My friend Sabra put together a private class at Citrus Pear dinners over the summer, and I was stoked to try it out. You head to a local grocery store, stand at a table for 2 hours, and go home with 20 freezer meals that are tasty and healthy. No shopping, no cooking, very little chopping, no raw meat touching, and no clean up. For a very reasonable price. This sounded like a lifesaver. 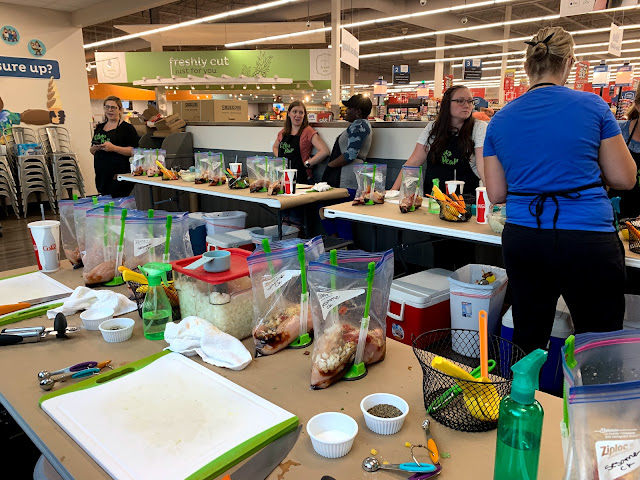 Every station is set up with all the tools you need (juicer, knife, can opener, etc), salt, pepper, chopped onions, and a cool little doodad that holds up a ziploc bag. They come around and prop up the bag that contains the raw meat, then they dole out the rest of the ingredients, either canned stuff or a veggie to chop or spices. You dump everything into the bag, shake it up, seal it, pop it into your cooler and go on to the next. It's a very efficient system. 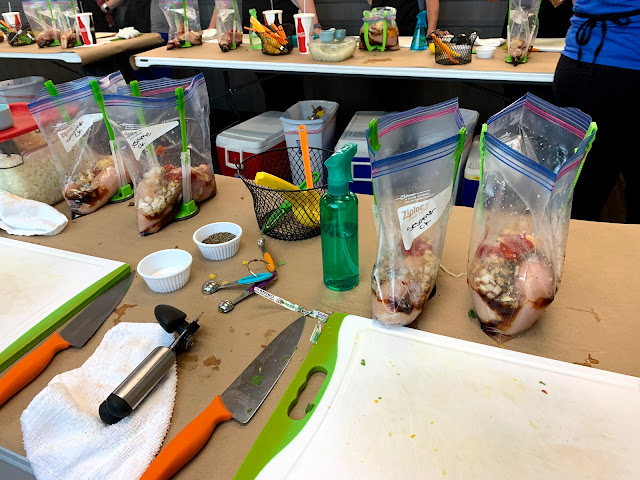 In two hours I made 10 different recipes times 2 bags to equal 20 meals. They also email you a recipe sheet so you know how to prep (basically dump it into your crockpot or instant pot) and add maybe a couple other fresh ingredients to your meal. So easy and totally worth it!

Heather was my workstation buddy. And Sabra and Krystle came, too. 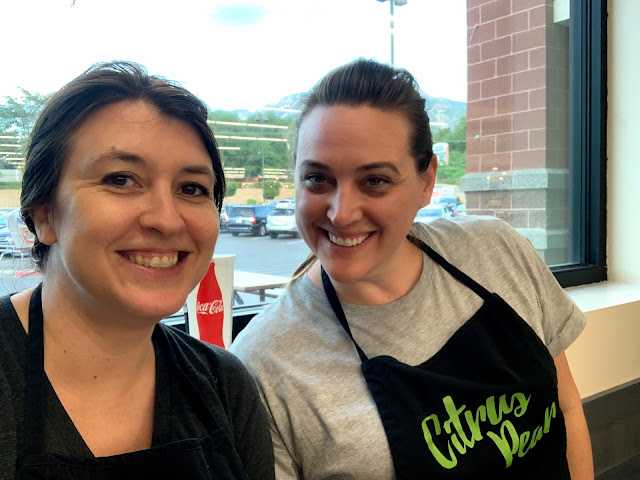 Let's taste the meals before I sign up again, shall we?

Tried this first since you only need to add rice, and we had that on hand. I added fresh broccoli into the crockpot halfway through instead of the frozen bag they gave us. I was a little worried we wouldn't have enough for both me and Anthony to have leftovers for lunch the next day. I added some extra rice to the portions to fill it up. The flavor was good (yay ginger!) and I'd give it 4 stars (out of 5).

Another easy one, just add rice, and I happened to throw in some fresh zucchini for the last bit of cooking. As with the beef, they recommend mixing some cornstarch into the sauce to thicken it, but that didn't really work for me. I also added the additional recommended spices at the end to kick it up a little. Good flavors, but it tasted like a frozen prepped meal that wasn't fresh. Which is SO convenient, but I don't want all the time. Plenty of leftovers on this one. 3.5 stars

I was a little skeptical on this one, since I like classic tomato sauce flavors, and this recipe adds smoked turkey sausage links. I liked it pretty well, though. The sausage had a little bit of kick, which is nice. We only got 2 heaping portions from it, maybe could've gotten 3, because husband likes tons of sauce on his pasta. 3.5 stars

I didn't get to eat this one fresh outta the crockpot, rather a couple days later from the fridge. Still tasted pretty good. I had defrosted this one well, but I wish I'd cooked the beef a bit longer. It was a tad chewy. The sour cream you add at the end really helps it. 3.5 stars

Favorite so far. The chicken is flavorful, and then when you add in all your favorite toppings, it turns out well. We had enough for 2 dinners - we did tostadas with some beans, sour cream, cilantro, green onions and fresh tomatoes. 5 stars

I love sesame flavor, so I'm always game. I didn't get too much of the honey flavor, though I remember dumping in a pretty good helping of it during meal prep. The chicken turned out tender, and we topped it with green onions and served with a side of green veggies. Solid leftovers too. 4.5 stars

Along the same lines as the penne dish, I just like classic flavors with my pasta, so adding chicken and cajun flavors is not something I would pick. However, this was quite good! The sauce is a little creamy with good flavor, though I think it should've been a little spicier, which I would have enjoyed. Still, a surprising win for me. 4 stars

I bought tortillas for this one to do tacos, and we thought about doing nachos with it, or you can add broth and make a soup. Even without the broth it had quite a bit of liquid in the pot after cooking, so I added it to a bowl with some fresh ingredients and used chips to shovel it into my mouth. The green chiles in this give it a different flavor than the previous chicken lime tacos. Not much for leftovers, but pretty good. 4.5 stars

I grabbed some Trader Joe's frozen garlic naan for this and made sure to add extra spices to the slow cooker at the end. It really made a difference with those extra spices, and luckily I had curry and masala around. This one was okay, and even though we had leftovers, I don't think we ate all of it. 3 stars

I didn't get to eat too much of this one for some reason, but it was pretty tasty. We made tacos with the meat for dinner. Not a lot of leftovers, which Anthony took to work for lunch and used chips to soak up the rest of it. 4 stars

Would I do it again? Probably. The chicken dishes would definitely taste better if you have a chance to brown the meat first, instead of getting that chewy slow cooker texture. Maybe an instant pot would help? Either way, this is a time saver and it's so great to just have meals on the ready that will give you leftovers.