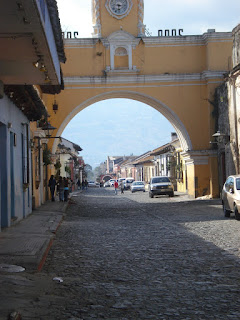 Our 9-hour bus ride wasn't so bad, I suppose.  We got into Guatemala City in the early evening on Monday, and of course all the bus stations are in the sketchiest part of town.  But really, is there anything but a sketchy part of town in Guat City?  No.  We had arranged to catch another bus to take us another hour out to Antigua, but it wasn't anywhere to be found.  I guess we didn't understand that even though we had a "ticket," we were really just waiting for a man in a taxi to come pick us up.  Finally the lady at the ticket counter at the bus station got on the phone for us, just as a little man ran into the station holding a cardboard sign with my name on it.  Sweet!  He was 2 hours late and apologized profusely; even though we were starving we didn't really care too much. 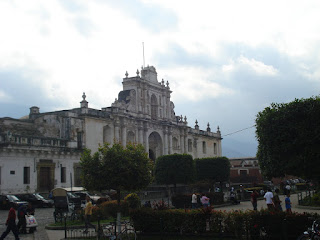 Antigua is a beautiful colonial city, quite different from the rest of the country.  Tim and I looked up a restaurant in our guidebook that sounded good, turned out they had a hotel too, with rooms open.  It was 10pm, we were ready to crash and it was good enough for us.  We spent Tuesday morning wandering around the city, and since we couldn't make the volcano hike we decided to book tickets up to Lake Atitlan for that same afternoon, since it's one of the most beautiful bodies of water in the world.  Or so they say.  I grabbed lunch at Pollo Campero, ran back to the hotel to grab our bags, and our shuttle picked us up for the ride to Panajachel. 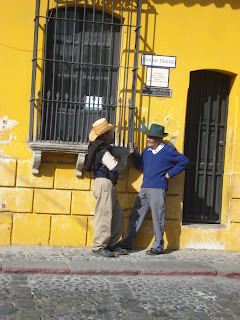 The ride up to Atitlan is probably the scariest vehicle experience I've ever had.  We were smushed into a 15 passenger van with several Europeans, twisting and turning through 180 turns that were steep as anything, often curving and rising at the same time.  Our van driver had 2 friends in the front that he kep laughing with, taking his eyes off the road.  Um, not good techniques buddy!  However, I seemed to trust him more than I would trust myself driving on that road.  I kept reminding myself that our driver had been up and down hundreds of times....he's got experience, right?  I could only hope that el Lago would be as beautiful and cool as promised, cause 3 hours on that trip for nothing......I wouldn't exactly be a happy camper. 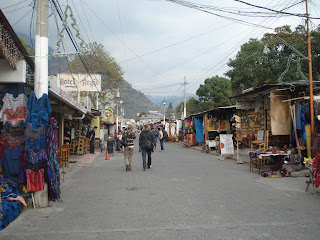 Finally, we made it!  We unloaded in Panajachel, the main town around the lake.  As soon as we stepped out we were bombarded with children asking us where we were headed - San Pedro? San Marcos?  Come with us, we'll get you a boat to another town on the lake.  Tourism run by 10-year-olds is nothing out of the norm. 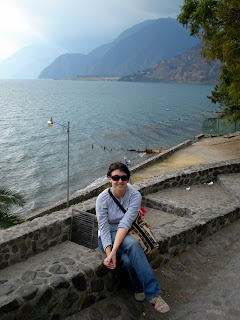 Pana is the main hub around the lake and by far, the town with the most tourist junk.  Vendors set up all along the main streets, people hassling you to buy stuff.  We let a guy take us to a hotel that had a "really good deal" and "free internet" which means they hang a wireless router in the hallway and if you happen to have a laptop, you can use the signal.  Whatever, it was cheap and had TV and we paid for 2 nights. 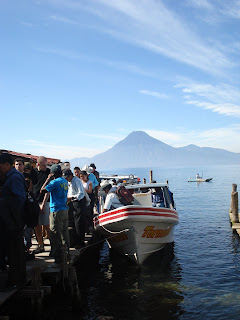 Since there's really nothing to do in Pana, we wandered around looking for dinner, which we found at an incredible little restaurant run by a Malaysian woman who speaks about 6 languages.  Delicious curry, fresh veggies, accompanied by street children who finally convinced Tim to buy an orange stuffed elephant.  The TV proved very handy that night as we were both drawn into the trainwreck that is truly the worst show ever shown on television.  But we couldn't stop praying that another episode would come on as soon as one ended. 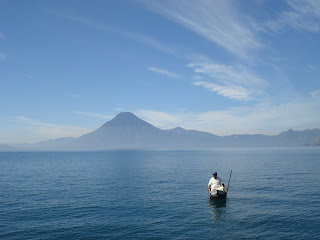 Tuesday morning we headed out to San Pedro, a little town on the opposite side of the lake.  Our Swedish friends who we met in Belize ended up spending 2 weeks in San Pedro because they loved it so much, so we were excited to get over there.  It's a little hippy town, full of yoga studios and Spanish language schools.  Our boat driver that morning was probably 14 years old, and kept closing his eyes and seemingly nodding off on the drive.  Hmm... Comforting.  But I got great pics of the lake! 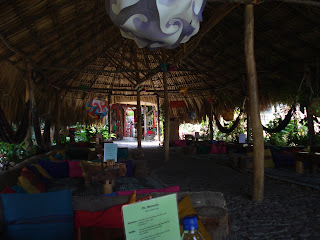 There's not a lot to do in San Pedro, since it's pretty small.  We stopped for a beverage, bought some pastries from the women on the street and meandered down to lunch at a hippie cafe for a leisurely lunch.  On the way we passed a man who asked us if we wanted to ride horses.  Which we kind of did, but kind of didn't, so we half-heartedly promised to find him later. 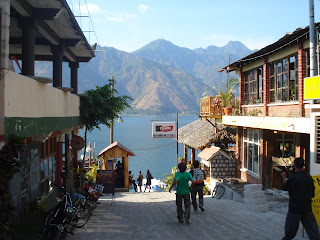 After lunch we wandered down to the water , looking for a swimming hole.  Except the beaches aren't really great and many of the townspeople were taking their weekly baths and washing their clothes.  We sat and read for a bit, but got itchy to get somewhere and do something.  How on earth did our Swedish friends spend 2 weeks there?  More patience than me, I guess. 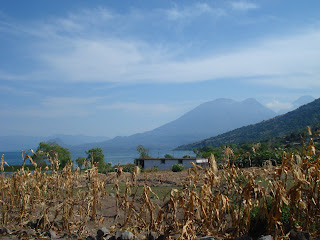 We hopped on the 4pm lancha back to Panajachel, once again to brave the street vendors hassling you every 5 minutes to buy something, beautiful gifts for my mother, etc.   At least happy hour at Pana Rock (where bad music goes to retire) had cheap, super fresh limeades.  We found a travel agency to book a shuttle for Thursday morning to take us to the famous market at Chichicastenango and wondered what to do on our last day in Pana. 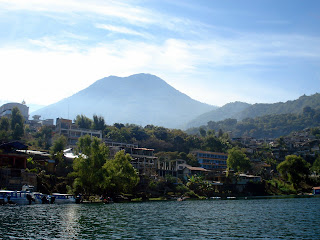 Super late....haven't had time to catch up on all the Coachella research I should be doing!  Just a month to go.
Sadly, Bon Iver won't be there.  And I'm not trekking to Bonnaroo to see him.  But his new EP is so good.  I'm in love.
Enjoy Blood Bank.

The CVDPs Get Me Everytime

I was terrible at ordering lunch today.
I'm in one of those weeks when nothing sounds good to eat.  Lunchtime rolls around, my tummy's growling, but I can't think of anything appetizing.  Usually I hit this marvelous place every day for good and cheap stuff, but not even that's cutting it.
I've been craving a cherry-lime slush from Sonic lately.  It's warm outside, it's more than appropriate to quench the thirst.  I wanted one last night on the way home from the Adele concert (she's amazing, btw) but it was too late and they were closed up.  I wanted one two days ago, but held off cause I already met the sugar quota for the day.
But today!  Perfect - I'll go to Sonic, get a slush and find something else of substance to eat.
Except as soon as I pulled into the parking lot, the old stand-by, Cherry Vanilla Dr Pepper floats into my head.  Sonic is the reason the DP corp started canning their own version of the stuff.  And last weekend I went to Sonic for a Cherry Vanilla DP one afternoon, and they gave me a Coke instead.  Fail.  I really, really wanted a DP at that moment and they didn't give it to me.
So at the last second after I pushed the order button today, I decided to have Sonic make it up to me and bring me a real CVDP, but what I really wanted was a cherry-lime slush.  And the food didn't look good, so I just ordered the #1 combo.  Which turned out to be a hamburger and what I really wanted was a cheeseburger and I forgot to ask for it without lettuce.  The problem with Sonic lettuce is that it's not one giant leaf - it's all shredded.  Very hard to remove.
I had to pick the lettuce off my non-cheeseburger, went to grab a tater tot and found a solidly frozen one, and drink my CVDP, which is always good, except when I really wanted a cherry-lime slush.
Sigh.
What's for dinner?
- March 11, 2009 2 comments:

Forget that I have a hot tub in my complex.
Fifteen minutes in that is life-changing, I tell ya.
Ready for sleeeeeeep.....
- March 09, 2009 No comments:

I really can't help it that I love Kelly Clarkson.
She's had some good tracks over the years, but I've never purchased an album until now.  And the nice thing about preordering on iTunes and having a 3-hour time difference with the east coast means I got to download it at 830pm on Monday.  Granted I've been listening to a free stream all week, so I know all the songs, but I'm glad to have them in my hands so I can take them everywhere.  You can bet I'll be singing loudly on the drive to work tomorrow.