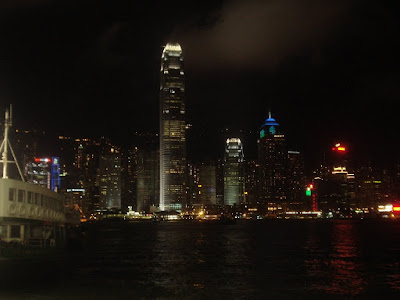 From an email I wrote while I was recently away on a work trip:

This may be the coolest city I've ever visited.


It's not nearly as overwhelming as I thought it'd be. It's like NYC. But with more Asians. And announcements in Chinese. And skyscrapers and mountains and forests. Cleaner, VERY organized - these people queue up for the bus and subway like no other. I've never been more crammed into a train, but getting on - hundreds and hundreds of people on the platform waiting to board, all in perfect queues, lining up exactly where the doors would open. It's all very comfortable and familiar. As different as this part of the world seems, it's really a lot the same. 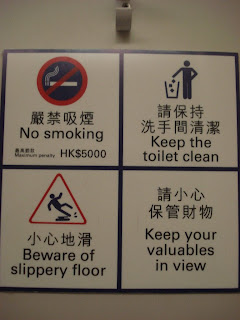 There are lots of rules, as you can see from one of the signs. One of the first I saw at the airport - Take Care of the Children and the Elderly. Good advice, no?

I thought I was going to be detained by the HK authorities at the airport, as my passport seemingly expired in 2002, though a note in the back points out that it was extended. Not good enough for the passport control agent. He called someone who came up and said "Please come with me..." and wandered off to the security control center. Great. He took my passport into a back room for a few minutes, came back out, asked for more ID and was eventually satisfied that I'm not a terrorist traveling on a fake passport.

I'm staying with my friend Jean Ann for a few days before work stuff starts next week; she's been here a year and a half, working for Exxon Mobil. If you've been watching the news the last couple days, you'll see they just posted a record profit. And I'm reaping those benefits, staying in a gorgeous corporate apartment that rents for a ridiculous sum of money and has daily maid service. Thank you, Facebook, for letting me stay in touch with these types of people.

I'm all for globalization, but it errs a little on the ridiculous side when there's Bubba Gump Shrimp and Popeye's. Seriously? 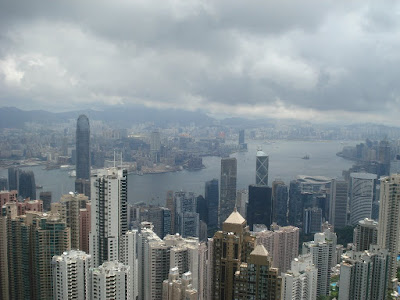 I spent half of the first day on the Peak - the huge hill on HK Island with amazing views of the whole city. Made friends with Indians, Koreans, eastern Europeans. Wandered through HK Park, where (and I have to laugh at this, am I terrible?) I just had to find the Fighting SARS Memorial Architectural Scene. It rained for a good couple hours; I got soaked, as I left my umbrella at home. 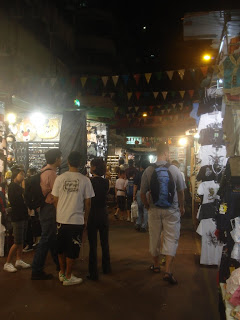 I wandered off to the night markets on the other side of the harbor this evening, bargained for stuff I don't need in a language I don't speak. For a whopping 40 cents I took the Star Ferry back across Victoria Harbor, probably the best thing of the day. Cityscapes at night always amaze me.
To sum it up - I could easily live here. Easily.
- August 25, 2008