Best of the NW Part 1

August brought new travel territory. The lovely J had an invite to a wedding in the Columbia Gorge in Oregon, and it was the perfect opportunity for some Georgetown Henle 8 reunion action in a place I’d never been. I had looked forward to this trip for months and the Pacific NW delivered. Maybe because I happened to be there during the 10 days that it’s not overcast each year.

I flew into Seattle on Wednesday afternoon (thankfully US Suckways didn’t suck this time) and hopped the public bus to take the scenic route into town. Freaked me out when we went into a tunnel like we were a subway car, except we were on a bus. Didn’t know that was going to happen. Public transport’s the only way to go in a new town, really.

Jacinda was already waiting at Hotel Max, which is a super cool joint and has the most comfortable bed I’ve possibly ever slept in and very interesting hallways. Note one of the doors below. 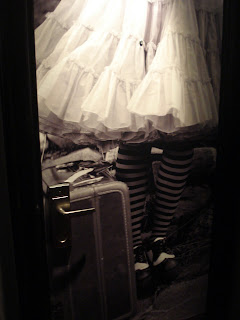 We walked down to the waterfront and took a stroll through Pike Place Market, though most things were already closing up, sadly. We grabbed an early dinner at the famous Ivar’s, and played with the seagulls. Man, those things are noisy and needy and will do circus tricks galore if you throw fries at them. Really entertaining; I think J and I could’ve sat there for a couple hours. Throwing fries into the water = seagull fight club. 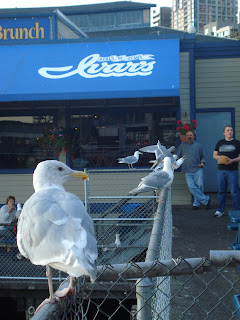 We called it an early night after some excellent sushi next door to our hotel. We had three cities to conquer in five days! 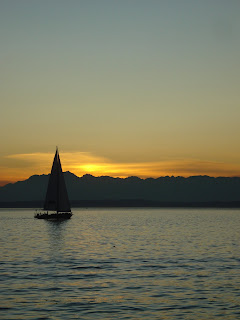 Thursday morning we hopped the monorail from downtown and rode over to the Space Needle. Jacinda is slightly afraid of heights, and the 43-second whooshing elevator ride to the top had her facing the back wall and squirming a little, but happily we made it to the top just fine. Certainly worth the trip. 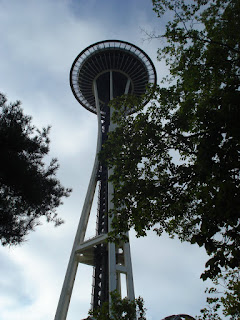 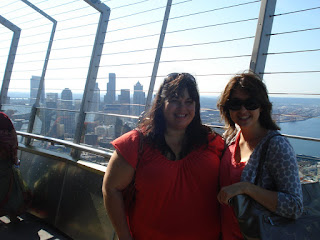 Next stop, a quick lunch rush to Salumi cured meats. This little place was started by Mario Batali’s parents, and voted by Anthony Bourdain as a place you must eat before you die. Its very limited hours meant that Thursday lunch was the only time we’d get a chance to try it. We walked to the neighborhood and saw a long line pouring out of a tiny building. Sure enough, that was it. We grabbed a sandwich to go, as we had to make it to the Bainbridge Island Ferry. 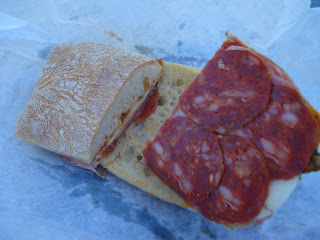 A guy behind us in line was wearing a Georgetown t-shirt. We excitedly asked him when he graduated, eager to trade stories, and he’s like – uh, I didn’t go there. Dumb.

Once on board the ferry, I opened the deliciousness in my hand and experienced a wonderful spicy salami with an olive spread. Definitely a spot worth hitting in Seattle.

The island was lovely, we walked around, had a soda or something, but had to catch the next ferry back to continue our journey. Rush, rush, and pack it all in. 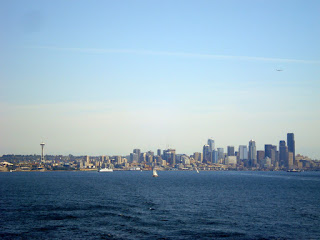 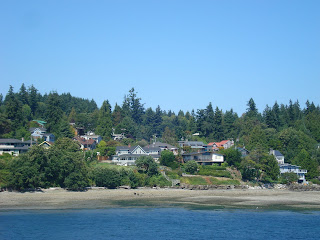 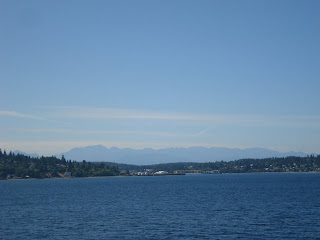 Downtown rental car pickup, check, way cheaper than renting from the airport. Off to Portland!

We drove 35 mph through most of the state. 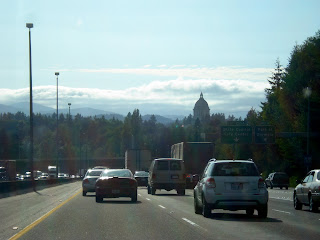 I had plans to meet up with a friend from high school for dinner in Portland, thankfully we arrived at a decent hour. Jacinda and I split up – she was off to meet some long-lost family, and I met up with Lacey at Jake’s. Fresh salmon stuffed with crab, shrimp and brie – a bite of that was a little slice of heaven.
I called Jacinda after dinner so I could meet up with her; Lacey dropped me off at Kelly's Olympian. Let's just say, me in my J Crew outfit was almost afraid to walk into a place after the seeing the sidewalk outside full of girls in Bettie Page outfits and dudes with stretched ear lobes. I needed to get about 6 more tattoos to fit in. One of the most incredible places I've ever been for people watching. Wow.
We woke up the next morning, ready to start exploring Portland. Oddly, I didn't feel like showering that morning. 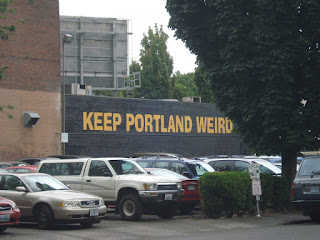 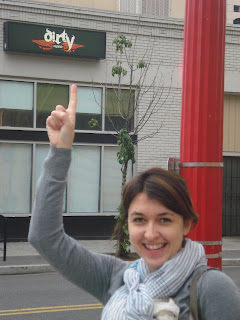 Saw lots of interesting things in downtown Portland. And a surprising number of young homeless people. I don't know if I lost the immunity I had to that after living in DC, but it was a bit disturbing. Is this some of this a hipster social experiment? Where are their families? Girls my age - homeless. Are they dealing with a mental disorder? Portland weather isn't exactly great - why there?
I'm not a fan of chain restaurants, but I've missed having Noodles and Company in Phoenix. On a slightly drizzly day, some comfy carbs made me happy. Hit the famous Powell's too. Never too many books.

I did have some of the best cupcakes of my life at Cupcake Jones. If there had been any homeless girls around at the time, I certainly would've shared my 6-pack. 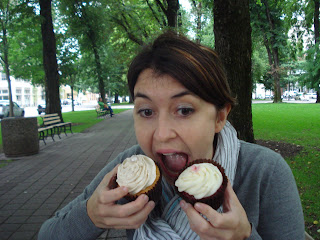 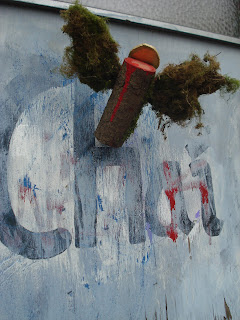 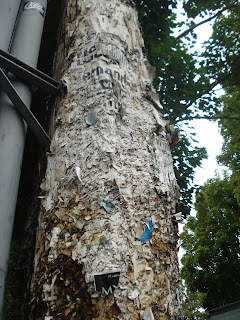 The essence of Portland, right there. A picture really is worth a thousand words. 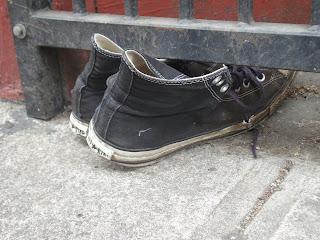