I'm incredibly lucky that I have a job that sent me to Australia for work.  Even luckier that I have a boss who used to live down that way and understands my need for travel and let me go early to explore her former home.

Despite thinking that I would fall madly in love with New Zealand and never want to come home (I mean, I did completely love it and must go back), I think I fell in love a little more with Sydney!  It's certainly a place I could see myself live and enjoy.  There are many reasons why it's one of the best places to live in the world! 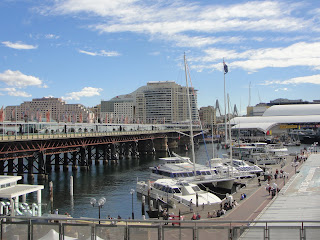 I arrived Sunday afternoon and after dropping bags off at the hotel in Darling Harbor, I jumped on a double-decker hop-on, hop-off bus to cram in as many sights as I could, since Sunday was really the only day I had for that.  Sadly, I got on the last bus of the day around 4pm, so I didn't really get to hop off anywhere.  Just once, so I could catch the other bus route that went out towards Bondi Beach.  I couldn't go to Sydney and NOT go to Bondi, right? 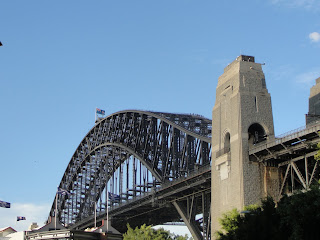 All photos were taken in motion, from the top of a bus, so they're not the best.  But they'll have to do!  Next time, despite my fears, maybe I'll have to climb the Harbor Bridge. 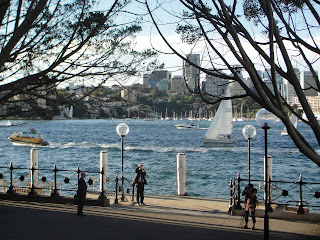 Ah, the Opera House!  The Kennedy Center of Sydney.  Smaller than I had expected, I think. 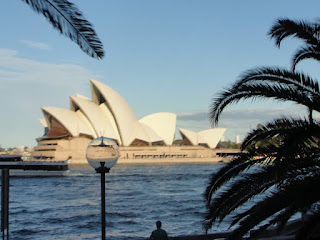 The Queen Victoria Building below is just beautiful - and it's a shopping mall! 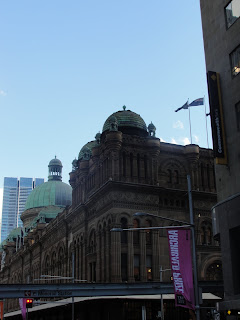 Caught the last bus to Bondi Beach and arrived just as the sun was going down.  I couldn't get off the bus to grab any photos, so they kind of suck.  Just another reason to get back that way.  And soon! 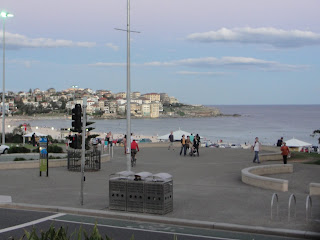 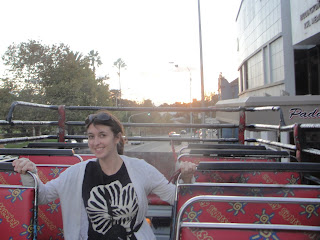 Monday morning called for work to begin, and after a quick 10-minute walk to the office, I was ready to move.  I love this town!  I loved being back in a downtown, vibrant business district, with people in my own demographic (same age, single-ish, social, semi-stylish, etc) out and about at lunch.  I swear everyone in Australia was blessed with the attractive gene.  Mega eye candy - men and women!  It was also so great to finally meet all these people in the office with whom I've worked via phone for the last couple years. 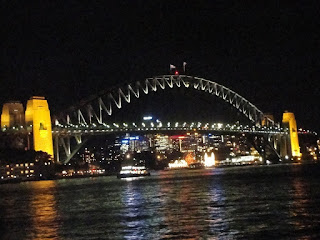 Most of my days were spent back and forth between the hotel and the office, though we did have a nice work dinner one night in Darling Harbor, walked around the Opera House area, and another evening my coworker from India and I took a ferry to Manly Beach to explore.  I'd only wish I could've seen it in the daytime!  I hear the north side beaches are great. Also a bit bummed that Le Kiosk was closing up when we arrived (after walking down a loooong path to get there).  I guess Tuesdays at 9pm aren't busy enough to stay open for late dinners, but I heard amazing things!  I had to settle for a kebab on the boardwalk before catching one of the last ferries back to Sydney for a night. 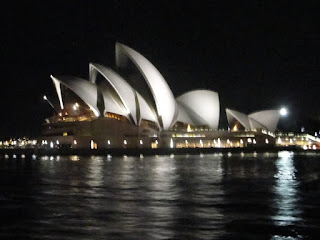 This is someone's view from an office window - um, coveted view!! 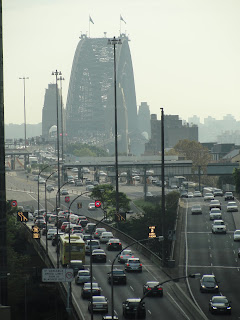 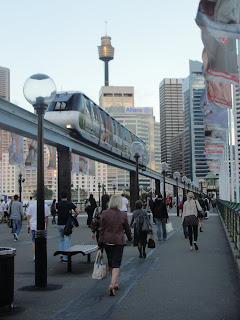 Most of the downtown shopping closes up fairly early, except on Thursday nights when they're open late.  It was my last night in town, so we made a team trip out of shopping.  Yes, Sydney is an expensive city, but I was amazed at how much goods from the US go for in department stores.  After import taxes and exchange rates - you really want to pay $450 for that pair of jeans that is $150 in the US?  Even the drugstore shampoo and makeup that I buy here for $5 a bottle is about $18+ down under.  I would have to get lots of care packages from home if I ever moved there!

I did find lots of less expensive goods at the airport to take home as souvenirs.  Thank goodness World Market carries Aussie licorice!  The apple flavor is beyond amazing.  Mango and raspberry, also delicious.  I think I need to pick some up very soon. 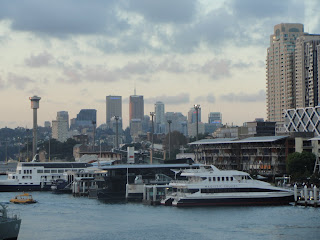 Before I knew it, it was back to the hotel on Friday around noon, quick jaunt to the aiport, and back on a plane to San Francisco where I'd have to sit for 8 hours since they wouldn't let me take an earlier flight back to Phoenix.  Exhausted, in sweats, but still sitting in first class! I'm sure I was a sight to behold....Thanks, OZ, I'll be back soon.  Next time, Gold Coast, Melbourne, Whitsundays, and koala land!!
- December 10, 2010