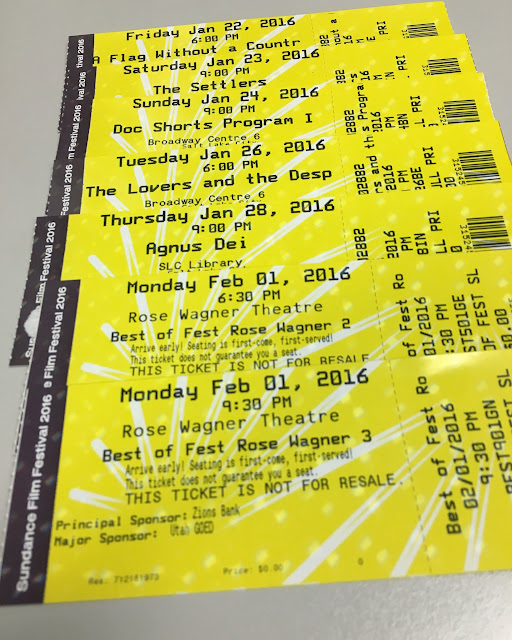 I didn't move to Utah in time to really make the 2014 festival, and in 2015 the ticket process and Park City hoopla was still a bit overwhelming for me, and a friend had an extra ticket for one film that year and it looked terrible, so I never felt too bad about missing the festival. But something switched in 2016 and I researched and read and realized that a main ticket office is three blocks from my house, so let's do this!

And the most beautiful thing is that all the films also show in SLC, most within a 2 mile radius of my house, so I don't even have to deal with Park City (parking and shuttling to theaters, celebrity hoopla, whatever). I bought a number of tickets in advance and did waitlist for a couple more, and here's what I saw. I honestly enjoyed every one of these.

1) A Flag Without a Country - documentary about Kurdistan. And then you can watch Helly Luv's music video.

2) Halal Love - a hilarious take on romantic relationships in the Muslim world. Apparently some Shia Muslims do temporary marriages. I think I'd like to try that out.

3) The Settlers - a solid look into contested land in Israel, and those Jewish settlers who claim the West Bank land as theirs. This one was long, but I was glad I saw it.

4) Embrace of the Serpent - already an Oscar nominated film, I saw this one at midnight. How cool to be such an explorer.

5) The Lovers and the Despot - I'm fascinated with North Korea and I found this story absolutely engaging. It's almost unbelievable - the story of a South Korean movie star and her director husband, making films for Kim Jong-il.

6) Sand Storm - this might've been my favorite film, these stories of women.

7) Agnus Dei (The Innocents) - So beautiful and so sad. The story of a convent in Poland after WWII, where a number of nuns were raped by Russian soldiers.

8) Jim: The James Foley Story - this won Best of Fest and as a local, I had free tickets to two festival winner screenings. Another sad story, but important to see.

Flicks I'm looking forward to seeing as they emerge in distribution - the Anthony Weiner documentary, A Good Wife (Serbian film, Balkan war stuff), The Birth of a Nation, The Lobster, and Manchester by the Sea (hey, Coach Taylor!).

I did see Rams recently (lovely and sad) and my favorite movie of the year (missed it at Sundance, have seen it twice) - Sing Street! Do yourself a favor and see it. It's delightful and you'll love it.