Only four months later am I able to conclude my January trip....pathetic. Since then I've been to Puerto Rico, Mexico, Chicago and Coachella so....lots of catching up to do. Not that I care if you read this, I just want to remember it for myself and have Google keep it until I die.

So....back to Guate! Panajachel, last day. Up to the big market on Thursday in Chichicastenango. Our shuttle picked us up in the morning outside our hotel and we hopped in with a few other tourists to make the 90 minute drive to this amazing (oh so we hard) marketplace.

But before we left I had to buy a jacket I had been eyeing during our walks up and down Pana's main streets. I have a thing for stripes and colors, and I noticed this jacket hanging outside a stand. I stopped to talk to the 2 boys who were running it and tried it on one evening. But I really didn't want to make another trip to the ATM and was attempting to stay on some sort of budget, so I walked away. But the next morning cute little Juan or Jose was still in my head so I went back and bargained down to however much cash I had left. Voila! Offer accepted by the 10 year old and I now have a jacket that's wool and too warm to wear at any point in time in Phoenix. Oh well. 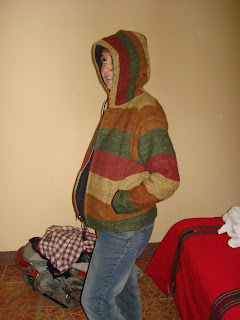 We survived the drive up to Chichi and pulled into a gas station parking lot full of other shuttle vans coming from all directions. Apparently this was going to be a big deal. 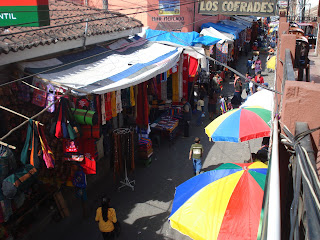 Or maybe not. More of the same. Get hustled on the streets by children. Same colorful textiles that I don't need. Tim and I walked around for a bit and finally sat down in a cafe to kill some time until our 2pm departure. I think the market had been overhyped by our Swedish friends from Belize. Or maybe we were tired. Or didn't want to hit another ATM and get more cash. Or carry anything else home. But the market, not all that great, even though Lonely Planet lists it as one of the Top Ten things to do in all of Central America.

Chichi is an interesting town in that it's a hub where Catholicism and Mayan beliefs mix. We heard many people speaking indigenous languages, especially the guys who were selling some gimmick and getting people to gather around in circles. Sun, moon and stars all woven in with creation and the story of Jesus. Interesting stuff. 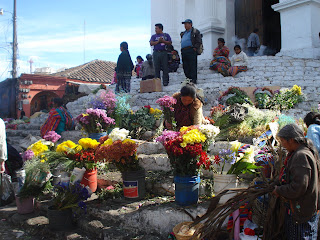 Lunch time is where my could've-ended-terribly-story began. Tim and I had to fly out of Belize City on Friday afternoon at 330. With no plan to our travels, we kept going further and further into Guatemala, away from Belize City. The distance may not be that far, but factor in being up in the mountains, one main road that's not always paved/straight/blocked with armed gangs, and no direct flights....yeah... we had a bit of traveling to do since we had made the decision that we just HAD to see Chichi on a Thursday. Specifically, we had to:
1) Leave Chichi at 2pm on Thursday in a shuttle to get back to Guatemala City (3-4 hours away).
2) Sit through shuttle connection in Antigua on the way to Guatemala City
3) Guatemala City - catch an overnight bus back to Flores, near Tikal
4) Change bus in Flores at 7am on Friday
5) Arrive back in Belize City at noon
6) Take cab to airport outside Belize City
7) Catch flight at 330 back to NYC
8) Arrive at JFK at 1am and subway back to Brooklyn

Tight connections, especially for Latin time and no published schedules. But we had decided to do it and made all the arrangements.

Except that our Thursday lunch, killing time from the market in Chichi, something hit my stomach. I had eaten street food the night before. 3 tacos for less than a dollar. Grilled in front of me, all the toppings I wanted. Gotta eat like a local, right? Oh no....my stomach was NOT happy. And I wasn't sure through which end it was going to manifest its unhappiness. I left Tim at the table and paced outside, trying not to puke.

You should know I hate puking more than ANYTHING in the world. I will do anything to avoid it. I had some Pepto, but that wouldn't even cut it. I couldn't get sick. Not with my crazy travel schedule. Being on a bus for hours and hours overnight. Going back down the windy, mountainous roads. Can you imagine? I was starting to panic.

We paid the bill and I ran into the closest pharmacy, begging the ladies to give me something for my stomach issues, explaining that I had to get on a bus and airplane over the next 36 hours and I couldn't be sick. A girl handed me a box and told me to take a pill every 12 hours hours. I have no idea what it was/if it was FDA approved, but I didn't care. I popped one right there and we walked back to the shuttle area to catch our ride home. 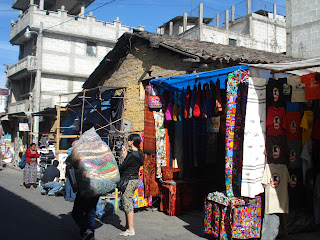 We had taken one shuttle up from Pana, but had to get our stuff from that van and find the driver who came up from Guatemala City so we could get to the bus station. Thankfully, that worked out well. I told the driver that I should probably sit up front or near the door since I wasn't feeling well. Still pacing......praying not to puke.

Our ride started and as we got into the mountains, one of the passengers (who had come up in this van) asked the driver if he had gotten the brakes fixed. Uh, WHAT?! It became evident very quickly that he had not, with his severe down-shifting and the burning smell coming from the van. Another passenger told me that they'd had to pull over a couple times on the drive over to let the brakes cool. Scary! I began to pray even harder. At least this prevented us from speeding through the hills and curves. And miraculously, we made it back to Antigua. Miracle pills kicked in, I was not feeling as sick anymore.

We had an hour layover in Antigua, before catching another shuttle to Guatemala City. We ran out for food and a fabulous sunset over the volcano. 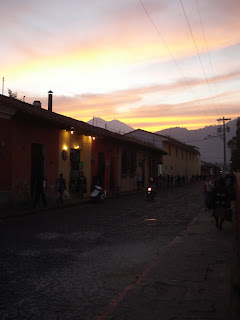 Upon our arrival back at the shuttle station/tour agency, we discovered our shuttle was late. We waited and waited and made friends with a couple from Spain who were in the same situation - needing to catch the overnight bus back to Flores. No one at the agency could get in touch with the driver, but he showed up in the nick of time. We made to the bus station as they were boarding the overnight bus to Flores. Whew. Although the bus was freezing (I almost stood up and took a group poll on turning off the AC) it was the Clase de Lujo - super deluxe. We had a bus attendent who brought us dinner, snacks, water, soda and made sure we knew how to transfer. Way to go, Linea Dorada.

We arrived all groggy at 6am in Flores, found our other bus, made the 5 hours back to Belize via the border crossing again, and back to the bus terminal/water taxi station in Belize where it was a humid 90 degrees. Since I hadn't showered in almost 48 hours, I went to a bathroom to clean myself up and change clothes and basically had someone accidently open the door to my stall while I was mid-sponge bath. Yikes.

We had just enough cash to get to the airport, paid our ridiculous departure tax by credit card and got outta Belize. Home sweet home to JFK at 1am after a crazy rush through Miami. Thanks American Airlines, for upgrading me to Gold status and letting me through the priority security lines. And muchas gracias to the farmacia with the miracle pills! My stomach lived happily ever after! 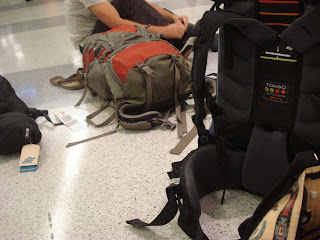