Valentine's Day (aka Flee Your Home)

I've spent the last few New Years abroad, as I think it's an overhyped holiday in the US. Do I really want to dress to the nines, venture out into the cold, pay a ridiculous amount of money to get into an open bar party that's too crowded that I'm not going to enjoy or get my money's worth? No. The rest of the world seems to celebrate in a more appropriate way, so I've been out exploring.

Same with Valentine's Day, especially when it falls on a long weekend. Even though I'd just gotten back from Guatemala and really didn't need a warm vacation in the middle of February like most East Coasters do (yay Phoenix winters!), I booked a ticket anyway after many weeks of indecisiveness. Helps when your travel buddy has enough hotel points for free stays, thanks to work trips. Puerto Rico, here I come!

It's a looooong flight. I guess I didn't realize how long. 5 hours to Miami (a terrible airport). Another 2ish hours to PR. At least I knew I was truly getting away. CRD landed a few hours ahead of me and picked me up at the airport in our rental car on Thursday night. Little did I know we were staying at one of the coolest resorts in San Juan, La Concha! Bomb diggity. We spent the evening in old San Juan, had great food, walked around and chilled in the hotel hot tub that night. 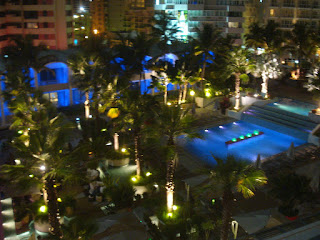 The next morning we set out to explore old San Juan in the daylight, including the big fortress at the edge of the water. I was feeling so-so about PR and didn't have many expectations, but I was blown away by the view from the hotel room the next morning. If I woke up to this every day, I promise I would never complain about anything again! 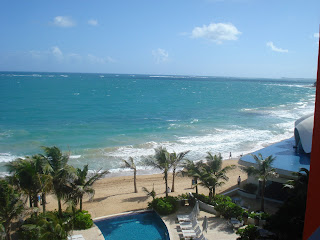 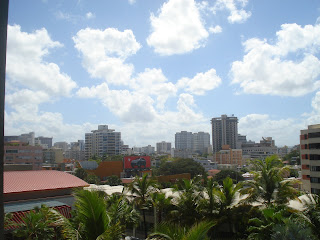 Friday morning we set out to Old SJ. It's a beautiful mix of cobblestone streets and a European feel. I was glad to be back in the small streets where cars just squeeze through. CRD put his driving skills to the test, especially since my usual parking karma wasn't getting us anywhere. 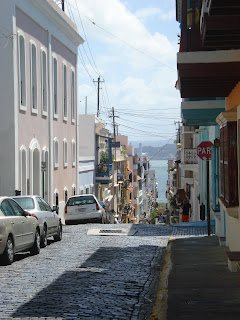 When we got to the fort area there was a group of school children flying kites. Tons and tons of kites everywhere. Prompted us to ask what the Spanish word is for kite, since neither CRD nor I could remember. And don't ask me now, as I've forgotten. The water around the fort was amazing - some of the most beautiful I've seen, only second to southern Portugal. 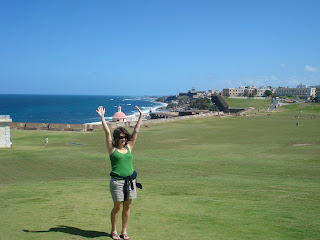 We had to wrap up old SJ quickly so we had time to hit El Yunque rainforest on the way to Fajardo and the Vieques ferry that evening. El Yunque is the only rainforest in the US Park Service system, so I guess that was kinda cool. It's gorgeous! You basically take a highway to a little town, turn off and drive up a mountain into the rainforest. We stopped at a viewing tower to take it all in. 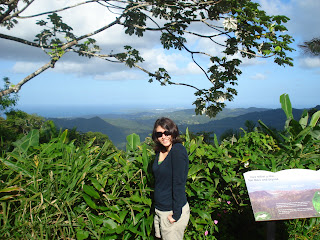 And we also took a 30 minute trail walk into the rainforest to catch the waterfall. Cold! I don't do cold water. But CRD gladly jumped in. He gives it 2 thumbs up. 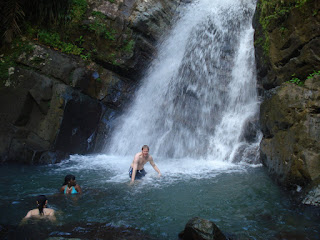 After wrapping up the rain forest, we hopped back in the card for the drive out to Fajardo to catch the ferry to Vieques, another island where we'd spend 2 nights. We had planned to return our rental car in Fajardo and get another one when we came back on Sunday, but considering we couldn't find the rental place to return it, we extended our rental and parked at the locals parking lot. Would've been cool to arrange to take our car on the ferry, but we didn't think about that far enough in advance. PR is a place where you kind of need a car, so we had to rely on some "shuttles" that run around Vieques that are usually only around when the ferry arrives/departs. We landed in Isabella Segunda on the north side of the island and got a ride down to Esperanza in the south. Our arrival was around midnight, thankfully our guest house left a key for us on the office door and gave us instructions to find our room.
Saturday morning we headed out to explore the awesome beaches of Vieques. Except that you need not just a car, but a four wheel drive vehicle, to get to most of the good ones and we didn't really realize this. We asked about renting bikes and the locals looked at us like we were loco. They gave us a map and told us some closer beaches where we could walk. And they were beautiful. But we were still determined to get to Blue Beach, apparently the best one on Vieques. We came back into town for lunch and struck up a conversation with a couple visiting from NYC. They happened to be going to Blue Beach that afternoon and had rented the last vehicle on the island for the weekend and offered to give us a ride. Score! 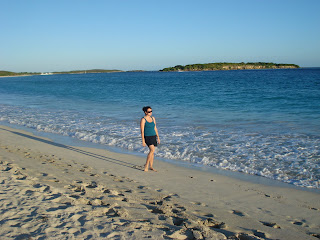 The sun went down way too quickly, but we had a good couple hours at Blue Beach. And yes, you really do need a good vehicle to get there. The Navy used Vieques for bombing exercises, so once you turn off a paved road, you're on your own through the dirt and the bumps and rugged terrain. And don't venture off "the path" cause who knows what kind of remants are left. It's amazing that such beautiful places exist amid a bombing ground. 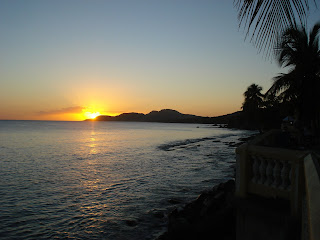 CRD had booked reservations for the Bioluminscent Bay for Saturday night. The tour bus was supposed to pick us up at our guest house at a certain time, so we putzed around looking for a grocery store and snacks to give us enough energy to swim in the glow in the dark water. However, right in the middle of our snack buying we got a call that the bus was waiting for us and we were late. We booked it back to our house, running in flip flops and barely made it. We hopped onto the old school bus which was totally full. I grabbed the first available seat, not even realizing that a few people I knew from DC were on the same bus! Granted, I knew they would be in PR that weekend and Vieques is really small, but I didn't really expect to run into them at that moment.

We made it out to the Bio Bay just as the sun was going down. Our little barge took us out to the middle of the bay, and once the sun was completely down, we got to jump in. And when you jump in, you GLOW. Yes, you glow in the dark like a super hero, thanks to the little microscopic creatures that view disturbances in the water as predatory, and they light up to warn others about the impending danger. Really cool stuff! And sadly, next to impossible to capture in a photograph. You'll just have to go. 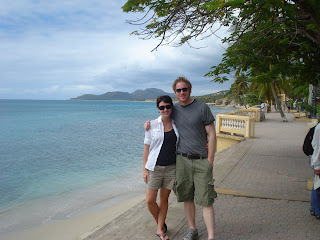 Our group had heard that Sunday brunch was excellent at a certain restaurant, so we went for waffles and other delicions things. Except they were working on the sewage system out back and our breakfast smelled like....well, you can guess. Despite being an open air establishment with fans blowing, we all kinda lost our appetite. 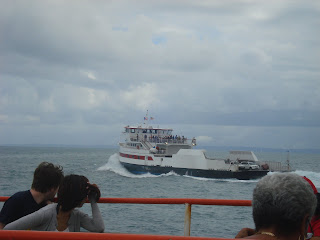 After breakfast, it was time to head back to the ferry and back to San Juan. We didn't see any taxis/shuttles around, so we pulled out our guidebook and looked up a couple private drivers who were listed. CRD called the first one on the list, asked for Pedro, and was told that Pedro had died a few months before. Awkward! Finally we saw a guy driving through the streets, so we pulled him over and hopped in.
Our two hour ferry ride back to Fajardo cost all of 2 bucks. Awesome.
The other DC group wanted to go to El Yunque on the way back to San Juan, and CRD and I wanted to spend a little more time there, so we made another stop. This time we drove to the top of the mountain and I pretended that there were gorillas in the mist. 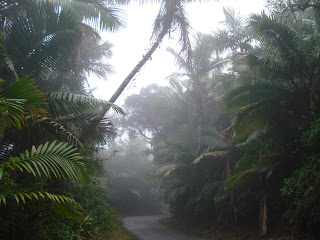 We spent our last night in San Juan at the same hotel that our other DC peeps had booked, but we were too exhausted to really party it up. Sunday night called for ordering a pizza and watching the NBA All-Star game. CRD and I had a little time the next morning for some beach chilling before our flights. We drove a little ways into SJ and started walking. It was early enough in the morning that no one was really around and soon we stumbled upon some beach chairs at a hotel. Ah, what the heck, we'll pretend we're staying here, so we settled in and played the part. Soon a hotel worker came over and asked us to move, but simply because another guest had already reserved our row of lounge chairs. Whew, not busted yet. The guy even offered to set up new chairs for us, which he did, complete with perfectly angled chairs on the beach, a table, and fresh tables. As more people came out, I finally realized that it wasn't just any hotel we had crashed, it was the Ritz-Carlton. No way were we just gonna walk away when it was time to go, we had to walk through the hotel and pretend we were indeed guests. What better way to end a trip? 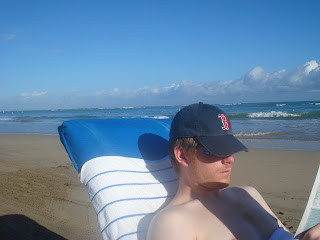