Trains, Planes and I Need a Break from Travel.....

About to take my 6th flight in less than 2 weeks. Headed to the 5th airport. Except my original flight was cancelled....and I've been sitting here for 4 hours and counting....thank goodness for power outlets (extremely scarce in the Phoenix airport) and Wi-fi.

A few days ago I almost missed a flight from Chicago to home, since the Blue Line was under construction. I had to get off the subway (or the L or whatever they call it there), take a bus with a driver who had NO idea where he was going, survive a few miles packed in like sardines, get back on the train while hauling my 2 suitcases plus laptop up multiple flights of stairs, get in line at O'Hare to check bags and arrive at the counter at 630. My flight left at 650. No way said the lady, unless I could carry things on. Umm....not possible. At the last second she noticed my flight had been delayed by 30 minutes and she could sneak me on! That made up for the fact that my newish iPod quit working the day before.

I got in my car on Monday morning and my car stereo was out. Are the musical gods conspiring against me? This can't be happening.... I went to the Apple store that afternoon without an appointment at the Genius Bar and was told they couldn't see me until Wednesday. Since when is swapping a defective product like going to the doctor? I went home, checked online, and found an opening that same day for an hour later. Only to find out they were out of stock..... I could drive around the valley for hours and try another store, but no time.

I worked a very long Tuesday, with no desire or energy to do laundy and pack to leave again today. Worked at home to try and get things organized. I have no idea what's in my suitcase. I'm now at the airport, waiting for the last flight of the night to get to Salt Lake. But I guess it'll all be worth it cause I'm coming home with a new sister-in-law, eh? 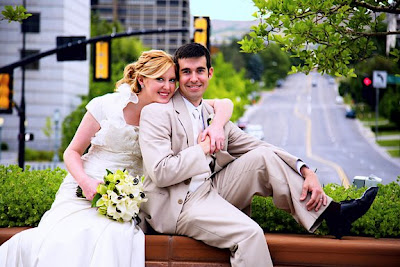 that is why i would just as soon drive to utah as fly. an 11-hour drive door to door is long, but often all of the travel and hassle involved with flying isn't much better.

hope you finally made it! i'm safely in palo alto. i'm glad we were able to connect during our mutual airport misery!

It could have been worse...you could have also had a hyperactive 14 month old who hates to sit still with you. I hav 4 flights with that little monster coming up over the next month...yay!!!