After a week of reliving high school, blueberry picking and working at dad's office, it was time to pack up and head back to Chicago. Yay! Chicago in the summertime, couldn't be better. My trip didn't turn out entirely as planned, but was still worth the trek. 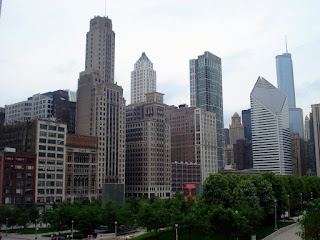 I flew in Thursday evening and went back to Kerri's, home of the coolest cats ever. I was on my own during the day Friday and decided to go for a run on Lakeshore, since that's what you do in the summertime in Chicago. I was a few miles away from Kerri's place when I saw huge dark storm clouds coming in. Time to head back, and quickly! I started to sprint and the rain started coming down. Not two seconds after I stepped back into Kerri's building, the HUGEST clap of thunder went bang right over my head and it started to pour like nothing I'd seen in a long time. How's that for timing? Side note - I was terrified of thunderstorms as a child and sometimes still am. The cats were cowering under the bed, and we kept each other company during the rest of the storm. I had wanted to go to the Cubs game that day....uh, right. It poured all day long. 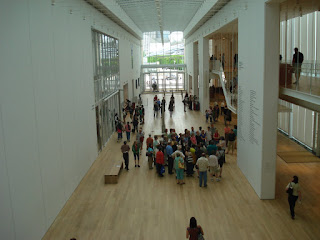 Finally in the late afternoon, the sky cleared up and I headed downtown to the Art Institute of Chicago, which is happily free on Fridays after 5pm. Eventually Kerri got off work and we met up for dinner and The Brothers Bloom, which I liked more than expected. 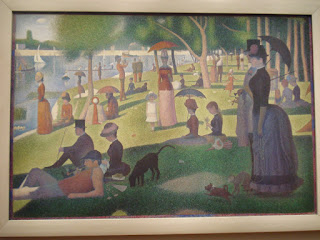 Saturday was time for the main event - Erin's wedding - the reason I came to Chicago! I met up with the rest of the Georgetown crew downtown at their hotel, and we taxi'd off to what might just be the most beautiful church I've seen in the US. Technically Erin and Sonny had gotten married a year before, since Sonny is in the military, but this was the full-on Catholic ceremony, and it was great! 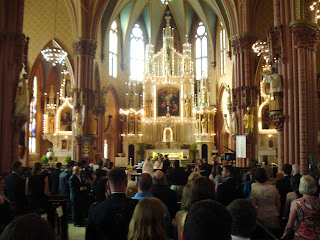 Erin looked amazing, coupled with men in suits with swords, and you've got a pretty awesome combination. 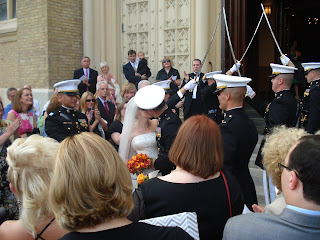 The reception was held next door at Erin's high school - yes, this courtyard below is not like any high school I've ever seen.....absolutely beautiful. We had appetizers and drinks in the gardens, then headed into the high school cafeteria (also amazing) for dinner and dancing. 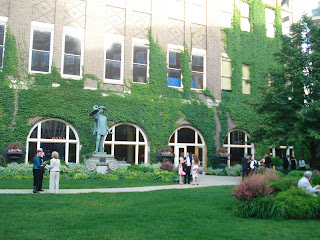 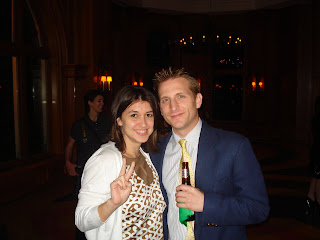 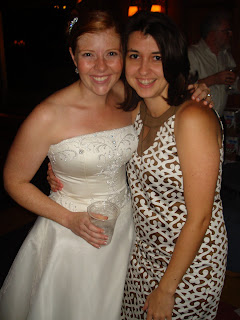 This was probably the most fun wedding I've attended - food was fantastic - Chicago-style pizza, Italian dishes, and delicious cakes and canolis, without the wait. Just a no-fuss, pick one of three buffet tables and eat what you want, when you want. I'm kinda relieved there was no ceremony to cut the cake or throw the bouquet. Erin knows how to throw a party - give the people food, dancing (and alcohol) and let them govern themselves. 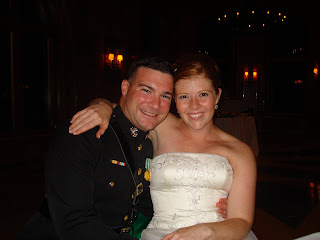 However, this guest below had a little too much fun. I watched him pull together 3 chairs to make himself a bed, then he laid down and passed out. Lots of cameras came out. Soooo funny. 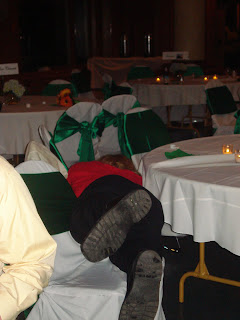 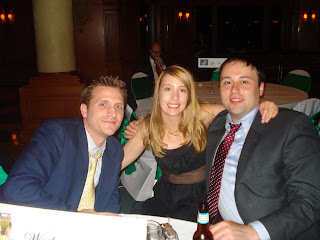 Erin and groom, breakin it down, just as they did when they met at Tom Tom. Yes, they know it's as bad as it sounds. But yay for a wonderful wedding! 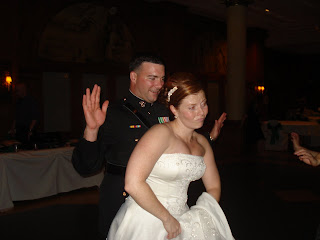 Sunday morning I just had to go back to Tweet before leaving Chicago, so that's what Kerri, Erika and I did. Always delicious. 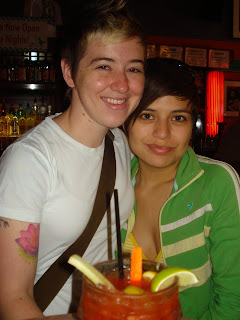 I said goodbye to Tegan and Lynx, and hurried off to the airport for my flight back to Phoenix. Except not without trouble. Apparently the Blue Line of the 'L' was under construction, and I had no prior warning. I had to get off the Blue line, haul my bags down a couple flights of stairs, find a shuttle bus, pack myself in like a sardine with other passengers with bags. Our bus driver had NO idea where he was going. Thankfully a couple locals were standing in the front and directed him through the streets where the Blue Line would've run. People missed stops and he didn't stop to pick anyone up, but finally we got back to the subway. Off the bus, up 3 flights of stairs with my bags, onto the train. 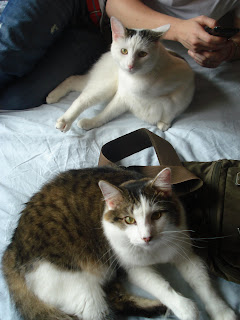 I still had many stops to go until I got to O'Hare. I finally got in line to check my bag at 6:15pm. My flight left at 6:40pm. I was in the First Class line and had to wait a bit to check in, so by the time I got the counter, it was 10 minutes til lift off. The agent said I could maybe get through if I could carry on, but that was impossible. I'd been gone for 10 days, had 2 bags, a laptop, and a purse. I finally asked her to rebook me for the next morning, since there were no more options that night. Ugh. Awful.

However, this amazing lady (Quinn, with American Airlines at ORD, you are awesome!) stepped away, made a quick phone call, and heard that my flight was delayed by at least 30 minutes. I think technically she shouldn't have let me check in, but she pulled some strings, took my bags, and sent me on my way! I was so relieved to get on that plane. For once, thank goodness for delays! Adios, Chicago. Wish I could've gone back in August for Lollapalooza, maybe next year. 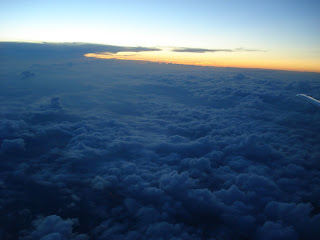