Apologies in advance for the ridiculously long post ahead.

After running around in Oklahoma and Chicago for 10 days, I was back in Phoenix for 48 hours – long enough to do a load of laundry (but only at the last minute, since I just couldn’t bring myself to tackle it right away). Then off to Utah for little brother’s wedding! Easily the biggest event in our family in quite awhile. I couldn’t wait to get there. However, US Airways had other ideas.

Scheduled to leave at 4:50pm on Wednesday. Arriving in Utah around 7:30pm. Old friend B was going to pick me up from the airport (since my family and Courtney’s family would be at the temple) and we were going to have a lovely dinner.

Except we didn’t get to do that.

I showed up at the airport, not checking bags since I wasn’t about to pay for them. I had my usual duffle, purse and laptop, which I lugged over to Gate C something. As soon as I get settled, I hear an announcement that there’s a gate change, all the way over in A something. From one corner of the terminal to the opposite corner. Fine. Lugged my bags, in my heels. Half an hour later, there’s another gate change. Really? Shouldn’t you just move planes around at this point, and not 150 people?

Then – flight delayed – mechanical issue. They’ll keep us posted. At this point it’s nearly 6:30. B texted me that he noticed my flight was cancelled online, before any announcement was made at the gate. I ran down to the rebooking counter and got in line first. Just in the nick of time – I got rebooked on the 8pm flight.

Just as I got settled in again to wait, laptop, movie, etc, they made an announcement that the flight was overbooked and they would take a couple volunteers. I only wish I hadn’t pulled out all my electronic gear so far away from the gate agent, otherwise I would’ve been there in half a second. It was only Wednesday, the wedding wasn’t until Friday, and I could’ve gone home to sleep in my comfy bed and not sit around and waste more time at Sky Harbor. Alas, it wasn’t meant to be. And not sure I wanted to fly US Airways after this point.

Around 7:45 it’s about time to start boarding the later flight. Except they’ve switched out the aircraft for a larger plane to accommodate for the earlier cancelled flight. The original plane had only required 3 flight attendants; the new larger one needed 4. And they didn’t have a 4th. They had to call one another crewmember, who then gets an hour to get to the airport. Seriously? Seriously?

About 20 minutes later they announced that a crewmember had been on call in the airport, we could board shortly. Whew!

At this point I’d lost my original awesome seat that I had picked, I ended up in the back sitting next to a car seat. My worst nightmare. I don’t do babies. Especially other people’s babies. Thankfully this one was mostly cute and slept the whole way. I even helped the mom getting off the plane. I touched a car seat! That’s progress.

So – on the plane, ready to take off. Except they have to call maintenance because there’s a problem with an overhead bin. ANOTHER DELAY.

Finally, finally, hours later, we take off. We land at 11:30ish. There’s a PROBLEM WITH THE JET BRIDGE. It takes another 20 minutes to fix that so we can actually deplane.

Sadly, I don’t have a photo of the one thing that amused me during this whole fiasco. While waiting for flight #1 I saw a man, imagine maybe Bill Nighy without glasses. From the neck up, this is what he looked up. From the neck down…um……yikes. I think he was a little confused.

A few people went up and chatted with him, took photos and he loved every minute of it. I couldn’t bring myself to do it. When I finally boarded our second flight, he was in the first row of first class. I still wonder who he is and have attempted to Google him. Surely someone posted those photos online under "phoenix airport crazy man heels black tight leather outfit".

My family was able to pick me up around midnight, and I knew that they had been at the temple earlier, a serene peaceful place. I got in the car, told them I would be remaining silent because I had nothing nice to say at that point and didn’t want to ruin their evening.

All that travel stress apparently manifest itself in physical pain. By the time I went to sleep I had seriously upper back and neck pain from hauling my carry-on bags and laptop through the airport. I needed some drugs and heating pads for the next couple of days and couldn’t really turn my head.

But on to the happy news! 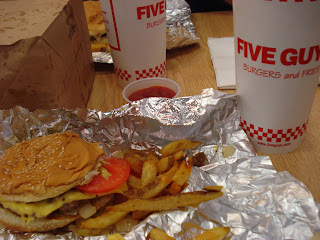 We had delicious 5 Guys for lunch on Thursday, which I had been missing since my last meal in DC. The debate was settled once and for all – 5 Guys > In N Out. Although I love a good animal style burger, 5 Guys wins for best overall. I sparked quite the facebook debate that day after I posted a mobile pic of my lunch. Mmm…

Courtney (soon to be sister-in-law) planned a girls’ night out at her nail salon – pedicures and manicures for all the ladies in the family. I asked her little cousin to pick out a color for my toes, little did I know she was in a blue and green-loving stage. I had to ask her to try again for something a little more pink or red.

After breathing in nail salon fumes for a couple hours, I rushed up to SLC to a rescheduled dinner with Brett. Delicious dinner at Takashi Sushi (this asparagus appetizer was fantastic), good company and conversation, and Beau Bridges was sitting behind me (apparently filming a movie with Alyssa Milano. Random). 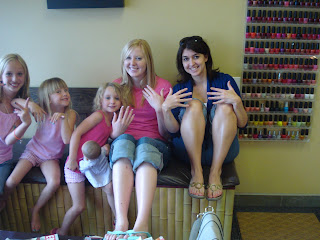 Small problem. I assumed that Courtney’s sisters and I would be wearing our bridesmaids’ dresses all day. I was scheduled to fly home on Saturday, so I didn’t pack a dress for church. Except I apparently needed one to wear to the temple – we were only going to wear bridesmaid dresses for the reception that evening. That meant I had to buy one and fast.

Courtney had scheduled hair appointments early Friday morning for my mom and me, so that was first up on the agenda. I’d have to tackle the dress issue later. We got up early so we could arrive right at 9am (I was still feeling the 8am Phoenix time – ah, mornings). A perky blond hair girl told me that she’d be doing my hair. A little too perky for 9am, but oh well. I settled into the chair and she set out to put my hair up. 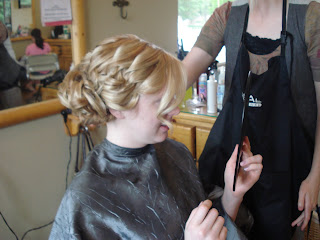 We did the usual small talk thing, but after a bit, I almost couldn’t hold in the laughter. No matter what I said in response to her questions – could’ve been anything about me being the oldest child, what I do for work, my stance on Obama’s healthcare plan, what I think about nukes in Iran – anything – her response – “So Fuuuun!” Emphasis on the second word.

I almost couldn’t take it.

She’s pinned and curled all my hair in place and started to hair spray. I don’t think I have used hair spray since 8th grade. I’ve got more in my hair at this point than in my entire life combined. Then she says in her perky, so-fun voice – “do you want me to spray glitter in it?!”

ARE YOU KIDDING ME?

What do I look like? A teenager going to my first school dance?

Finally it was over. My hair did look pretty good. And miraculously stayed in place for 14 hours, even in the rain. Well done, perky blond girl. 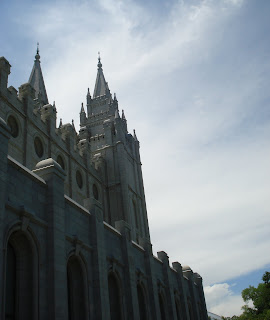 My mom and I drove back to the hotel so she could finish getting ready. She and my dad had to arrive at the temple early for my brother’s ceremony, while I ran off to find a dress in my super done-up hair, no makeup and sweatpants. Thankfully, Old Navy had a lovely black dress for 20 bucks that I could accessorize with a fabulous necklace and cardigan . Voila!

I drove up to the Salt Lake temple, found the rest of my extended family waiting outside, and we waited and waited and waited for Taylor and Courtney, the newlyweds, to emerge. Finally they came out around 3pm. Yay! I might have even shed a tear of joy. 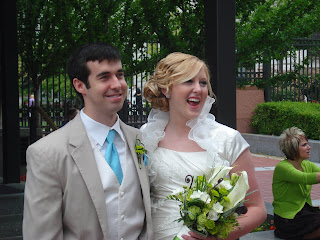 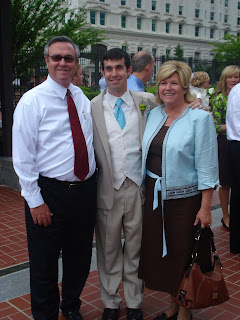 After herding the entire extended families for some quick photos, it was time to head to the real party at Thanksgiving Point. We had a nice sit-down dinner with family and close friends before the open reception started. All day it had been looking like rain – we had the option to move things indoors, but decided to enjoy the gorgeous outdoor garden in hopes that the rain would stay away. 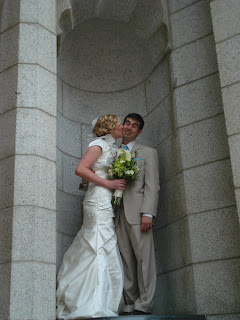 We had 45 minutes of great weather and a sunset once the reception started, then the wind and rain came in full force. Somehow cramming all the guests under a tiny gazebo right next to the DJ and cupcakes upped the fun factor. Even my dad danced. Or maybe I should say he attempted to dance. That’s saying a lot.

All in all, a very successful and beautiful day. Taylor and Courtney drove off into the sunset and lived happily ever after. Or so I hope. 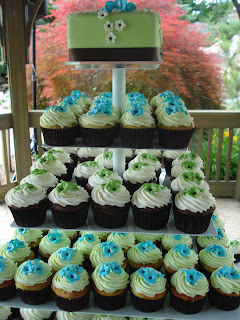 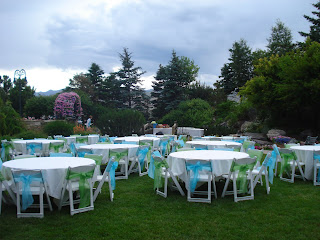 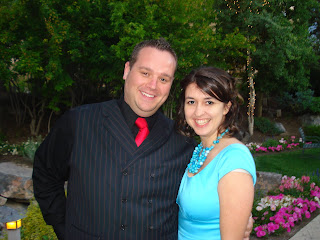 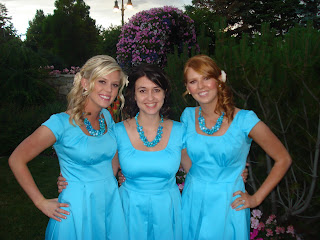 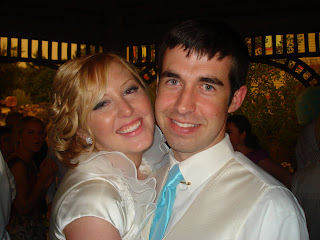 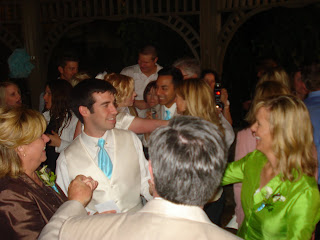 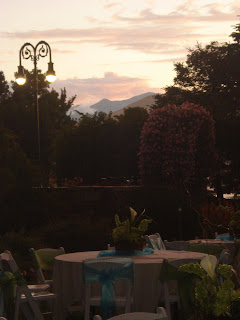 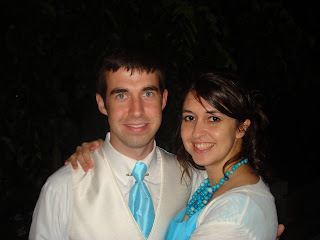 Before flying out the next day I had brunch with Caroline and Jenn, old roommate and friend from DC. Always good to see familiar faces in Utah, otherwise I don’t think I could handle it.

I dreaded getting back on a US Airwasy flight, but when your aunt upgrades you to first class, maybe that helps a little? No issues this time, thank goodness. I paid my airline dues for awhile 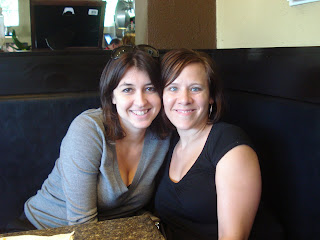 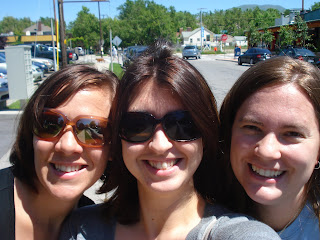 US Airways is the WORST.

Best part of this post: "I touched a car seat!"

I sincerely congratulate you.