Writing to you from my new home in Los Angeles - I still can't believe I'm a California resident. Well, not officially yet in the car registration and tax sense of things, but we'll get there.  So far, yeah, it's pretty amazing.

My last week in Phoenix was quite a good and memorable one for me, however.  I think I left in the best way and got to see most of the most important people that I've enjoyed during my AZ stay.  I'm over the days of throwing a party and inviting everyone I know to come over and bid me adieu.  Instead, a small series of events is the way to go.

My parents, brothers and sister-in-law flew in the weekend before I moved for my cousin's wedding to this super cute girl.  We started the celebrations with family reunion at a Macayo's somewhere - table for 17? 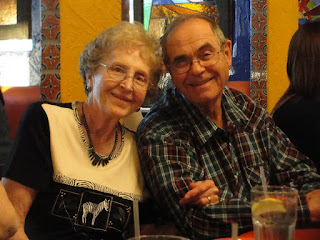 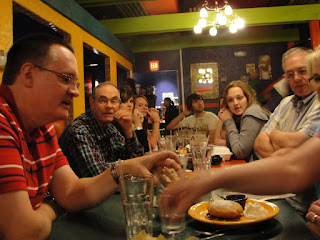 After stuffing ourselves with Mexican food, we crammed all of us into a hotel room to celebrate my aunt's birthday.  Grandma made a delicious cake, we had some ice cream and laughs, and then Grandma went into photo mode. 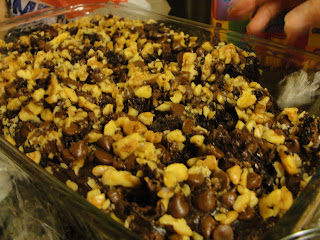 We seriously need to get her a new camera.  This one's probably a decade old. 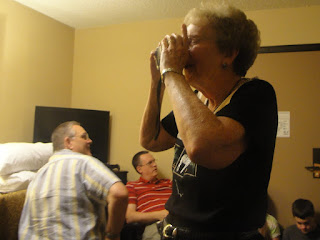 Saturday was the big day for Clint and Alexis, while the siblings and I waited in the hot sun outside the temple.  Tanner clearly didn't get the sunglasses memo, as his eyes are closed in half of the day's pics. 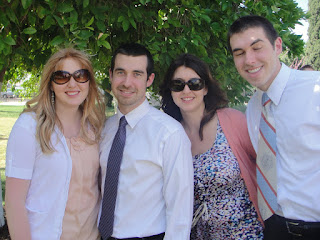 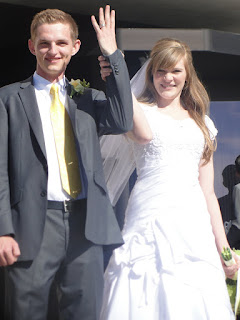 It's always funny to watch my parents around their siblings.  I think my dad gets funnier.  All the laughter makes me miss being around my family. 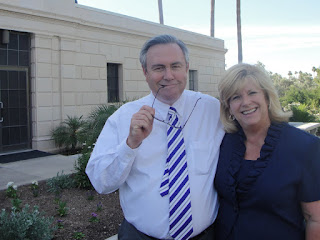 By the look on Tanner's face, my dad either just did something hilarious or is about to. 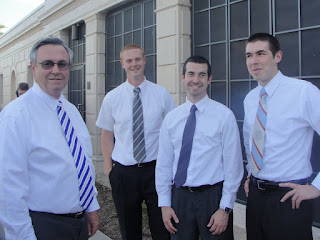 The reception had delicious Mexican food (I can never get enough) and a candy bar that I had helped set up earlier in the day.  Katie made an appearance at the reception and also probably in some of my family photos. 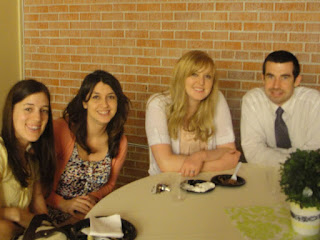 There goes my dad again, cracking up with his siblings and parents.  I often wish I could go back in time and watch them growing up.  I don't know how my grandma kept my dad and uncle in line.

Towards the end of the night, the grandparents had had enough of the loud booty-shakin tunes and wanted to get outta there. 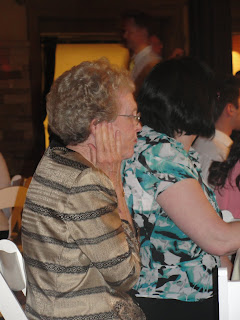 I spent the rest of the weekend hanging with the family, ignoring all the packing that needed to be done at my house.  Priorities!  I also paid a visit to see my new cousin, and amazingly I even held him.  If you know me and babies, that is kind of a big deal.

On Tuesday was a stop at my dining farewell tour of Phoenix - The Windsor.  That town has some seriously good food, some of the best in the country.  I am slightly concerned about finding my Postino substitution out here.  Anyway - the food!  A southern slant, and everything sounded good.  I opted for the chopped salad with fried okra on top, Meghan got the brown bag chicken sandwich and we shared.  Shannon had the mixed grain salad, which also looked delish.  I am still dreaming about that chicken sandwich.  Amazing! 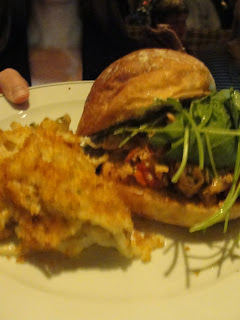 Dried tomatoes, toasted hazelnuts, avocado, goat cheese, herbs...the flavors were amazing.  Side dish of church potatoes.  Oh, wow.  I think I may try to recreate the potatoes this weekend  I had really hoped to eat at the Windsor a second time before I left Phoenix, and be assured that it's on my calendar when I'm back at the end of June.

The next night was my final trivia night - sniff!  I've really enjoyed going regularly, and thanks goes to this one for setting it up.  I've already looked for a good place to go here in LA and MCB reminded me the other day that both of us were on the academic bowl team together for a year in high school.  I guess I really am a trivia nerd.  We tried out a new venue, since we were sick of the food at another place, and while I found it a little loud since we were competing with TV, we still managed 2nd place. 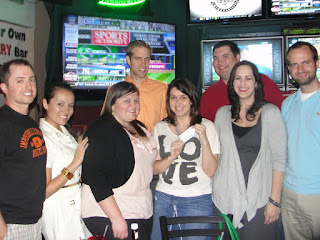 Finally, moving time came.  My aunt, cousin and mom came over to help me pack and clean on Thursday night.  By late Friday afternoon, my place had gone from this: 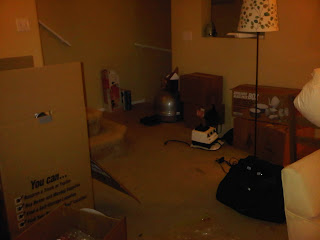 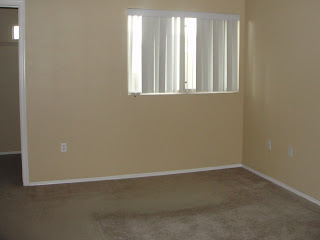 Three long years in that apartment, four years in Phoenix.  It's kinda of strange to think about.  I had some good times and met wonderful people that I will miss.  Phoenix and I didn't get along well for a good part of the time, though it was good to me and for me, I think.

MCB flew into PHX on Friday evening and with the help of a few friends and my mom, we loaded up the truck and said adios to La Terraza.  We stayed the night in Mesa with my grandparents, and on Saturday morning, mom was off to the airport and MCB and I took off on our drive - me in the truck, him in my car.

The trip started out very well.  Little traffic, and the truck, despite being fully loaded in a tetris-like way (otherwise it would not have fit) was able to hit 70mph.  We stopped in Blythe for refreshment then kept going, straight into a crazy wind storm in the Coachella valley.  Eeek!  I really felt like the truck wasn't going to stay on the road, even though I dropped speed to about 45mph.  Semis put on their hazards and were going really slowly too.  I had to pull over into a gas station for a mental break and to psyche myself up again.  Not fun.  I had also planned to skip the shortcut by taking the 60, since it has a curvy mountain pass, but MCB told me to face my fear and do it, so I did.  6+ hours later, we pulled off I-10 onto Overland and watched the steeple of the temple guide me home.  Yay!

My new roommate (who I'd never met in person yet) was at work and left a key for me in the lockbox.  MCB and I unloaded all the small stuff then found a bacon avocado burger for dinner.

I managed to back the truck down our skinny driveway, leaving an inch to spare along the top.   I'd better get good at backing in; it's the only way to park at our apt complex. 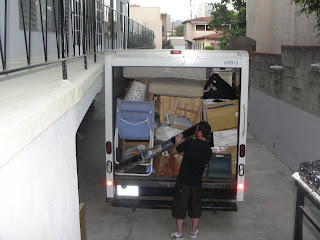 The gas stove wasn't turned on for a few days, and heaven forbid I try to turn it on myself and blow something up.  We've been eating a lot of take out. 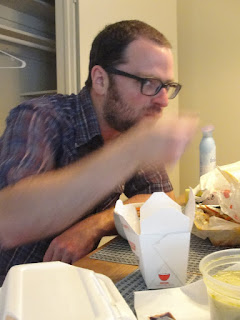 And I'm still living in the midst of boxes, even though I made friends with the cable guy and he took some off my hands for his own move. 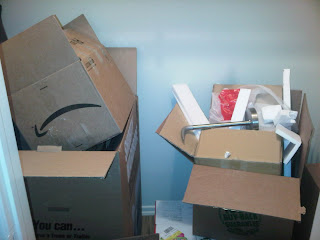 Oh, and here's the desk I put together completely backwards and upside down.  I'll fix it soon, I hope. 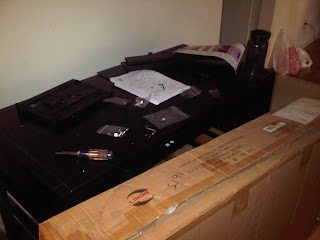 Met my new roommate, she's lovely, went to church, kinda strange, and am still living out of suitcases, but this is the life!  You can visit me anytime you'd like.  I'll try to get my things put away before then. 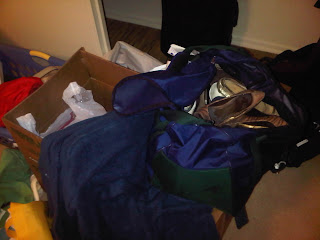 hahaha grandma's photo mode! too funny. i regret that i didn't make any appearances at farewell shenanigans (e.g. trivia, etc) but i am happy i showed up in the family photos. would definitely like to roadtrip to LA sometime to visit! will bring arizona goods to you. details TBD.

I will get caught up on this blog! I am almost caught up and current! I did start solid blogging in March of this year, so I'll do a lit...