Intro to Albania, Plus a Transportation Overview

Our shuttle from Montenegro to Tirana really saved us a lot of hassle. We took off in the morning with a handful of other hostel residents and headed down the road.

Quick pit stop in Bar, Montenegro. Our driver disappeared for a bit, and we wandered around. 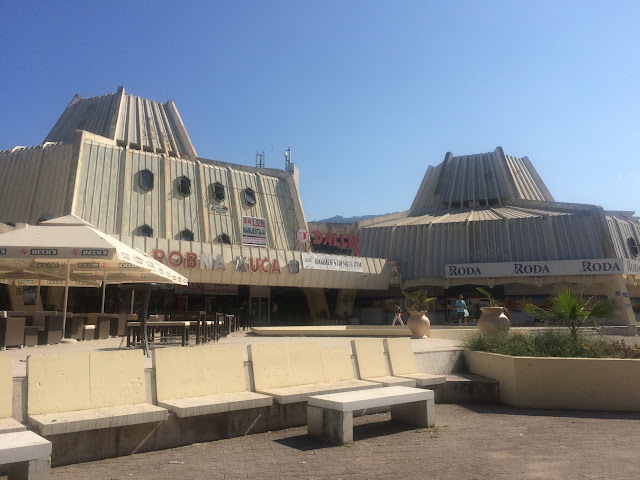 Back in the car, we survived a hair-raising trip. Our driver was quite aggressive, the roads are narrow, the mountains winding, and as soon as we crossed the border into Albania, there was a car accident that had just happened. Looked like everyone was okay, but a car was flipped over and it wasn't the best welcome.

Meghan and I gone back and forth on the decision to rent a car for Albania, and eventually booked one (the day before arriving!) since we wanted the flexibility, and as soon as we got into Tirana's outskirts, we were majorly second-guessing that decision. Traffic was insane. No rules. Chaos. Cars, people, tractors, animals everywhere. It was not a good feeling.

Still, we pressed on. Our driver dropped us off at a central place in Tirana, and we grabbed some money, food, and found our rental car place. 12,000 lek. Seems like a lot of money. 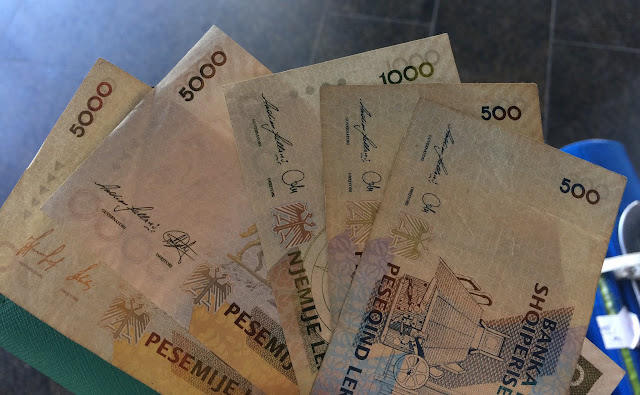 The people at the car rental place were beyond kind and friendly. I went outside with one of the guys to review the rental car and take photos of it before we took it. Rental cars in the US are shiny, new ones; rental cars in Albania are older, beat up ones. It's for the best. He gave me a few tips for the road, and took it as a compliment when I said Albanian drivers are a little bit crazy.... I was nervous, but we piled in and took off. The rental office in the city didn't have a GPS on hand, so we had to drive out to the airport to get one.

Finally we made it out of the city and drove a couple hours down to Vlore, where we stayed with Meghan's friend's parents. Getting into that town was a bit nuts, and we didn't exactly have an address. She was texting her friend back in the states, and he just kept saying, we don't really have addresses in Albania, just drive down the main road and look for this grocery store - my parents live above it. We did find the place and parked, and his dad came out to find us. He even ran back outside with me later to move the car to a better spot. I pulled so many illegal maneuvers to get it to a spot, but more on Albanian driving later.

We got settled into their place and our hosts don't speak English. Lots of gesturing! But they were so kind. Eventually their 17-year-old granddaughter came over, and she speaks excellent English. 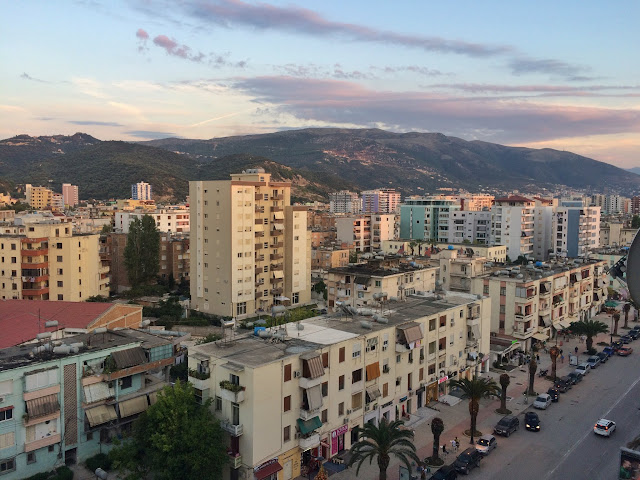 We took off on a walk around the city with our new teenage friends so we could catch the Albanian soccer match that was on that night. We settled at a bar outside that had a large screen, and that was our night. 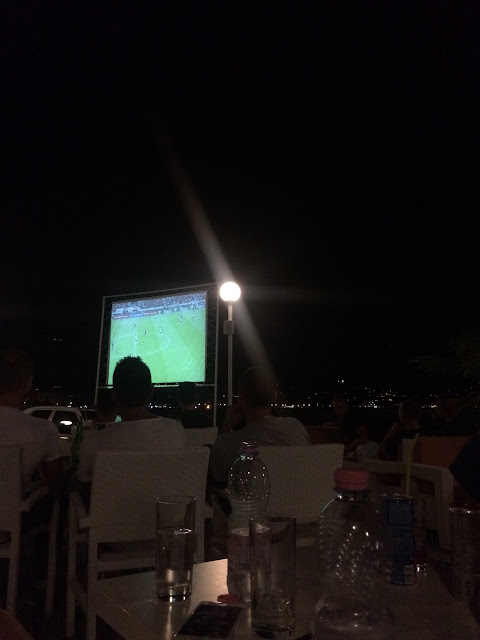 Alright, now here are my transportation recommendations for the region.

Most of my European trips involve cheap flights (EasyJet, RyanAir) or trains, but these modes of transport aren't strong suits in the Balkans and the countries are so small that they don't have interior flights (with the exception of Croatia).

Here's what I learned while researching before my trip and what I gathered while there:

Slovenia/Croatia - Great train connections to other major European cities  and usually within the country. Not as much train flexibility up and down the coast of Croatia.

It's very easy to drive on highways/toll roads, and they major roads are very good. For Slovenia, you need to make sure your rental car has a pass that allows you to drive on the highways, otherwise you need to purchase one. I didn't explore bus options, but I'm thinking they're good. I saw plenty of bus tours from Croatia for short excursions into Bosnia or up to Plitvice.

Bosnia and Herzegovina - Most of the railways were damaged during the war, so it's hard to get around on rail. It's coming back up, but slowly. There are train links to Croatia and Hungary, but that's about it for the region. Bus connections are good if you want to go that route.

There are new highways under construction, but latest figures I saw report fewer than 100km of four lane roads in the whole country. Most are small 2-land roads. Also, land mines are still very prevalent, so when stopping by car, do not leave the paved area.

We needed additional permission from our rental car company to drive into Bosnia. They gave us extra paperwork with a green insurance card to show at the border. I don't think we were asked for it, but sometimes they do check. GPS coverage here is not good, so I'd almost recommend a paper map and having someone help you map your routes. We relied on a faulty GPS, Google maps (which told us to turn on a road that didn't exist) and still ended up well out of our way. Go with the flow and you'll be okay.

Montenegro - Small country, and flights that go into the capital don't have a bus service to the coast, which is where most people want to be. It's easy to get from Dubrovnik into Montenegro, however, and we took a bus. Plentiful bus service around and to other countries.

Train links are few, with most service to Belgrade only.

There are no major highways in the country, and while our rental car company would let us drive here with extra clearance (like Bosnia), we weren't able to drop off our car here at the end.

Albania - This article was really helpful as I got ready for my trip. Albania has been very cut off from the rest of the world, so there are no train links to other countries. I don't think the train station in the capital of Tirana is even functioning anymore. A few trains operate within the country, but they are very slow and very old.

We were looking at bus options to get from Montenegro to Tirana, and it was going to involve multiple transfers, since there are not direct bus links into Tirana. There is a bus from Ulcinj in Montenegro into Shkoder in Albania, and apparently a mini bus, if you can find the driver in a cafe.

Within Albania, most people take minibuses (furgons) to get around, though they don't really have a set schedule, and I get the feeling that you need to be a bit of a local to know how to find one, how to figure out where it's going, and how to tell the driver where you want to go. We saw many people standing on the sides of highways catching these buses. Also, jumping over guardrails into other traffic to get to a bus. Not my idea of fun.

We went with the car rental option, but we had to pick one up separately within Albania. I couldn't find any rental companies that would let us drive a car into Albania. When we got our car, they asked us which regions we'd be visiting, as some roads are very poor and require a four-wheel drive. Thankfully we didn't need that.

Car Rental - Based on all the information above (few flights, slow/old or no trains, flexibility factor) we went with the car rental, and it was definitely a great call.

I had to search a bit for a car rental company that would let us drive the car into multiple countries and let us do a one-way rental. We used Sixt for the first part of our journey, and it was an easy experience. They had everything ready for us, including additional insurance information since we'd be going into Bosnia. Very nice car, we had an Opel Astra. More premium cars can't be driven into certain countries.

For the Albanian portion, we decided on a car last minute, and we used AutoEurope. You book a car and they send you a voucher, which you redeem at a local car rental office. Ours happened to be at Enterprise. We had an older Skoda, which was small and few amenities and quite a few dents and dings, (our cigarette lighter didn't work, which rendered the GPS charge useless), but it's better to not be driving a shiny, new car in Albania. Driving there is a mix of courage, fear, and faith that other people will move out of the way. I ended up parking on sidewalks, dodging livestock, and doing a a few illegal moves, one in front of a police officer. You do what you gotta do, and so does everyone else.

We rented a GPS for our trip, which served us well, mostly. Not great coverage in Bosnia, so be prepared, but everywhere else worked well. We had our Google maps location dot visible on our phones, so we could tell where we were, we just didn't want to use our roaming network to actually map things out (nor was that reliable all the time).