After settling into Vlore, we got a good night's sleep at the Rrokaj home, acting out our conversations since we don't speak each other's languages. We managed to tell them that we were going to drive south and go to the beaches, and they acted out a steep and curvy road. Um....yeah. Don't make us more nervous.

We planned to just drive all day and stop at beaches along the way, until we ended up in Sarande, which was about 4 hours south. Off we go! Time to drive like an Albanian.

Our GPS wouldn't charge in the car at this point, and while we found a camera cord to charge up before we left, we didn't rely on it. But who cares when you're driving next to this? 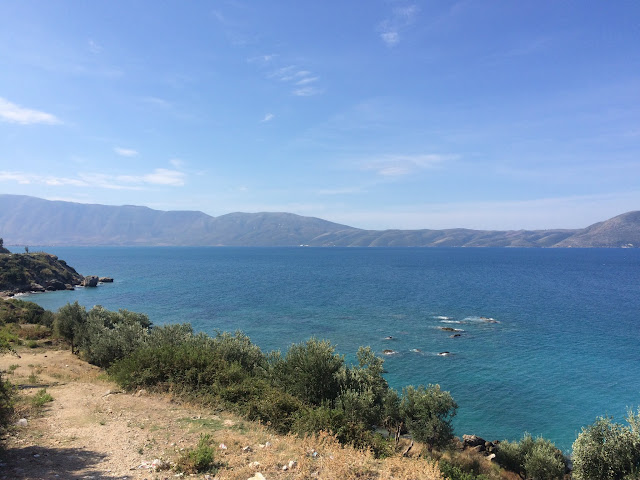 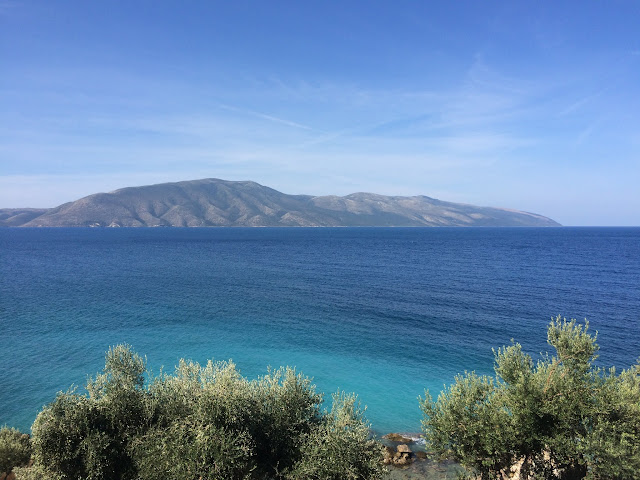 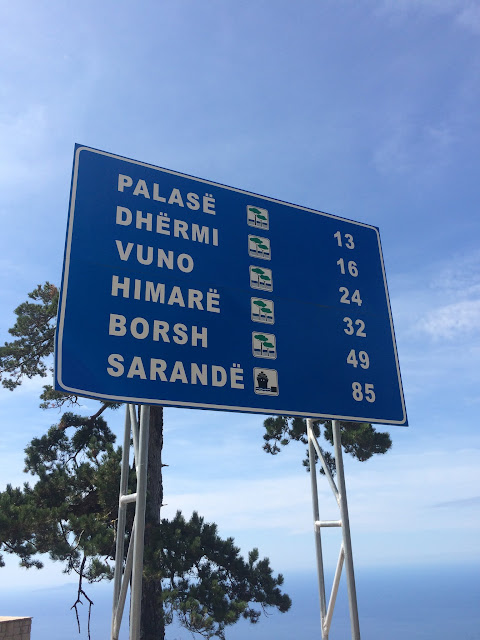 When Enver Hoxha ruled Albania, he isolated the country and prepared to defend it, and as part of that philosophy, he had bunkers built all over the country. I really wish we'd been able to see more of them up close, but there are no places to pull over on the side of the road. I'm sure an Albanian would've just stopped on a curvy, mountain road and had other people deal with it, but I wasn't quite that brave. 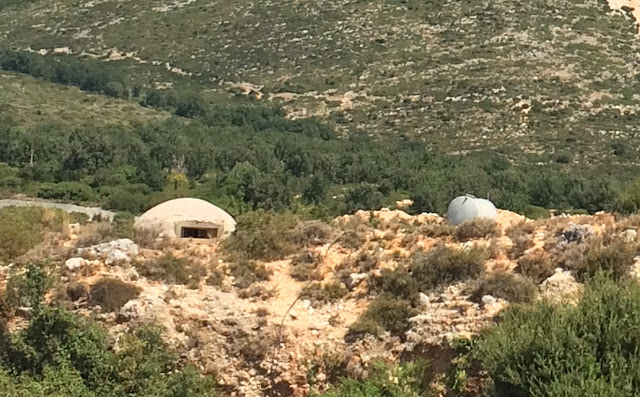 We came over a mountain pass and saw some beautiful water down below, so there we stopped. We found these little structures and some chairs, and maybe 4 other people around the entire expanse?

We gladly laid out our towels and got down to relaxation. When we left, there was a guy in a snack hut that had us pay a couple dollars since we used the chairs, but a very small price to pay. 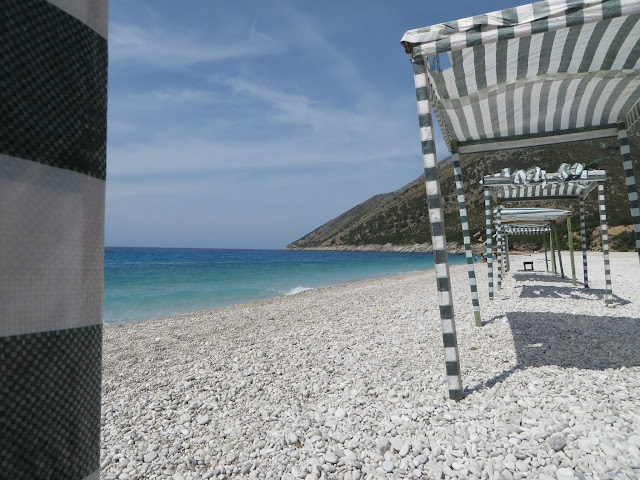 If you're looking at a map, this is probably just above Palase - you'll see the crazy curvy road, and we popped down to the water after getting down the mountain. 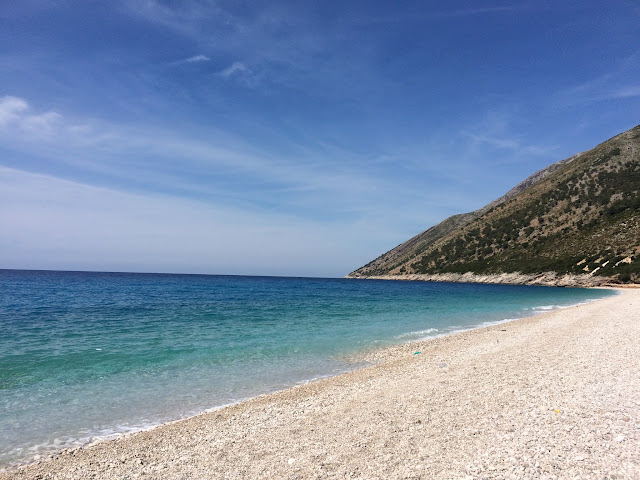 Back in the car after a bit, and on to Dhermi, which was probably my favorite stop of the day. A bit more action here, with some jet skis and boats, and a few more people, but definitely still not crowded. 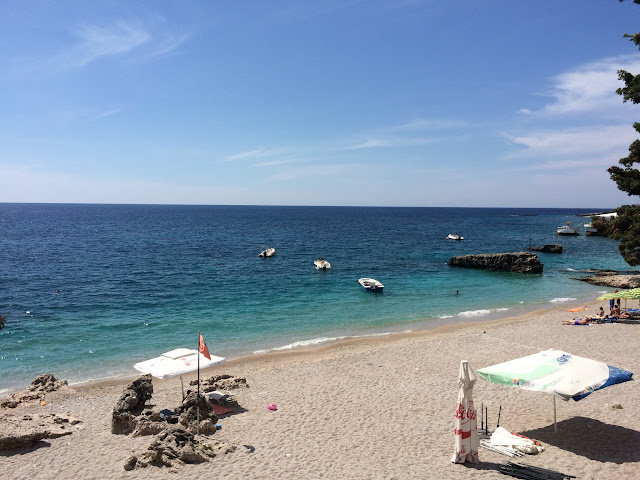 I mean, look at that water. 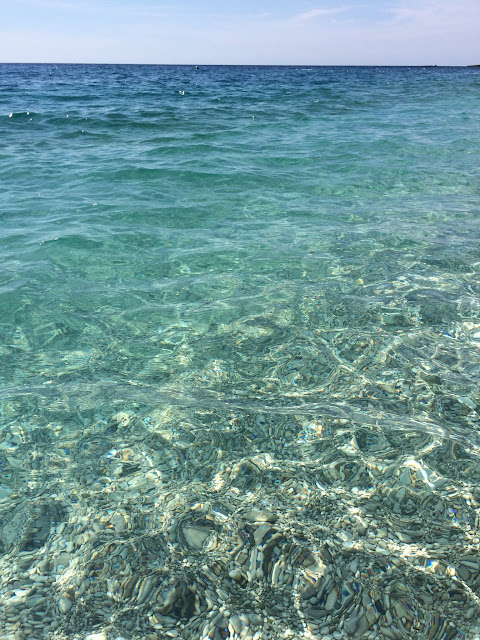 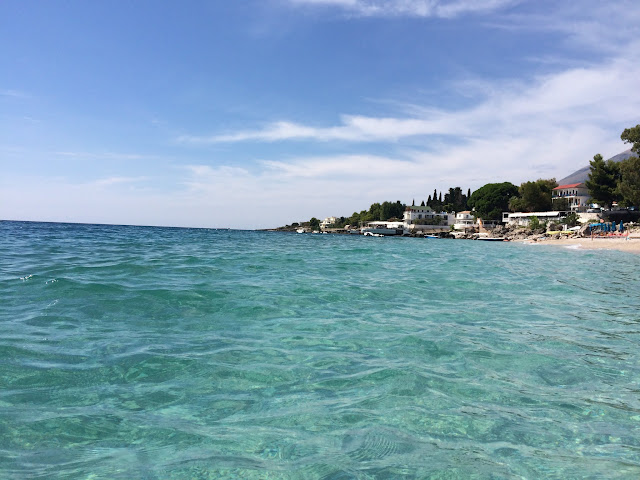 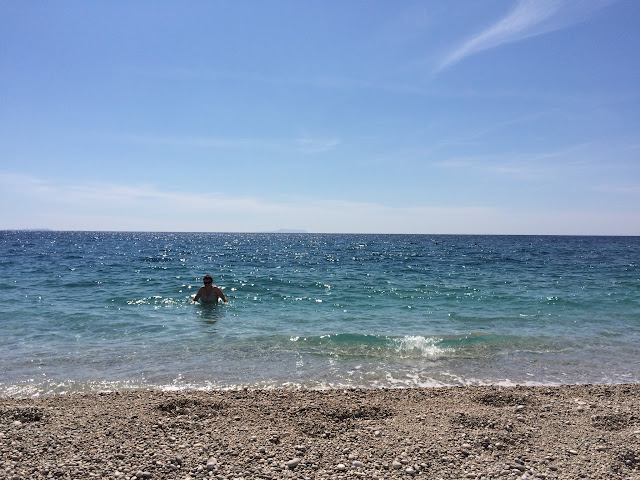 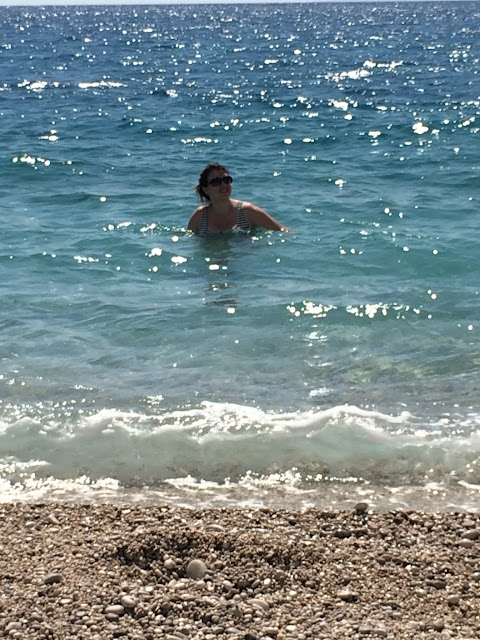 A bit more time in the car, as it was getting late in the day and I didn't want to be driving after dark. A common appearance on roads - livestock. 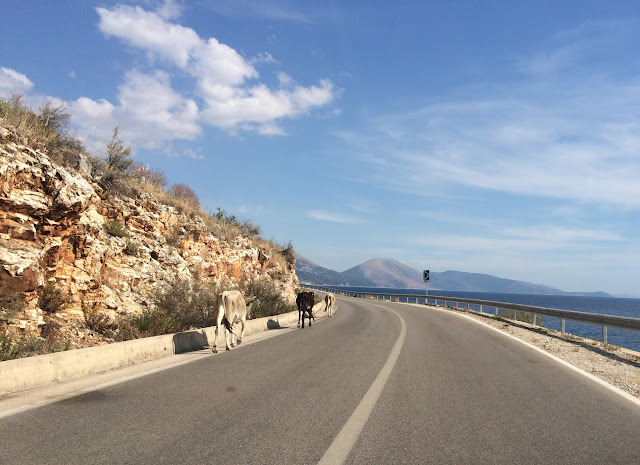 We made it into the city of Saranda where we'd stay the night, and we hunted for more beaches. Sadly, they're not great right in town, but we took what we could get. Once the sun went down, we were off to hunt for our rental house. 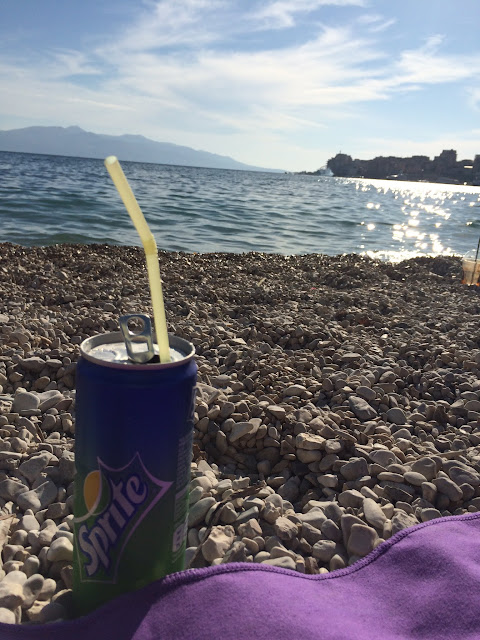 We got a bit lost, as it was further from the center than maps indicted (really, don't believe Google/GPS here), and we found these lovely furnishings in a huge house we had all to ourselves for about $25? 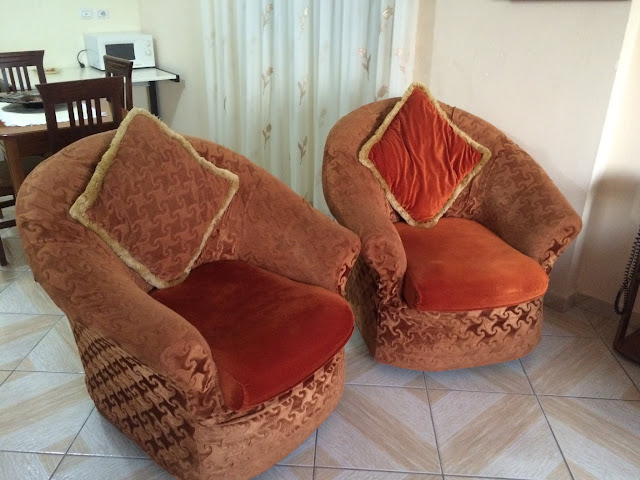 Our rental host left us the keys and a recommendation for a fish restaurant around the corner. We walked over and found a few other people dining, but it was very quiet. Pretty food food though! I ate so much cheese in Albania and loved it, especially baked like below. 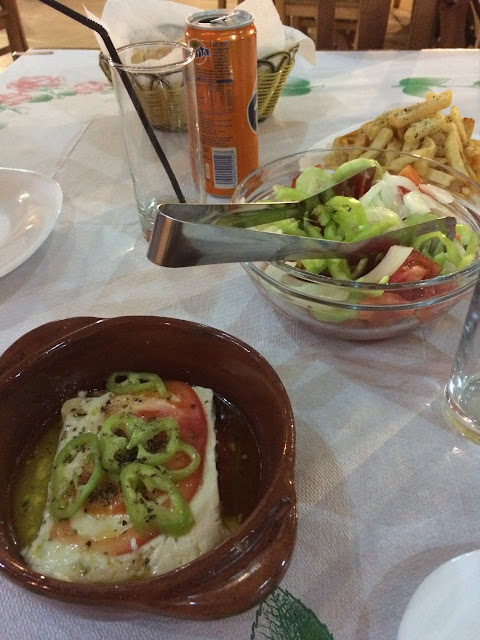 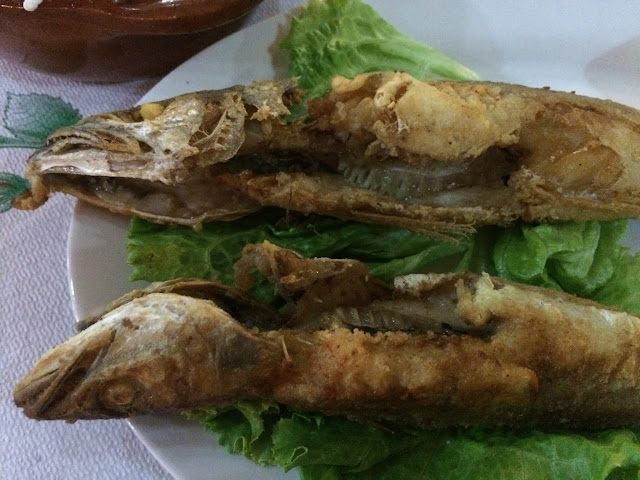 We called it a night and got cleaned up at the house, though they didn't leave us any towels. Good thing we brought our own foldup/super absorbent ones. Good call on purchasing that before the trip. At least this house had Internet too, since we hadn't been able to figure out how to ask our Albanian hosts in Vlore, and they weren't exactly tech savvy.

The next morning we got up and drove outside of Saranda to Ksamil, which has some lovely beaches that we'd read about. The sky was a bit overcast, but I was determined to have some beach time. With more time here, I think you can find even nicer beaches, off on Ksamil islands. Or if you search past dirty construction sites. This worked fine for us though. We stayed til noon and only had to share the cove with a couple other people. 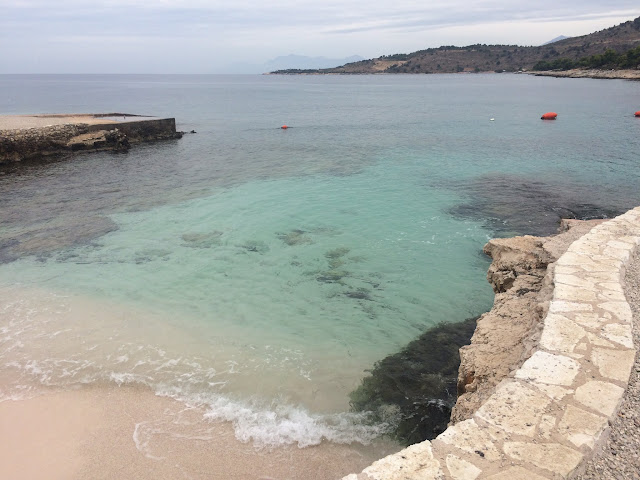 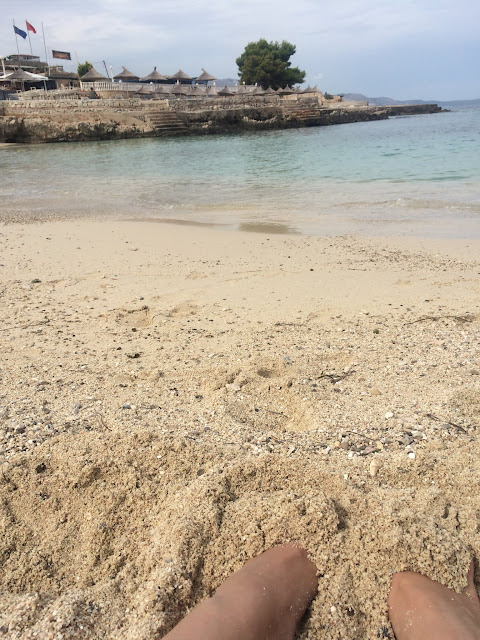 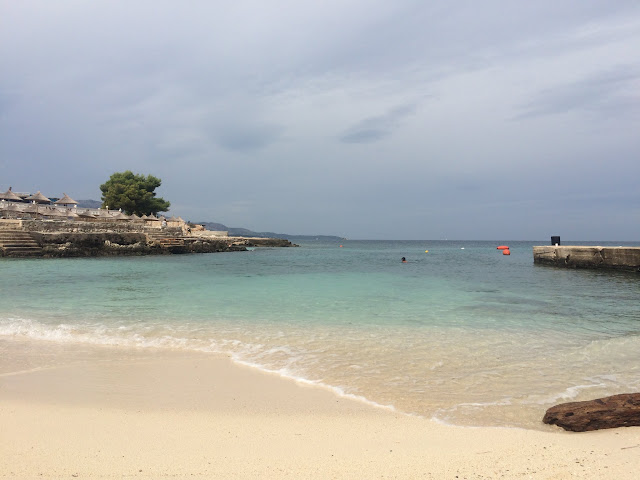 From here we went to Butrint, which will get its own post, and it was starting to rain. The next place we had to see was the famous Blue Eye - Syri i Kalter. We drove off the road down a dirt path, paid a small fee, and parked to explore. 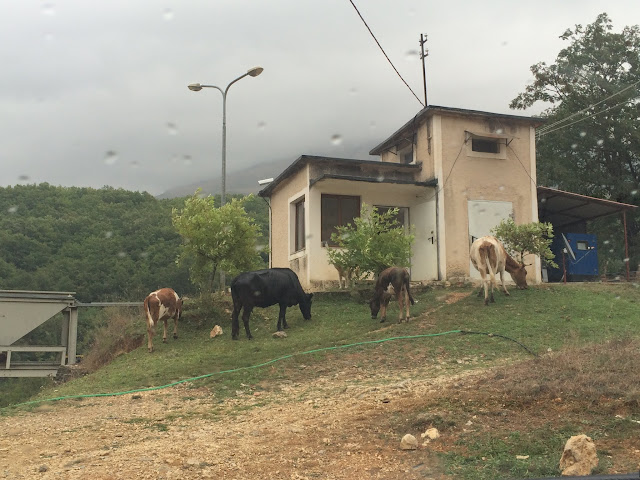 Since it was raining, we were basically the only people here! Us and the cows. 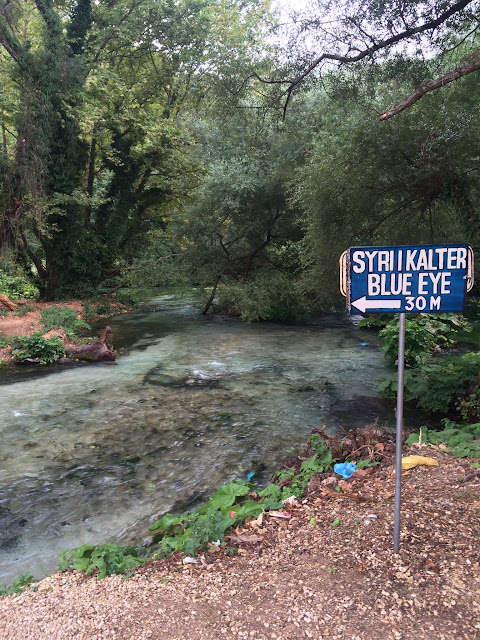 The Blue Eye is a natural phenomenon, and still no one has been able to determine how deep this spring goes. Back in the communist rule, this site was fenced off and only the communist elite could play here. 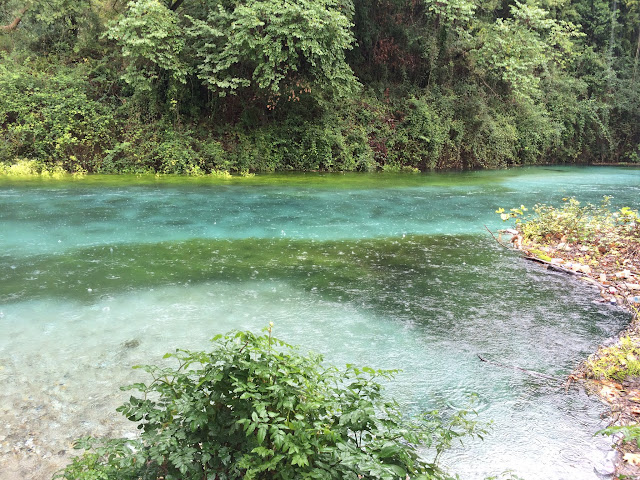 There's Meghan on the platform where you can see into the eye. 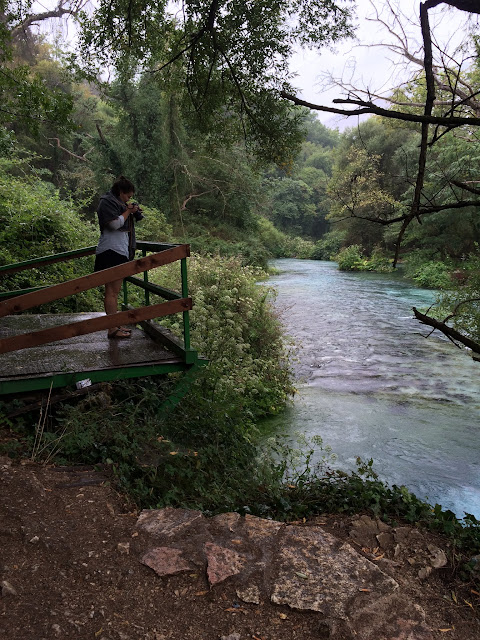 And there's the eye! 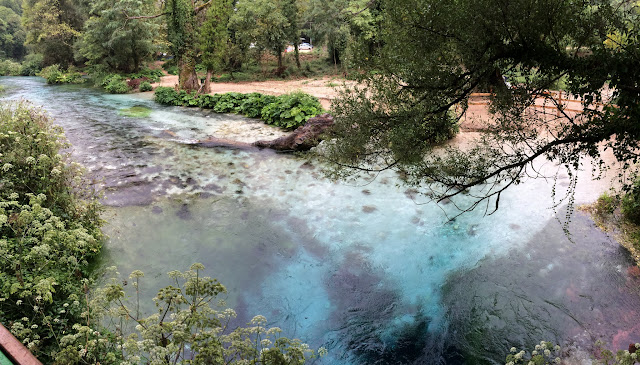 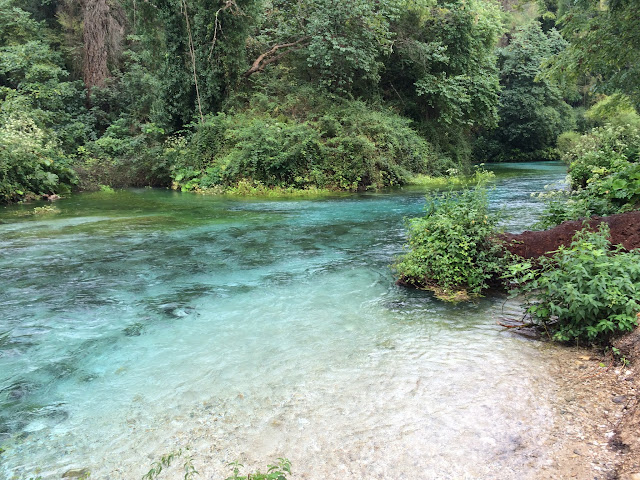 That covers it for water attractions in Albania. I highly, highly recommend the coast, and early September was the perfect time for avoiding any crowds.
- November 20, 2015