Coach to the Ella! 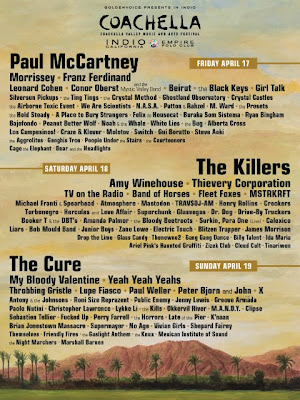 Ms. Liz and I decided a few weeks ago to go ahead and make a hotel reservation before the line up was announced, just in case it was incredible.  Last year's line up didn't really do it for me, so I skipped out.  In hindsight, I probably should've gone anyway, so I'll just have to make up for it this year!
It helps that I live within driving distance now, no more flying across the country, renting a car, etc.  There's really no excuse not to go.  Best $300 tickets around, considering that I'd probably pay at least $75 to see 1 of the headlining acts.
Line up was announced Friday - who I am most excited about? Let's go in poster order:
Friday:
Paul McCartney - he's a Beatle.  That's enough.
Morrissey - never been a huge fan, but he's a UK legend that I should probably see.
Franz Ferdinand - I think they played at Coachella 2005.  Totally fun.
Leonard Cohen - legend.
Conor Oberst - not a Bright Eyes fan, but he deserves a shot.
Beirut, Black Keys, the Ting Tings - all bands I've heard a bit from, definitely interested in their live stuff.
Crystal Castles and Girl Talk - dying to dance my a** off with these bands!  I'm so sad I've missed their tours over the last few months.
We Are Scientists - love the new album and their witty banter at live shows.  Can't get enough of them.
Felix de Housecat - also super good dance tunes.  The dance tent is by far the funnest at the event.
Saturday:
The Killers - always wanted to see them.  Always!  And now I can! With 40,000 people under the stars.
Amy Winehouse - let's hope she gets her act together.
Thievery Corp - DC legend.  Who I never saw.  It'll be rockin.
TV on the Radio, Band of Horses - both critically acclaimed albums over the last 2 years.  Should be good.
Fleet Foxes - I have loved, loved them this year.  Can't wait to see how they translate on stage.
Glasvegas - getting a lot of press.  I'm ready to hear them.
Junior Boys - I will be shakin it!
Sunday:
The Cure - no explanation needed.
Yeah Yeah Yeahs - I still love Maps.  I should brush up on them!
Lupe Fiasco - I'll bring my skateboard.
Peter Bjorn and John - if only to whistle along to Young Folks.
Jenny Lewis - I'd like to see her stuff outside of Rilo Kiley.
Public Enemy - gotta be entertaining
Lykke Li - one of my new favs!
Paolo Nutini and Okkervil River and the Kills - have a little bit of all their stuff, they're probably worth catching.
So that's 30 bands at least.  Even if I paid 10 bucks to see each of them during the year, you do the math.  And there's always a few hidden gems that I'll discover in my research, plus the last minute additions can also be awesome.  See you in the desert in April! 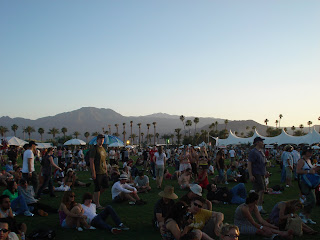 Yeah, I'm totally jealous. I was talking to Liz about the lineup, and almost in tears thinking about what I'll be missing out on if I DON'T go. My fingers are crossed for tickets for my birthday...