Cute little Flores on a Saturday night.  Lovely little town on an island in a lake.  I was glad to make it after a 5 hour bumpy van ride.  Tim and I were winging it on this trip, so we planned to walk around town to find a place to stay.  We met another guy, Chris the Canadian, on our van from Belize City, traveling alone, who had the same plan.   The three of us decided to band together in our quest; little did I know I'd be cursing Canadians by Monday.  (No offense to any of my Canadian friends). 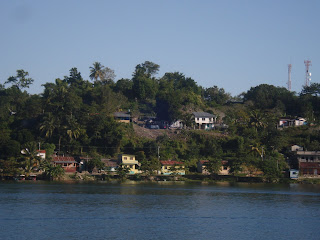 Our best bet, so said the guidebook, was Los Amigos hostel. Cool atmosphere and cheap! Except they had no rooms. We were offered a hammock or a mattress pulled onto a little area with hard benches. Um...no thanks. Even for 6 bucks. We went elsewhere and managed to find a room for 3 people, complete with a TV and a bathroom that had a door with a huge clear window. So much for privacy. 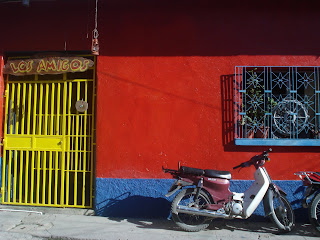 Los Amigos did have a great restaurant that's vegetarian-friendly, so we headed back there for dinner after finding our room and hitting an ATM to get some quetzales.  Except Chris the Canadian had a debit card that didn't work in this ATM.  No prob, said Tim and I!  You can put the hotel on your credit card and we'll give you cash for it until you can find another ATM or bank.  Deal.  We had a yummy dinner at Los Amigos, made amigos with the British guy who runs the place, and even made reservations for a van to pick us up in the morning to take us to Tikal. 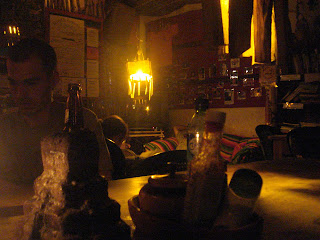 Apparently the thing to do for Tikal is to get up at 4am, grab a bus for the hour-long ride out, race to the back of the park and scale the big temple just in time for sunrise.  Um....no thanks.  I'm fine seeing the whole thing in broad daylight.   Our van picked us up on the cobblestone streets on Sunday morning and we were off to explore the greatness of the Mayans! 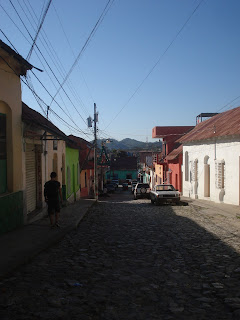 Tikal is quite amazing.  I went knowing it's just one of those things that you do when you're in Guatemala.  But I'm more than glad that I did.  I don't know that I needed to spend another day there, but one day was sufficent, impressive, and well worth it. 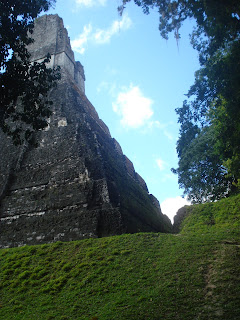 Of course Chris the Canadian didn't have enough cash to pay the admission fee (which is more expensive for foreigners than natives.  Is that fair? We don't do that in the US - can you imagine the Smithsonian charing a fee for foreigners?), so Tim and I floated him cash since there were no ATMs around and no banks open until the next day.  And Chris the Canadian is also a hungry Canadian.  He ate many of our snacks throughout the day, since Tim and I came prepared with water and granola bars and fruit and he did not. 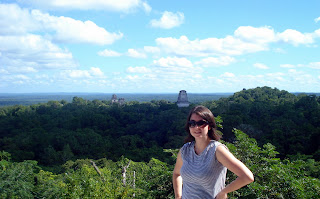 Tikal is a lot bigger than expected.  Our guidebook recommended NOT going on the trail out to one of the temples, as it's remote and been prone to robberies and rapes.  Yikes!  It takes about 45 minutes to hike back to Templo IV, the big one.  I was a little tired at the point, but you gotta hike all the way to the top!  The view was awesome, and not too many people were up there.  I could've sat there for a couple hours, just taking in the view above the trees. 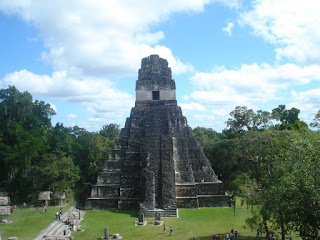 We grabbed a bus back to Flores in the mid-afternoon and searched for a snack, since Chris the Canadian was hungry again.  We found a local place with amazing limeade (I swear that's all I drank the whole trip - less than 2 bucks for a HUGE glass of fresh limemade mixed with soda water - best drink ever) and chowed down.  Chris had decided he was going to find his own hotel that night in the next town over; I think Tim and I were slightly relieved at not having to be his ATM any longer.  However, during the middle of our snack at this restaurant, Chris decided that was the exact moment he need to go find another place to stay.  He ran back to our hotel (we had left the key at the front desk) to grab his stuff and start his search.  Tim and I were slighly bewildered and knew that, once again, we'd have to front the cash and pay for his snack.  Little did Chris remember that Tim was holding his camera in his backpack.
Tim and I finished up our meal, paid, went back to the hotel and saw Chris leaving.  Thankfully he remembered that he owed us money and offered to meet up with us later for dinner at a place that took credit cards, so he could pay us back.  Which worked out for the most part, except he still probably owes us 20 bucks.  Not a bright kid.  And he spouted off stories about traveling along through SE Asia and a few other places.  I was kind of amazed he'd made it that far in life.
Anyway.  Who am I to judge Canadians?
Tim and I found a travel agency that evening, booked a bus to Guatemala City the next morning so we could hit Antigua and all was well.  EXCEPT the next morning when packing I started searching for my trail mix and Cheez-itz and realized that Chris the Hungry Canadian had taken them when he came back to the room without us!  You do NOT take Cheez-itz from me!  He had been so worried that he would starve since he didn't have access to cash until Monday morning, so I guess he felt entitled to taking my snacks!  I'm still pissed about it; don't get me going. 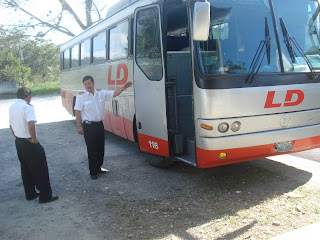 Monday morning Tim and I hopped on the Linea Dorada bus to Guatemala City, a 9 hour ride or something ridiculous that we could've taken in a car with JP had his friend not fallen in love with the girl in Belize, but eh.  At least we got some action movies and a pit stop in the middle of nowhere that had some tortillas, beans and cabbage to eat.
- February 25, 2009