So after a New Years Eve of traipsing all over New York, Tim and I head back to Williamsburg for a shower and quick nap until the cab called from outside at 4am.  Uuuugh.  Of course we didn't want to haul our heavy scarfs, mittens, coats, etc, on our Central American journey, so we braved the cold in minimal layers.
We made it to ugly Newark with too much time to spare and suffered as an overly enthusiastic high school group filled the outdated waiting area with way too much noise for 6am on New Years Day.  I felt sorry for the chaperons and silently prayed that I wouldn't ever have to do such a trip.  I downed a Red Bull to help, but it did no good.  I couldn't wait to get on the plane and shut my eyes.
After a switch in Dallas we finally made it to tropical Belize.  Belize City is basically a hole.  We were going to cut it short on making the last ferry out to the cayes, so we planned to stay the first night in Belize City, at the nicest hotel possible so we wouldn't be bored out of our minds when we couldn't go exploring at night for fear of getting mugged. 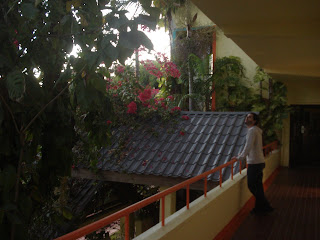 Friday morning we awoke and headed to Caye Caulker.  I'd previously spent a week in San Pedro on Ambergris Caye, but wanted to try something different this time.  Nothing in this trip was really planned, we just hoped to show up, find a room, and have things fall into place.  And for the most part, they did.  We got off the water taxi in Caye Caulker and were immediately greeted by the island character, dubbed Satan.  Yes, he calls himself this.  He rides a bike, works as a handyman for the Happy Lobster restaurant, pimps out rooms, and will get you weed, but asks you not to smoke on the beach out of respect, man. 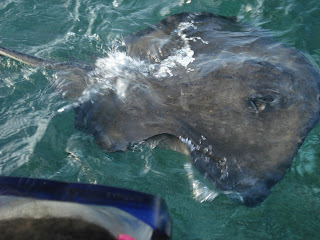 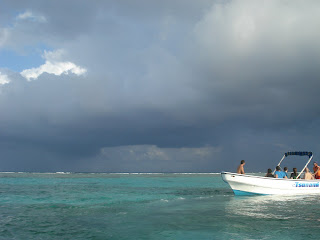 We ended up with a decent room near the Split on the island, and headed out for a snorkel trip that afternoon.  Saw some fish, saw a huge green eel, coral, but then it was time for the sting-rays.  Our guide threw some food into the water and out of nowhere, 30 rays came up and started going at it.  Jump in!  Um....are you kidding?  A French girl and I stayed in the boat for a bit while everyone else got in.  Our guide picked one up and I touched it, and when the 10-year old kid started making fun of me, I decided I had to do it.  So I jumped and swam and tried not to touch them.  And it was sorta cool and sorta scary.  I will probably never do it again! 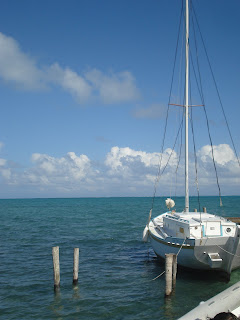 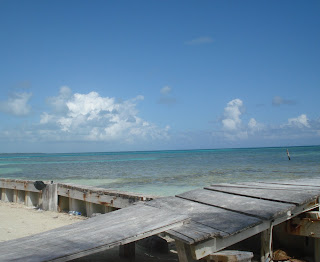 So one of our goals while on Caye Caulker was to find JP.  JP is a friend of a friend from Georgetown who happens to be living in Guatemala right now.  We swapped a few emails, he gave me some travel tips for Guat, and he ended up planning a New Years trip to Belize for the weekend.  He had driven from Guatemala with a couple friends and would probably have room in the car if Tim and I wanted to hitch a ride to Guatemala City.  Perfect!  JP and I kept trading emails, and figured we'd just run into each other on the island, as it's small and after 4 hours there you've seen everyone who's staying there.  I didn't have a cell phone, so relied on that to work, and of course, it did.  Tim and I spent Friday night hanging out with JP and friends and met some great people, including Dick and Linda from Sweden who were traveling for several months through Central and South America.  Kinda awesome. 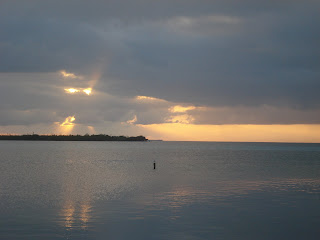 The plan was to leave Saturday morning to drive back to Guatemala, so Tim and I showed up at the meeting place around 10am, ready to get our groove on.  Shortly after, JP appeared with some bad news.  His friend with the car had fallen in love the night before and wanted to stay another day on the island with some girl.  And who are we to get in the way of the true love that happens when you're on vacation?  Could Tim and I wait another day to go?  Actually, no.  We were bored.  Belize is beautiful, but Caye Caulker is small, we'd already snorkeled, and there was much to get to in Guatemala.  JP helped us figure out some bus schedules, and we took off.  Water taxi back to Belize City, then colectivo van service to Flores, Guatemala, near Tikal. 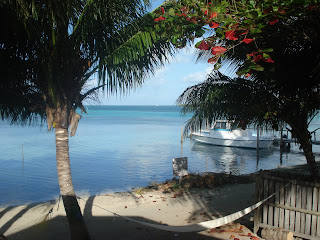 Twas a super close connection; we arrived back in Belize City just 10 minutes before our bus to Flores was supposed to leave (we were supposed to check in at the ice cream shop.  So official).   Everyone told us our bus had already left.  I started to panic, not wanting to waste another day, we asked multiple times, and about an hour later figured out that the bus driver had indeed NOT left, he was just parked several blocks away from the usual pick up area.  Whew.  We made it.  We hopped into a 20-passenger van and headed towards G, picking up a couple police officers along the way and dropping them at home.  We stopped at the border and walked through, basically walking through an industrial-size car wash.  Kinda funny.  Paid a ridiculous departure tax for Belize, a few bucks to enter Guatemala, passport stamped and we were on our way again.  We passed tin shacks, some with TVs tuned to futbol.  Very poor out in these areas.  We made it to Flores before dark, which was good, since some of the guidebooks recommended not traveling these poor roads at night for fear of huge potholes, cattle, and getting hijacked.  Not on my list of things to experience in life. 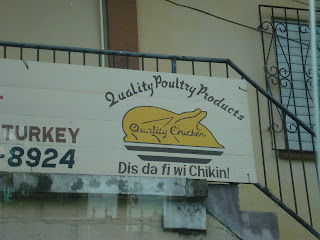 so unfair that, by the time you're managing to post about belize, you've already been to puerto rico and back, too.