In between writing about Turkey and laundry/unpacking, I've been livin' large in LA lately.

First up, Taylor and Courtney came to Disneyland for 3 days.  My brother's boss flies the whole company and their families down for a few days each December.  Nice boss, right?  I bought a pass and went to Anaheim to hang out for a few days.  I spent Friday morning working from their hotel room, and I was able to catch a photo of them as the went on the roller coaster outside the window.  It's a terrible pic, but it's them!  I went on rides later, don't worry. 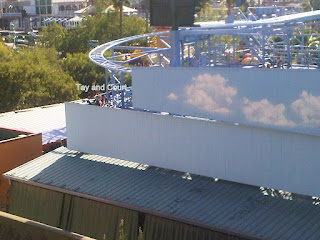 My intro to Disneyland started with them, and before I knew it, I went back twice the next week.  First, with  Erin, Todd and the munchkins.  The littlest munchkin decided to explode like a volcano while we were there, so we had to buy him new clothes.  He was a super cute little thing in his new striped Mickey outfit.  Too bad I have no photos.

I also returned to Disneyland on Friday night with every other Mormon in LA who also has an annual pass.  Well, maybe not every one, but eight's a good number.  Isn't the castle kinda Christmas magical? 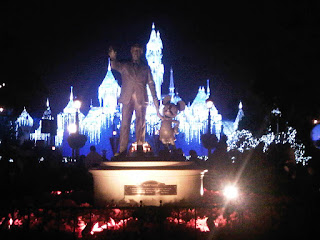 It was freezing outside, but I needed a Dole Whip.  I'll probably eat my way through Disneyland before getting through all the rides.  I need to try a Monte Cristo (who wants to split that?), a turkey leg, a sourdough bread bowl, cream cheese pretzel, a fried chicken dinner, and skewers from Bengal BBQ.  So far I've only hit the corn dogs and churros.  Fair food always has a place in my heart.  Though hopefully not in my gut. 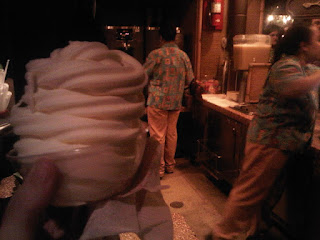 We waited in line for an hour to see Small World because it's Christmas.  Worth it?  No.  Totally hokey.   When are they gonna update that thing?  We got off the boat at midnight and I got home at 3am.  Worth it?  Sure! 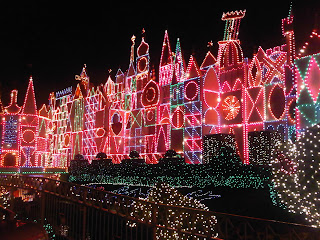 I was up early the next morning to get to Pasadena to meet Liz at the Huntington Library.  Other than Disneyland, this is probably her favorite place on earth.  I'd never been and I hadn't seen her in months, so double bonus!  I will definitely be back here soon. 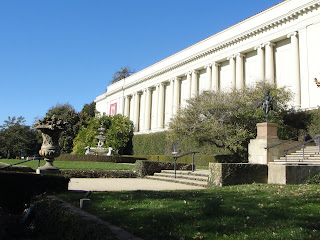 Doesn't that look like the scene from the Wedding Planner? 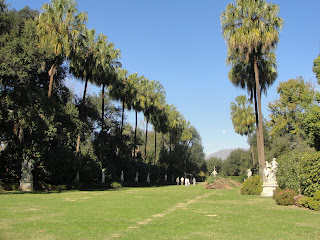 Keanu Reeves was also there. 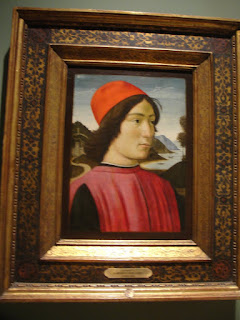 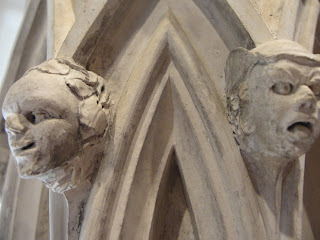 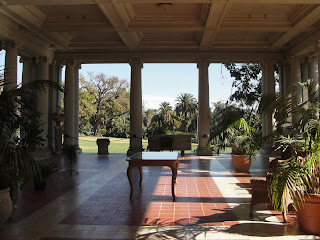 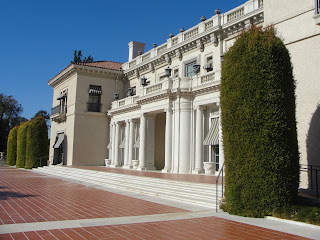 I had to stop and smell the roses. 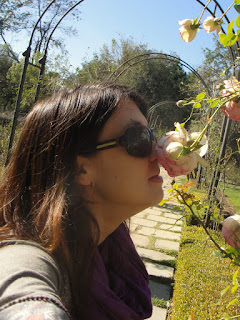 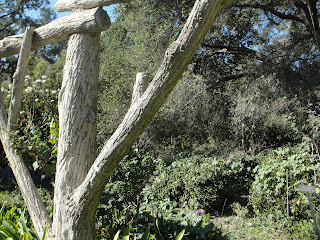 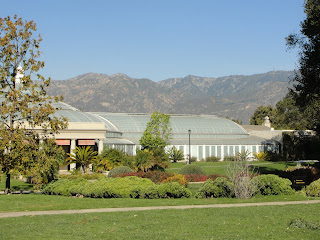 The grounds were beautiful, despite most of them being closed due to that crazy windstorm a couple weeks ago.  Pasadena got the worst of it. Lunch date at The Luggage Room, which I'd been dying to get to since I miss my beloved LGO down the street in Phoenix.  This place is in the same restaurant group, and I was relieved to see so many of my favorites on the menu.  Only downside - they don't let you do half and half pizza types at this place. 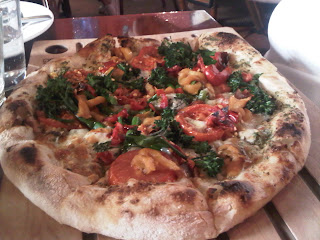 As much as I wanted to order The Padre (figs and prosciutto), I had to go with The Gladiator.  Karen, that was for you.  I thought about you with every bite.  Celisse, you get a shout out too. 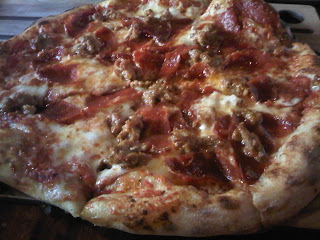 Liz and I parted ways and I raced back to the Westside to meet up with Kirsten so we could drive south to Long Beach to see the Calls.  All four of us knew each other in DC, but I probably hadn't seen Neal and Lindsay in 5+ years?  Cheers for reunions!  And east coast people! 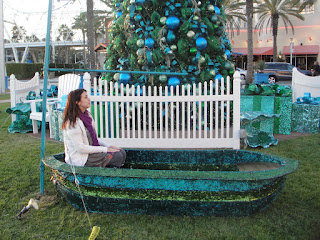 Kirsten and I played in a boat while we waited for them to arrive. 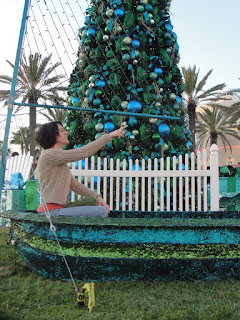 The Queen Mary!  Some lady died there last week? 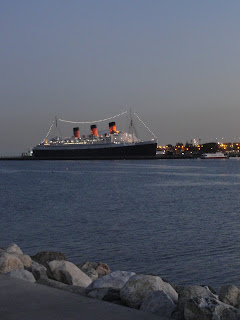 And an amazing full moon that I couldn't actually get a good pic of, cause I didn't have my tripod.  Curses. 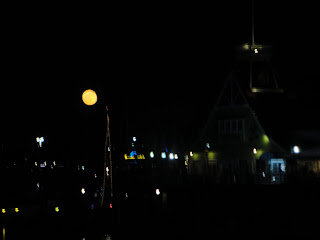 Ridiculously, I did not take any pictures of Lindsay, Neal or adorable Addison, despite the fact that we talked about how I was the only one with a camera and need to document the experience.  Guess we'll have to get together again soon, guys!  We had a lovely walk around the harbor area, topped off with some dinner, and I chugged multiple Dr Peppers.  Love that stuff.

On the way home, I knew that the Grilled Cheese Truck was in Long Beach that night, and the one thing that I had wanted to try was going off the menu in a few days.  I love how the universe lined up that night.

The line was about an hour, but hey, food makes me happy and Kirsten was a willing accomplice.  The thing I needed to try - a dessert melt. Vanilla Mascarpone with summer berries and Nilla wafers on apricot pistachio brioche. 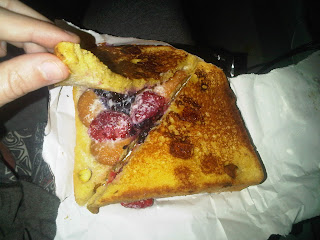 Kirsten got the S'mores melt (marshmallow creme, Nutella, graham crackers) and I think it might've edged out the other one for the win.  Glad I got to try 'em both.  The truck will be in my 'hood for lunch on Friday, and there's one more thing I absolutely must try.  Menu description: Gruyere with French Onion Soup onions and a Parmesan Crust. Comes with Soup Broth for dipping!  I can't resist the gruyere.... 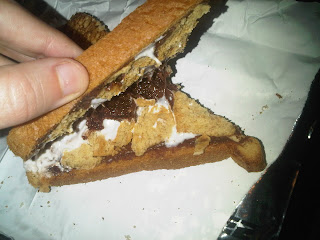 Earlier this week I had a delicious dinner in Chinatown at Yang Chow.  Slippery shrimp and string beans with pork and a side of steamed pork dumplings - uh maz hing. 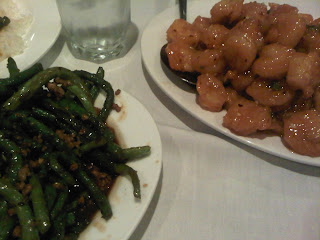 Then a little trip to the Arclight to see this little gem, The Artist.
I hope it's playing near you, cause you should see it.  #consideruggie

my mouth started watering at the mention of the gladiator. thanks for the shoutout!

So exciting to make it into your travelogue! It was fun to see you -- part of me wishes I could have made it to the grilled Cheese truck too, but Neal wouldn't have stood for an hour wait! Also, I made enough money to buy my Disneyland pass a week ago, so count me in for one of those trips in the New Year!!