Stuff I Did in June

Wow, I still have a lot of posts to write for this blog.  My European adventures (Italy, Southern France, Paris) were awesome, and you should at least see the photos even if you don't read what I write.  Those are coming up soon.

I did some stuff in June when I got back to LA after Europe, and I went to Phoenix for a few days, and I've done a ton of stuff in LA in July and right now I'm in New York.

Right after I got home from Europe, Samantha came to LA from DC for a wedding and we got to hang out.  She's a native NY girl and hasn't been to Cali, so I had to show her the sights.  We met because of our love of music and concerts and bands, so that was a focus of our activities.  That's why we went to see The Temper Trap at Jimmy Kimmel.  TV show taping +  band + Hollywood = good LA thing to do for visitors.

We went to the Grilled Cheese Truck too, since it was close to Hollywood, it's very delicious, and it's a very LA thing to do. 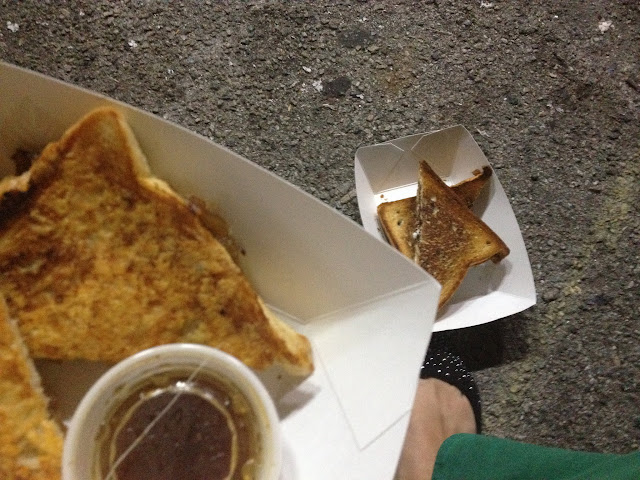 Oh, and then we went to this random party where a friend's friend's band was playing, at some building downtown with some fashion show and event going on.  We just stumbled in and hung out for awhile.  Also very LA. 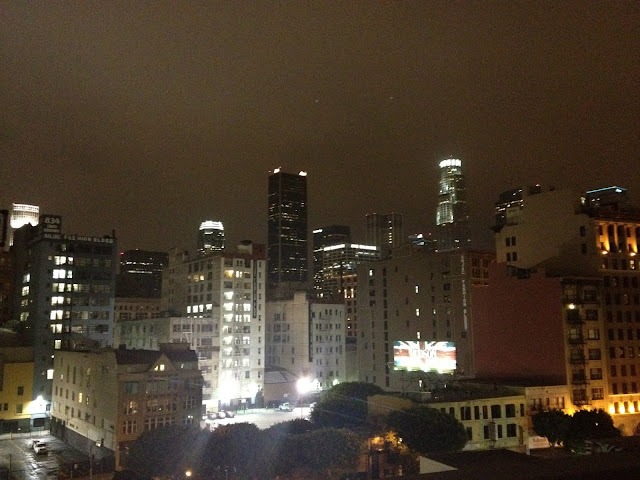 At some point in June I drank a Dr Pepper.  It's perfect if you put a bottle in the freezer for about an hour.  The slushy consistency is awesome. 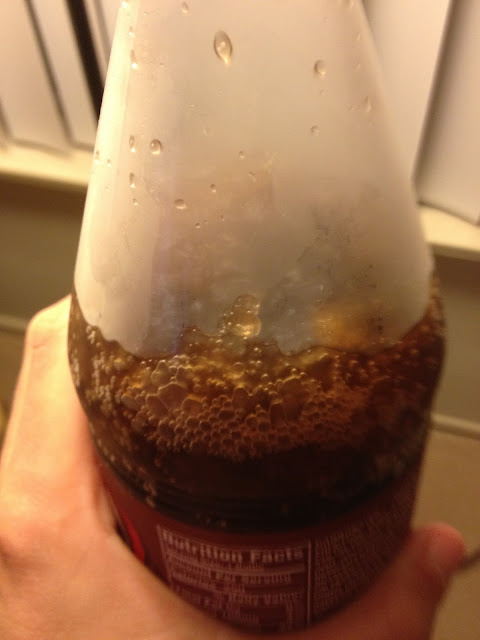 Josh and Carly came to town for a few days before their big move from Phoenix to LA. I hadn't seen Josh since he got married and I'd never met Carly, so I woke up really early on Saturday morning to have breakfast with them before their flight.  We went to The Serving Spoon and I'd give it two thumbs up.  Josh is from North Carolina and is a pretty good judge of grits.  He said they passed his test.  Next time you have an early flight from LAX, swing by here for breakfast. 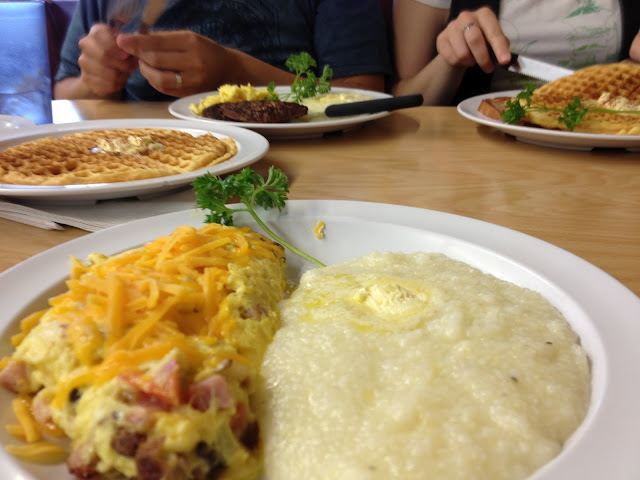 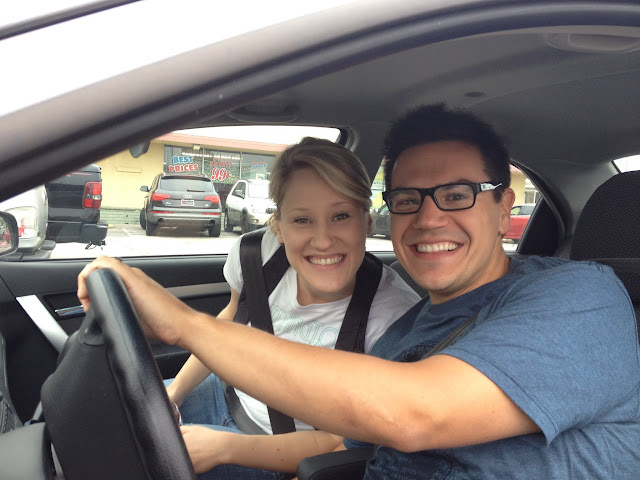 Later that same day I headed to Pasadena to meet up with some friends for Pasadena's Make Music Festival.  Free music all over a town that I adore - why wouldn't I go?  There were some chalk drawings too. 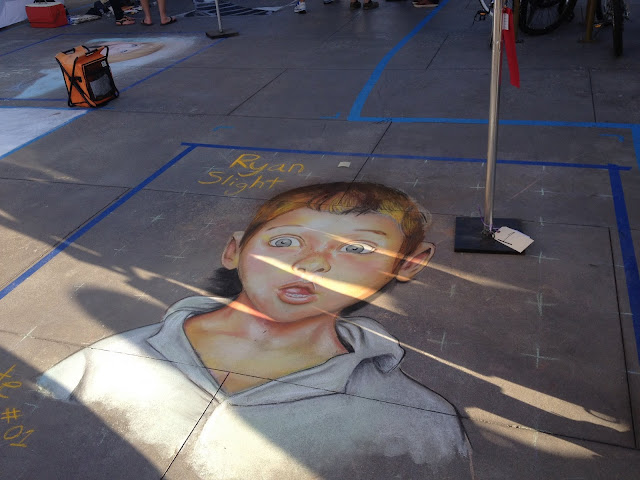 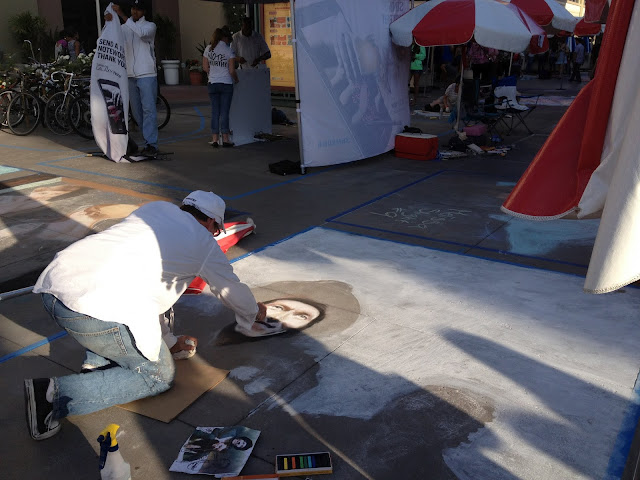 First I went to see Grimes, to see what all the fuss is about.  It was pretty terrible.  The sound was awful, her "band" was one dude standing in the back, sometimes touching a keyboard, and there was no connection with the crowd.  Hey - maybe you love her.  But she's not suited for festival performances.

Grouplove, on the other hand - great, fun, energetic show. 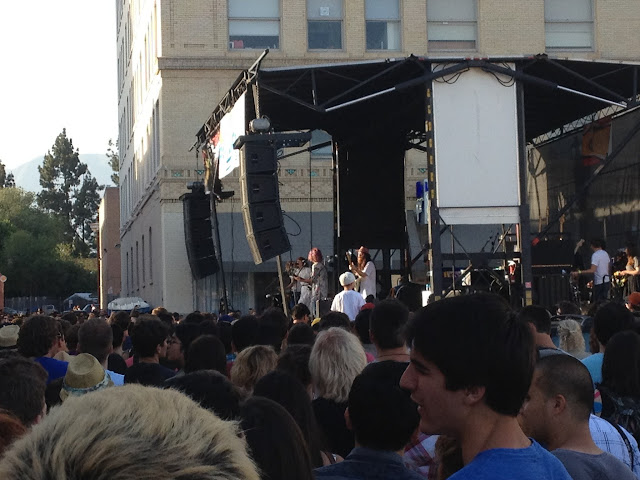 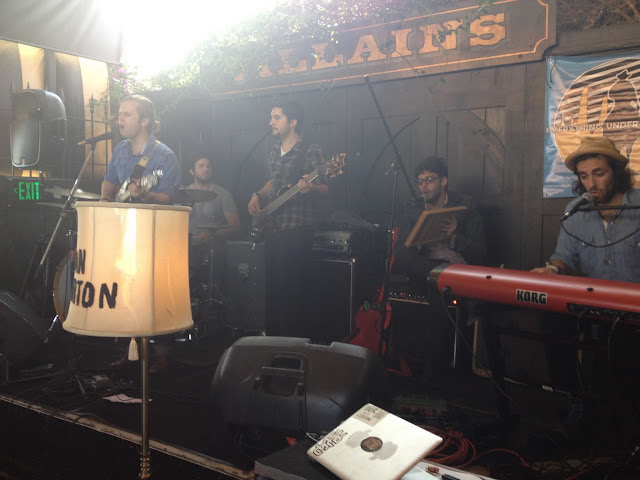 There's a nice little view of DTLA from the 1st St Bridge. 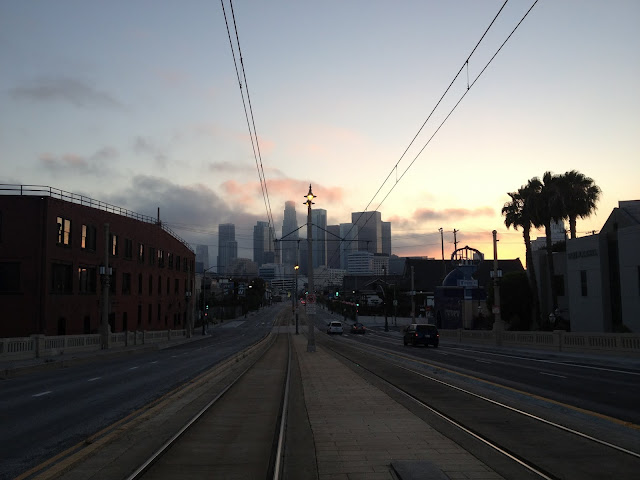 One Tuesday it was time to resume the Bachelorette watching and food truck Tuesday.  I'm still not caught up on that show.  Do I even care anymore about Emily? 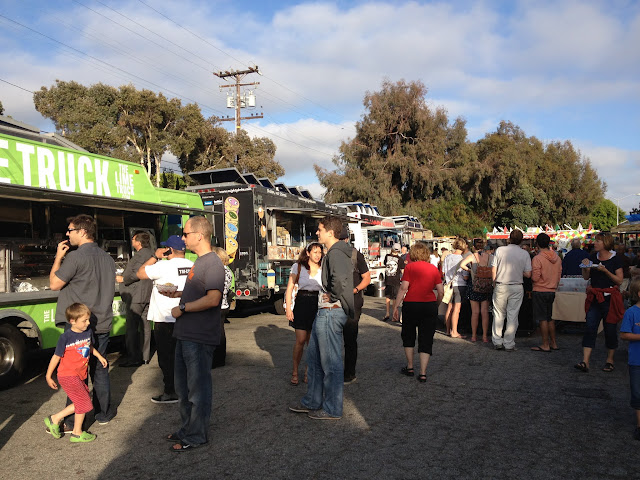 I thought I wanted fry bread. 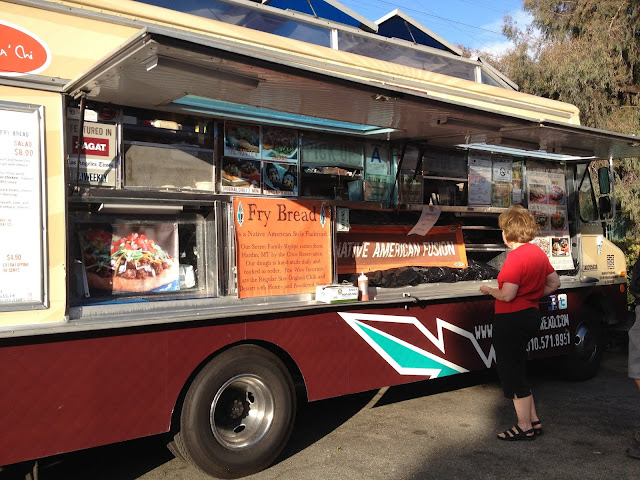 Instead we tried some dish from the Lime Truck, which is supposed to be all the rage since it's on a TV show or something.  It was good, but not great. 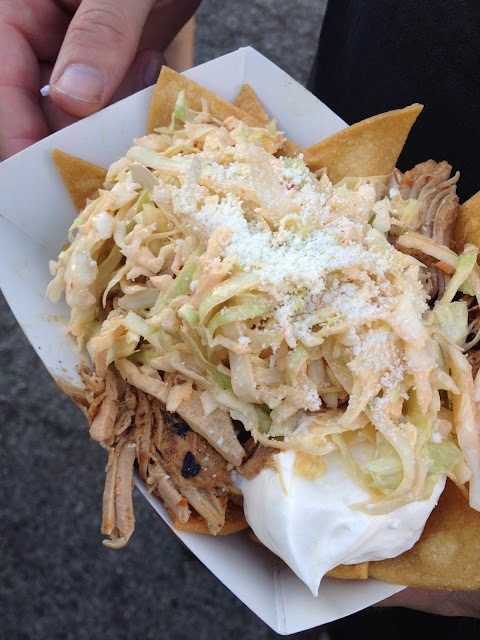 The Holy Aioli truck caught my eye, and soon I was ordering a super delicious sandwich and truffle fries.  I got the Holy Cow, which is steak with chipotle aioil, pico de gallo, sweet chili sauce, and provolone.  I liked.  Lots of flavor packed into that one. 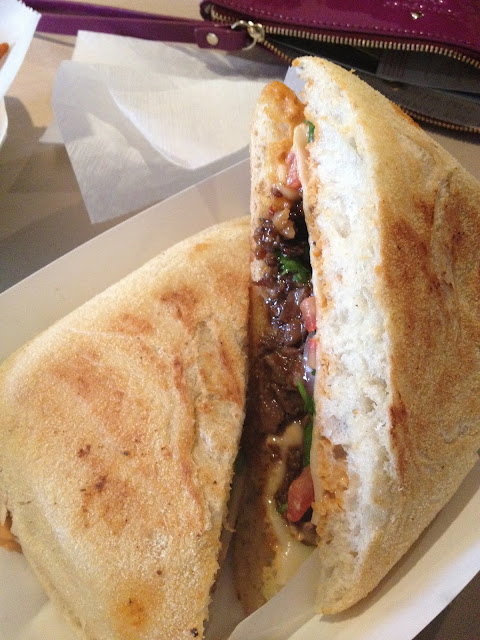 These food truck nights are the nights when I remember I live near lots of sand, palm trees, and a very large body of water. 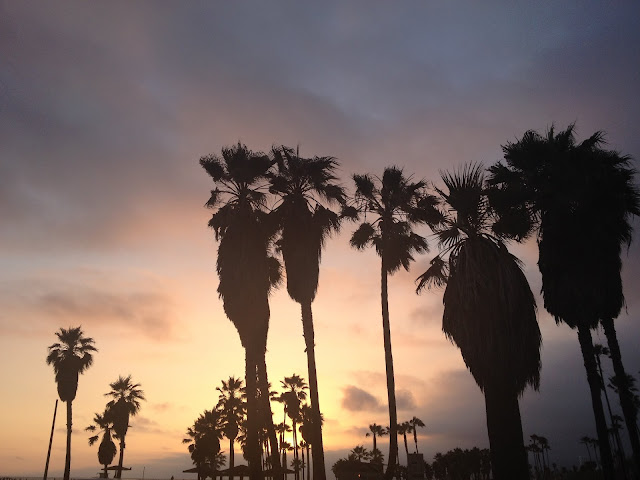 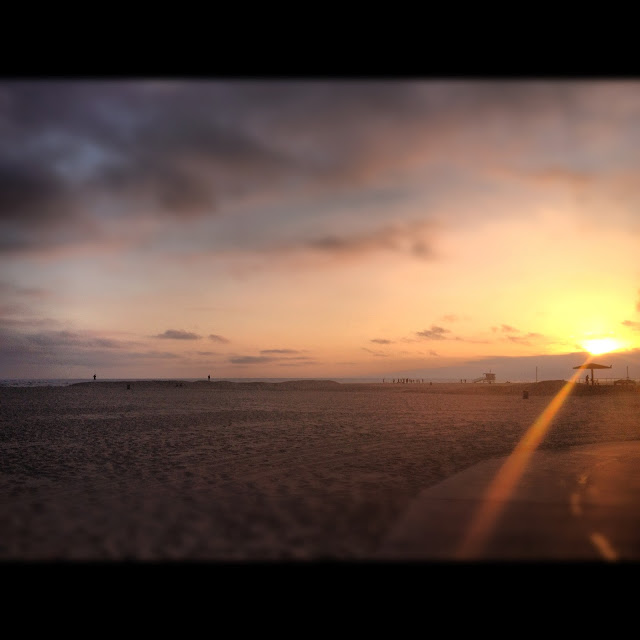 Somewhere in June I baked cookies.  Oh!  So I could use the walnuts from my grandpa's tree that he had given to me.  They'd been in my freezer.  Nuts belong in cookies. 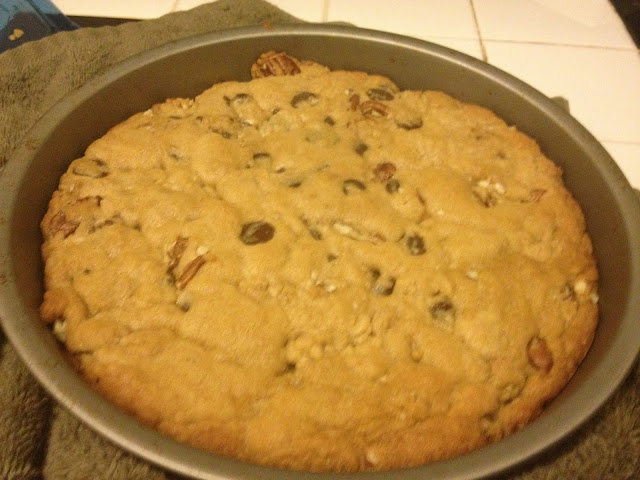 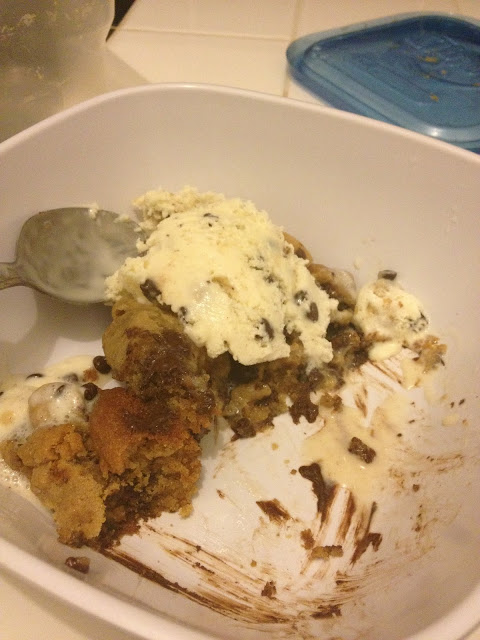 So if you don't know The Moth and the Flame, you should go check them out.  They're a few UT guys, and two members of the band drove into LA for a little show in Hollywood.  I grabbed their album and I recommend. 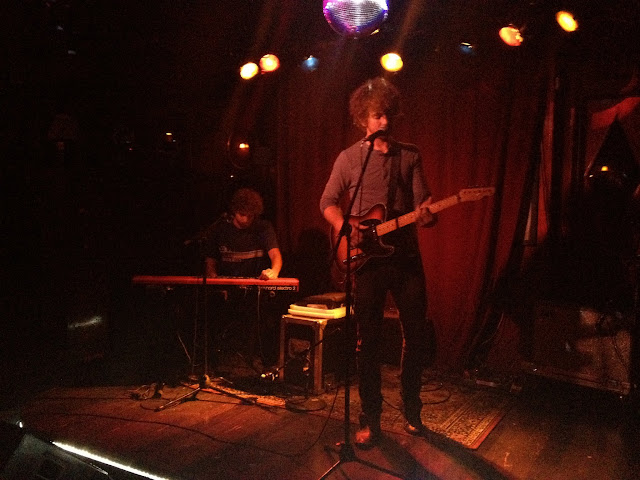 I went back to Jimmy Kimmel the next week with Liz, since I hadn't seen her in awhile and she really wanted to see Metric.  I did, too. 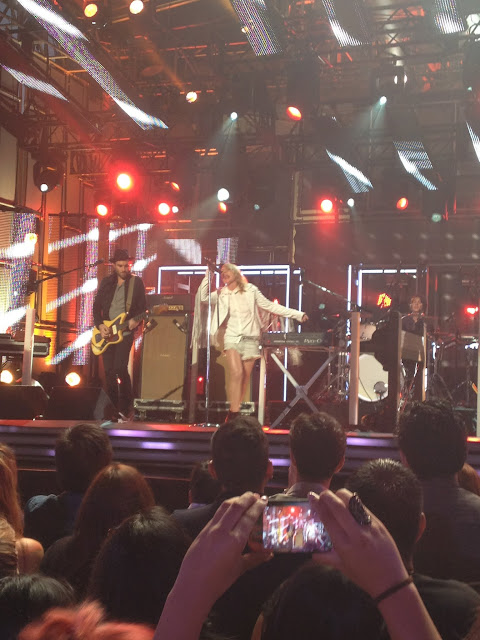 There was a Crumbs shop at Hollywood and Highland.  i got some.  Eh, they're alright. Georgetown Cupcake is still my fav and it's opening in LA soon! 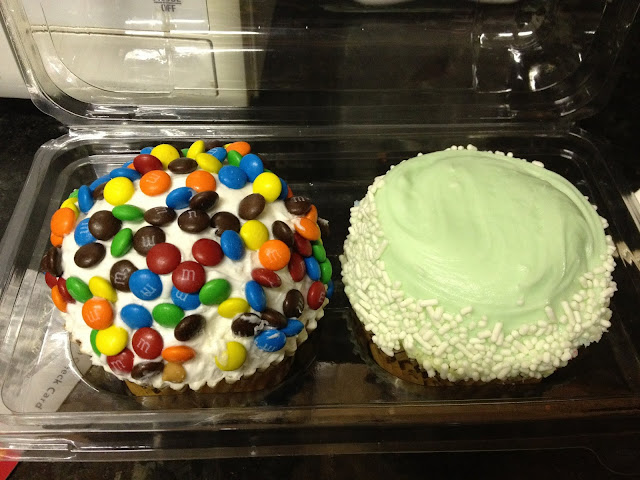 I also got called in a Thai order at my favorite place in Hollywood to take home.  Check my name spelling down there. 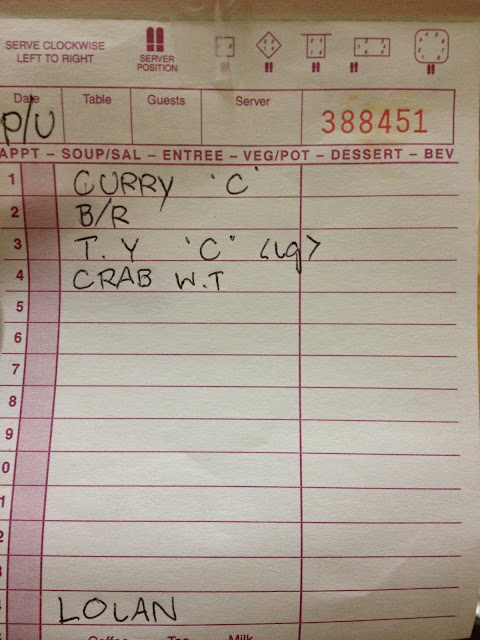 Marcello had to get some head shot lighting just right one night, for a project the next day. He needed some models.  I'm not showing you the ones I was in. 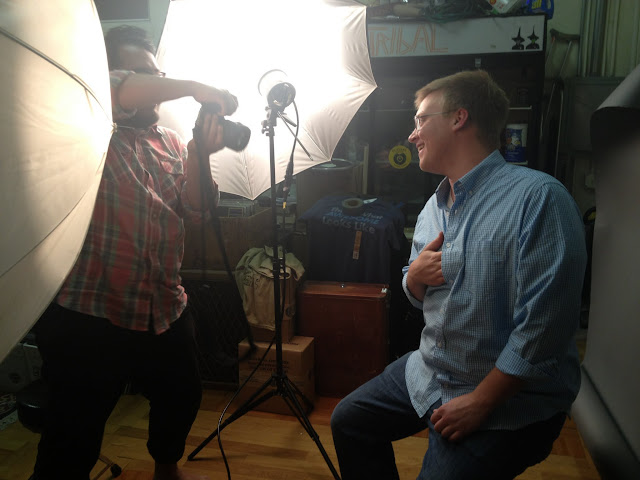 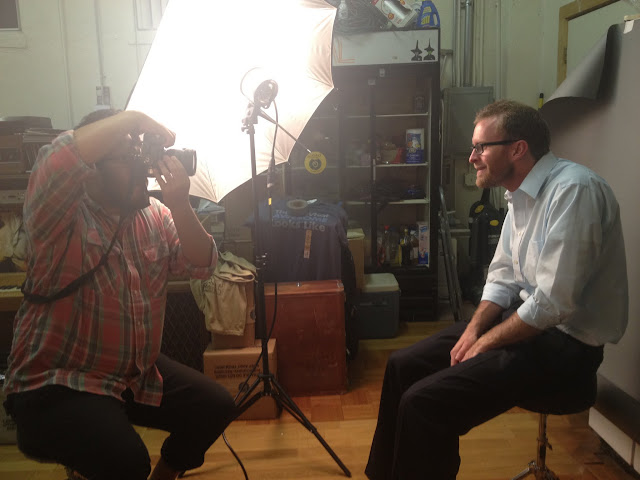 I was craving salsa.  I made some fresh, and I ate the whole bowl. 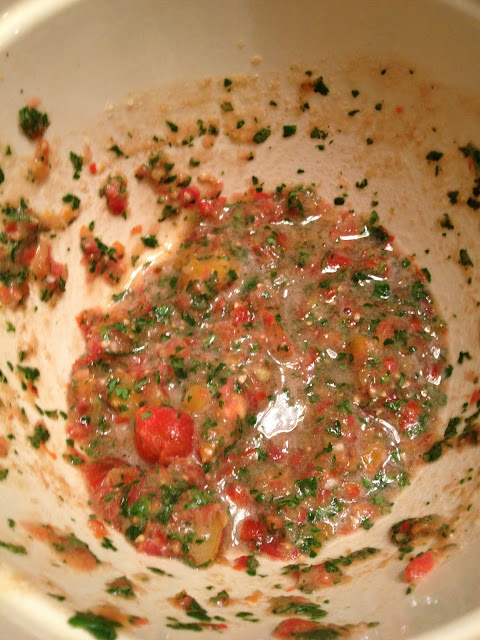 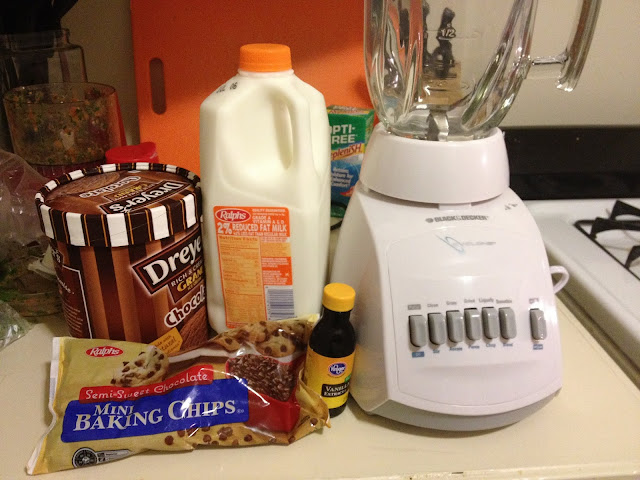 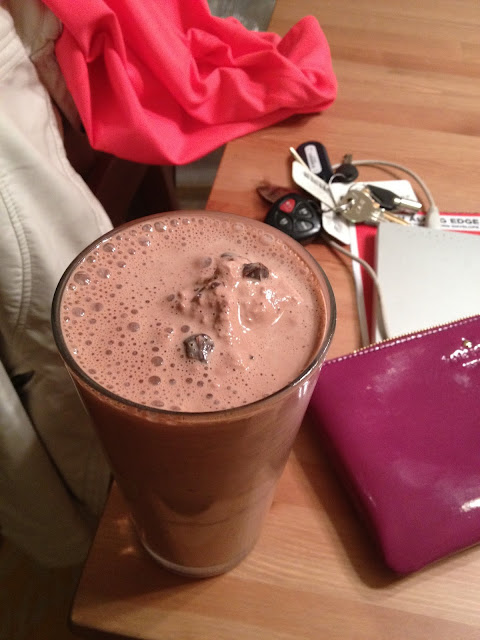 Oh, and one night me and Nate when to the Who Shot Rock & Roll exhibit at Annenberg, which is super great.  No photos, cause you can't take them, but you should go see it!  It's free, so go.  And then after we went to La Paella, cause Nate had paella on the brain, and cause Spain is mi pais.  We ordered a LOT of food. 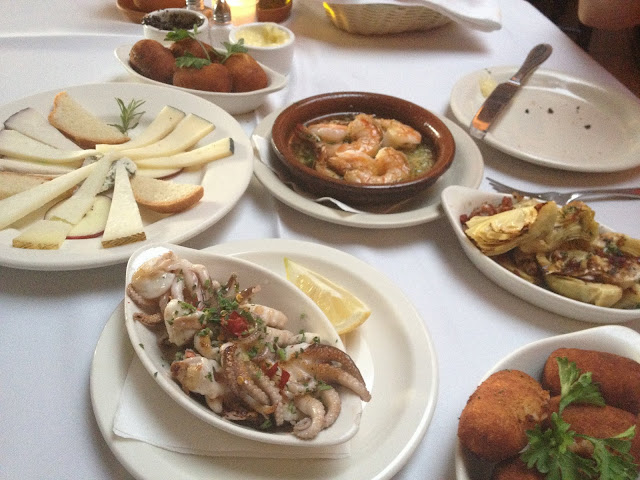