I Left My Heart in Mostar

Oh, Bosnia. Land of beauty and conflict and mystery. Also land of not very good GPS coverage. I knew this going in. I took some screenshots of Google maps, used our GPS (Gina) and hoped there'd be some road signs. Getting from Split to Mostar wasn't supposed to be too difficult. We just didn't have an exact address to go to once we got into Mostar. At least not one that showed up in a GPS. 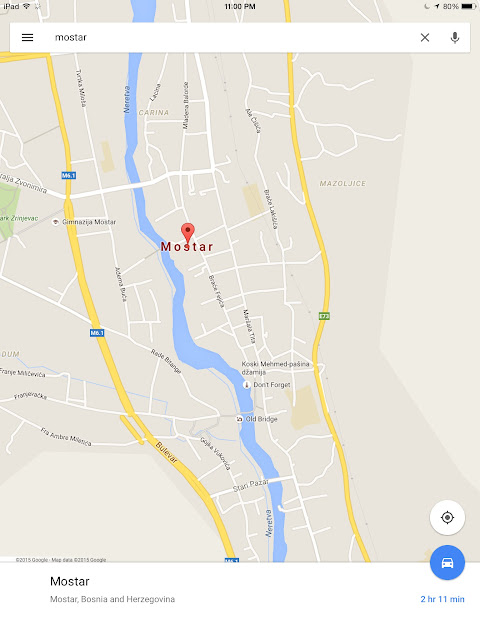 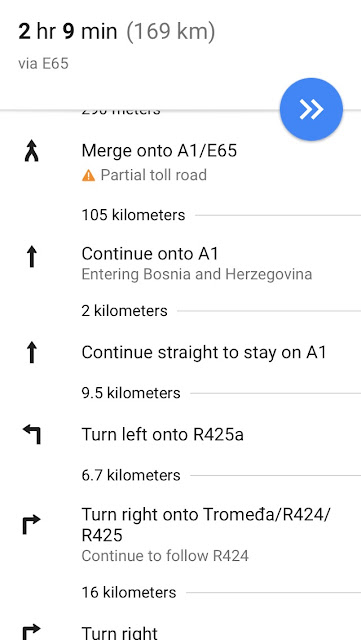 Yeah, our GPS wasn't too good. Even finding the turn off in Croatia, we were led astray. We relied on intuition and a sign we saw, and eventually found the border into Bosnia. We went through customs, paid a toll (once again, used my AMEX in Bosnia, which I thought was great), and then drove onto a nice road that ended after less than a mile? 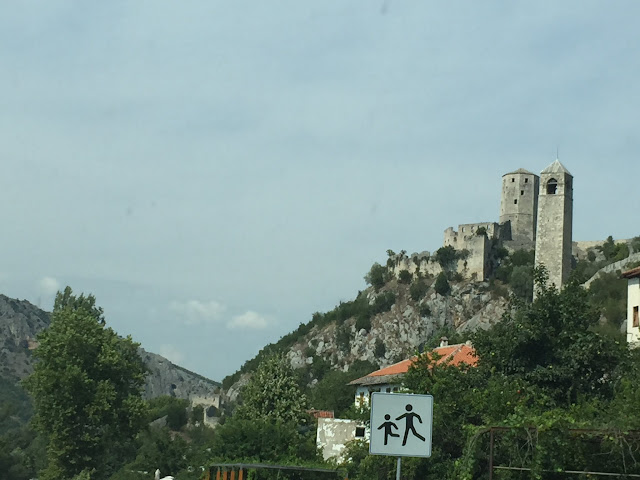 Clearly things are under construction here. Our GPS wasn't giving us more instructions, but we followed a sign off the nice toll road, and got into Mostar. Once there, I had a general idea of where we were going and which side of the river we need to be on, but couldn't find the right bridge to get over to the other side. We ended up down a long road that only has a pedestrian bridge, was only wide enough for one car, and I had to back up a ways and find a spot to turn around. A guy gave us some directions, so off we went.

We found the right street area, but couldn't tell where the house was. I was driving and trying to text the AirBnB host for better directions. I went back up the street, and whoops. It turned into a small one way again and I couldn't get back. Here goes another circle around the entire town.

Finally we made it back to the right area, and the host's husband came down to guide us back up an alley and to their house, which was set back behind the main area. We had a parking spot (yeah, that was another thing to always be on the lookout for with a road trip), and went into the place to get settled. Their home was one of the nicest AirBnB places I've ever stayed. If you ever end up in Mostar, I can tell you which place to book. Newly remodeled home with lots of nice touches. Wish we could've stayed longer.

I had booked a walking tour that started at 5pm, so we had a bit of time to meander through the city ourselves before meeting up with the group. First view - of the Old Bridge, from the Pazar Bridge. The Old Bridge was demolished by the Croats during the war - at one point the Croats and the Bosniaks were fighting together against the JNA (Yugoslav Army), but then turned on each other and demolished the city. The Bosniaks (Bosnian Muslims) and the Croats (still Bosnians, with Croatian heritage, and usually Catholic) each took a side of the river and didn't cross it during the siege. At one point the bridge was covered in tires to protect it - the bombs would bounce off, but it was eventually destroyed. Here's a video of the bridge coming down:


And here is the bridge now. Isn't it stunning? 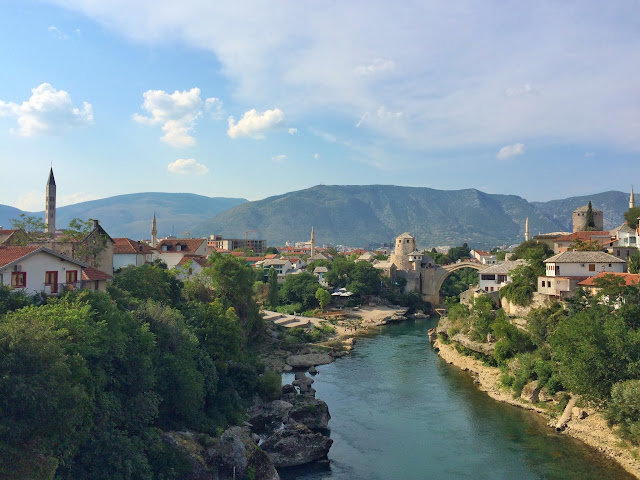 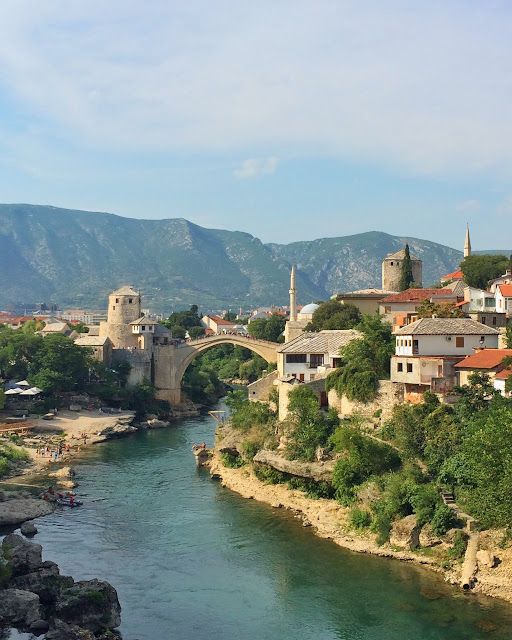 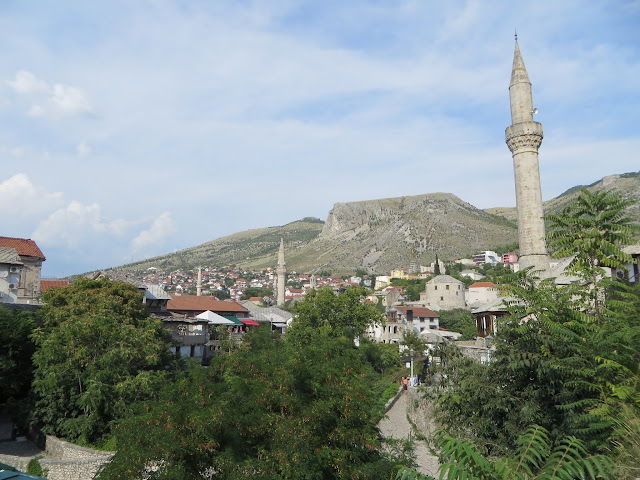 We made our way through town to a school, aka the old Gymnasium. It was at the front lines of the Croat-Bosnian conflict, so it was pretty much destroyed. It's probably the most colorful building in town. 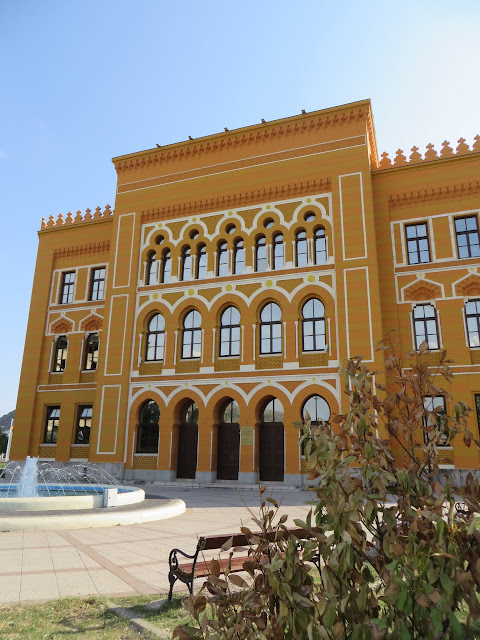 We met Arman in front of the school by the fountain, along with many other tourists who joined this free walking tour. I'd recommend it if you come to Mostar. 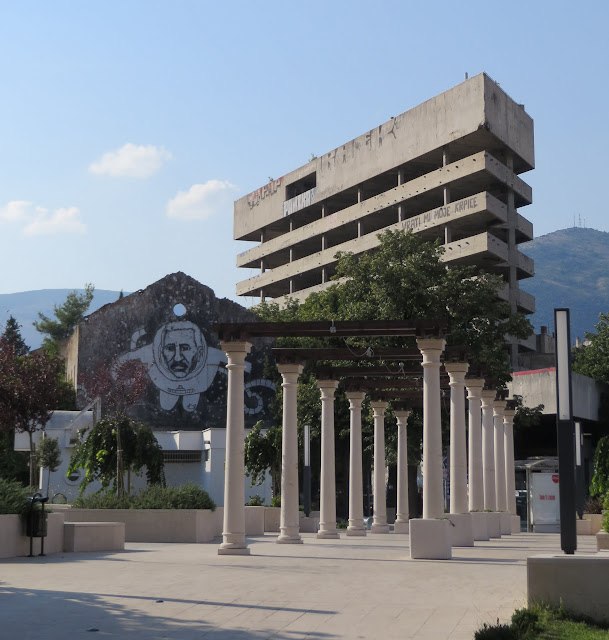 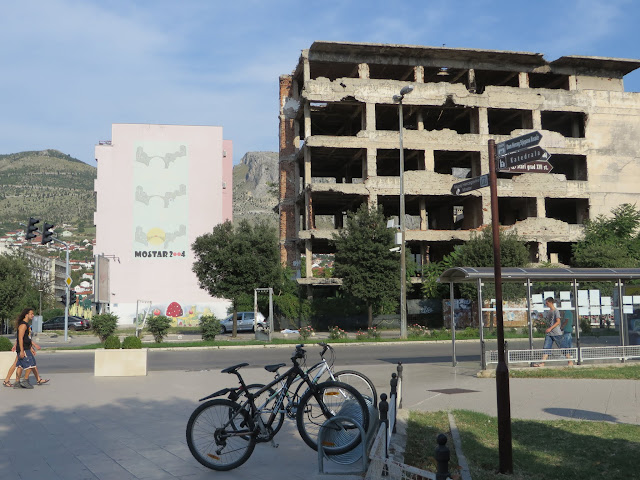 Many bombed out buildings remain, but a good portion of Mostar has been rebuilt, just like it was before the war. As we walked, Arman discussed the war and the divided city. Even though it seems peaceful now, it feels like conflict is just below the surface. And a poor economy and corrupt government don't help the situation. 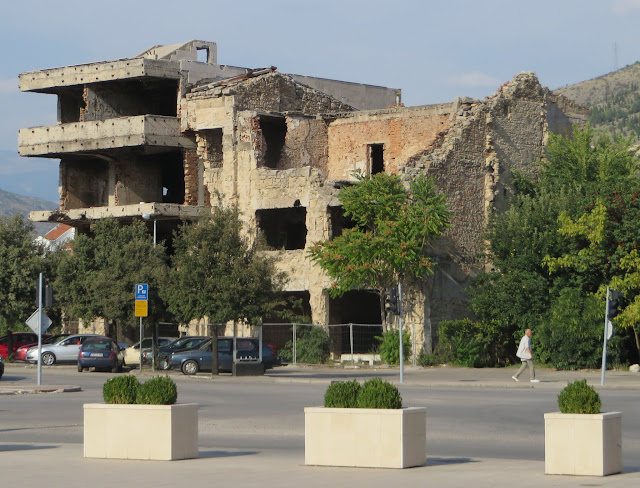 We ended our tour down below the bridge, where we waited to see any of the famous divers had gotten enough money to jump. The water level seemed a tad low - it can be much, much higher. I'd be terrified to jump. Forty euros is not enough. 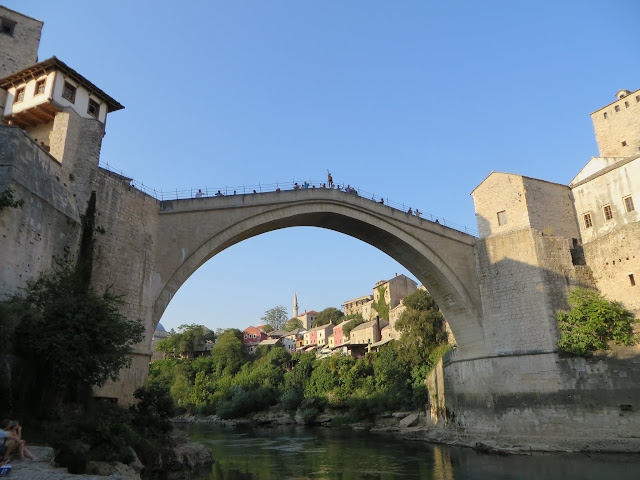 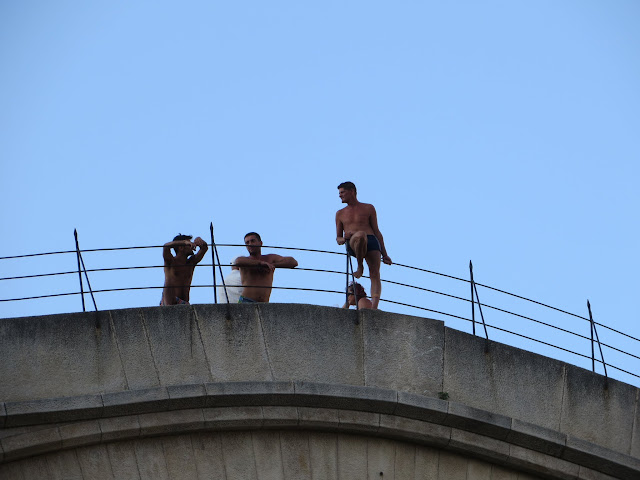 Red Bull hosted a diving competition a month prior - it looks awesome. 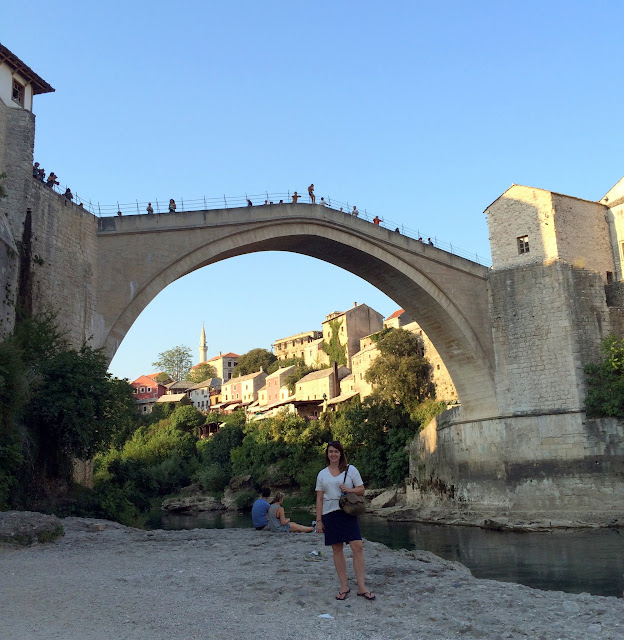 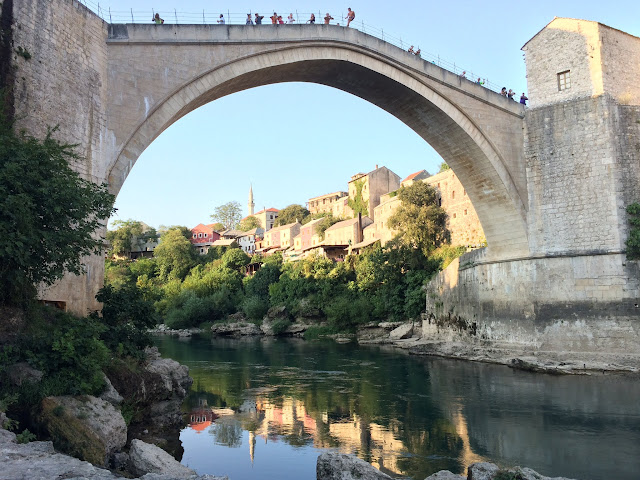 We meandered a bit more then found a place to stop for dinner. 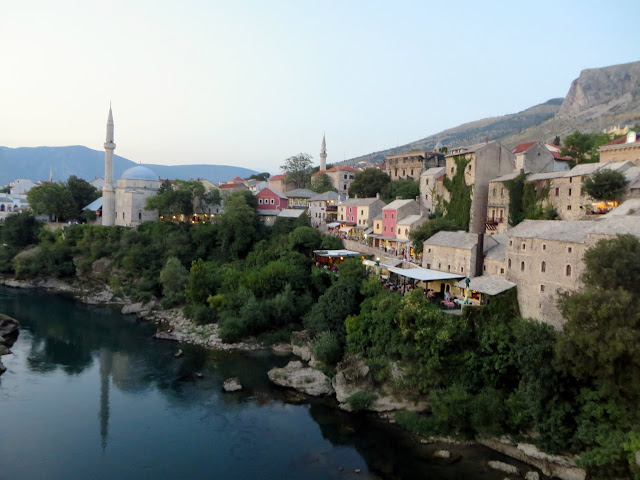 The bridge is actually kind hard to walk on. It's slippery. 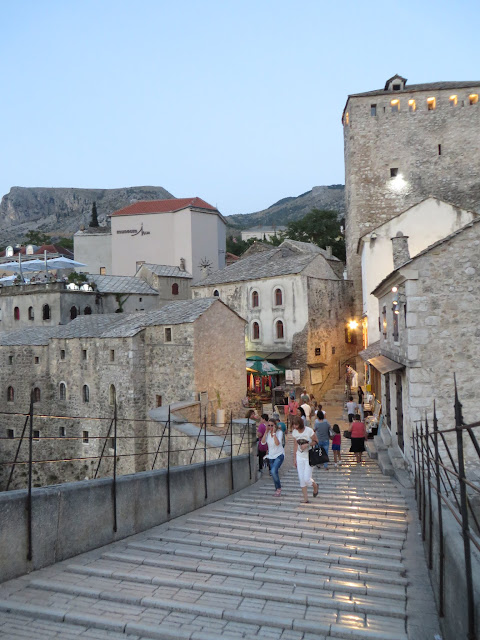 We ate at Sadrvan, which has traditional Bosnian food, and it was delicious. I don't think we meant to order so much. 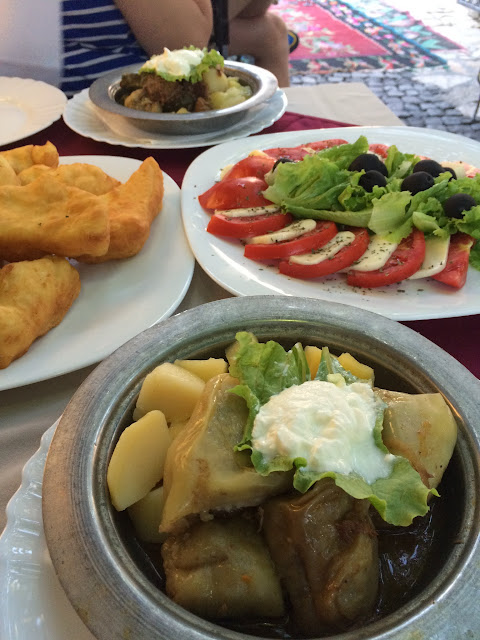 More walking. It's so beautiful here. 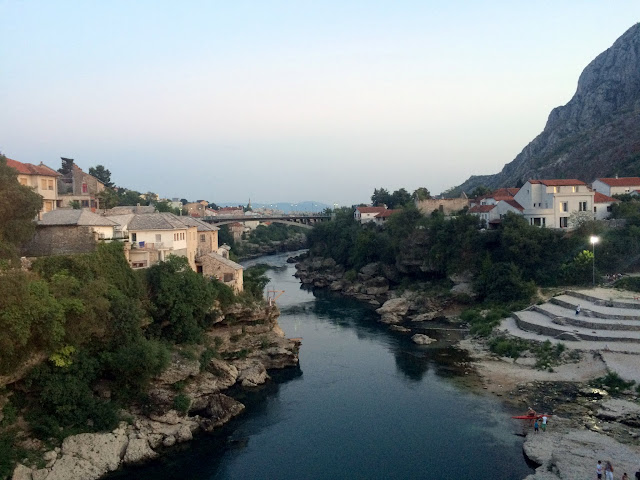 In the building structure over the bridge here, you can go to the top floor and see a War Photo Exhibit, done by a photographer who came to Bosnia as the war broke out. He has some interesting stories, and it's worth seeing. 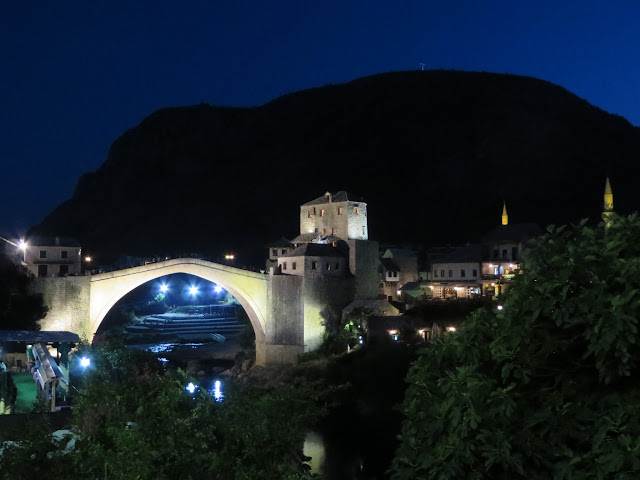 The cemeteries are full of people who died in the war. You see very few dates that don't line up with the war. 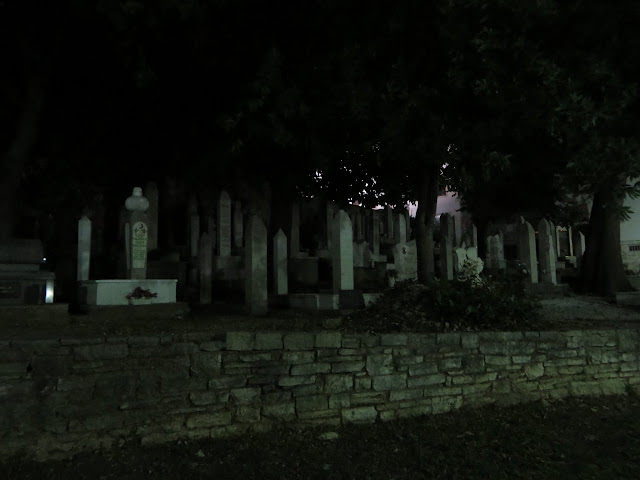 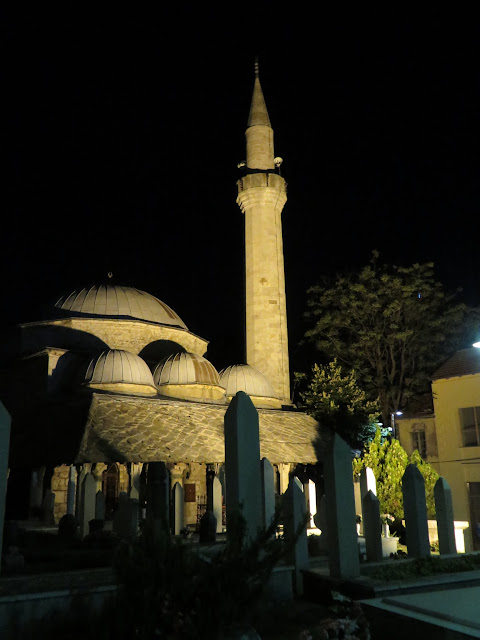 We headed home for the night for a warm shower and to watch the Bosnian national soccer team on TV. Cause when in Europe.... 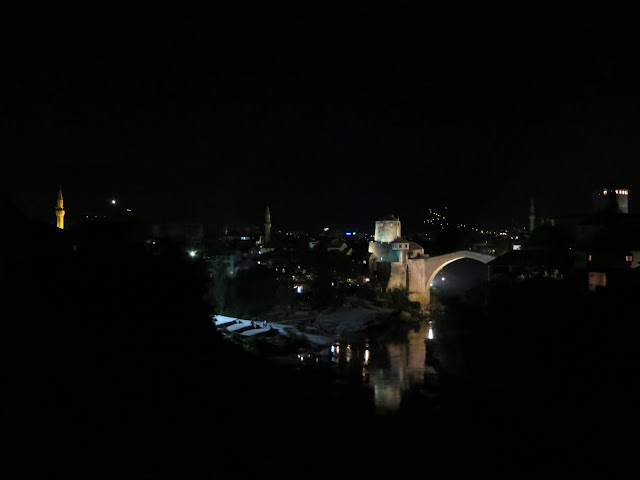 I fell in love with this beautiful city and hope for its peace for years to come. I will be back.