It was definitely after dark as we pulled into Split, and we'd rushed to get this far south so we were primed to jump into Bosnia next. Split's a large city, and we came in via freeways and overpasses, which is the first I'd seen on this trip.

We'd booked a room in a little guesthouse near the old city, and we had a tough time finding it in the dark. We knew we were on the right street, but didn't know where to park and had to keep moving down this tiny one-way to avoid a pileup behind us. We were trying to text the girl who spoke English, so she could coordinate with her parents to come outside and help us. We ended up driving a huge loop and dodging some tiny throughways, but finally made it back and found her father. He helped us park right here, next to a restaurant. It was our first big stressful moment, but we did it. Another lesson of driving in the Balkans - you can park just about anywhere. Just pull over, pop up onto the sidewalk, whatever. 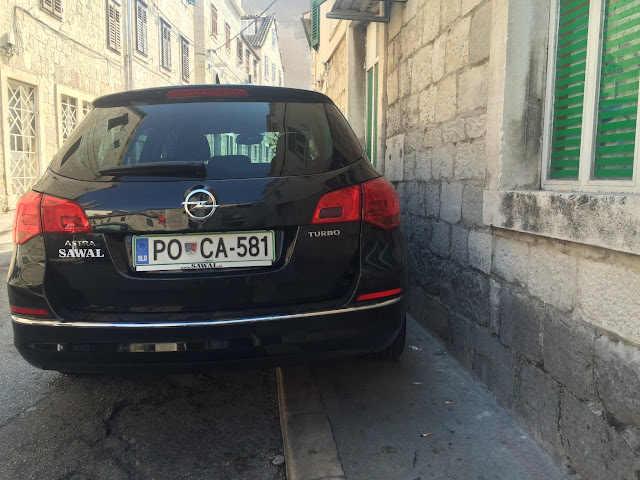 Down the block, through a courtyard, and up the stairs. It was a really nice little place, and very nice people who ran it. Not much English, but we figured things out just fine. We hopped on wifi and planned our next couple nights, then got to sleep. 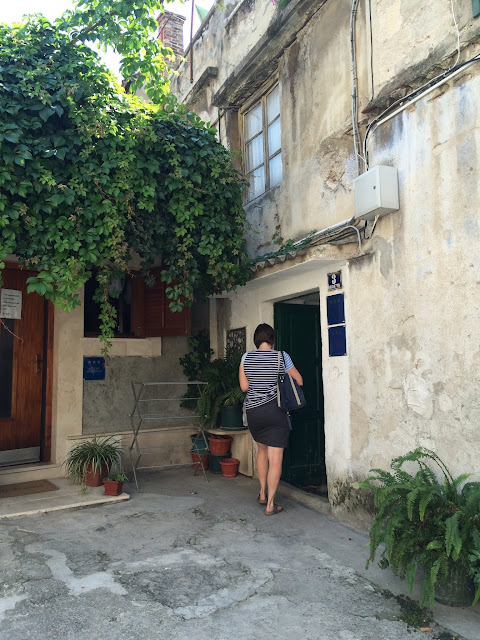 We got up in the morning and headed over to the grocery for some breakfast, then found ourselves a bench and watched a ton of boats in the marina. 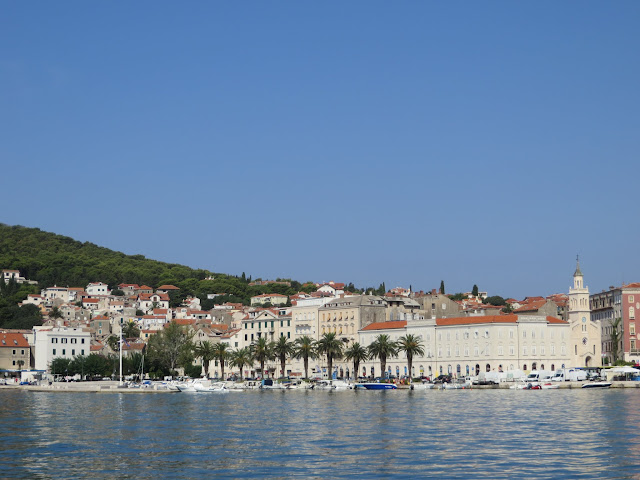 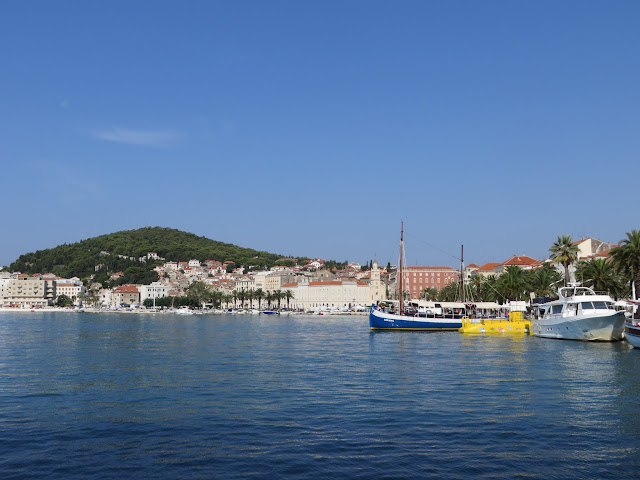 The thing to see in Split's old city is Diocletian's Place, another UNESCO site. Diocletian was a Roman Emperor from 284-305 AD, and he retired in this area. His palace is more like a walled city and is currently filled with hotels, shops, restaurants, etc.

This day was HOT. And filled with cruise ships and tourists. My advice - stop into Split and spend a morning seeing this palace, but then hop a ferry and get out to some islands where there are fewer people. That's my plan for next time.

We bought a ticket to see most of the sites, starting with the cathedral.

And then we climbed the bell tower, as one must do. See the entry gate into the city? 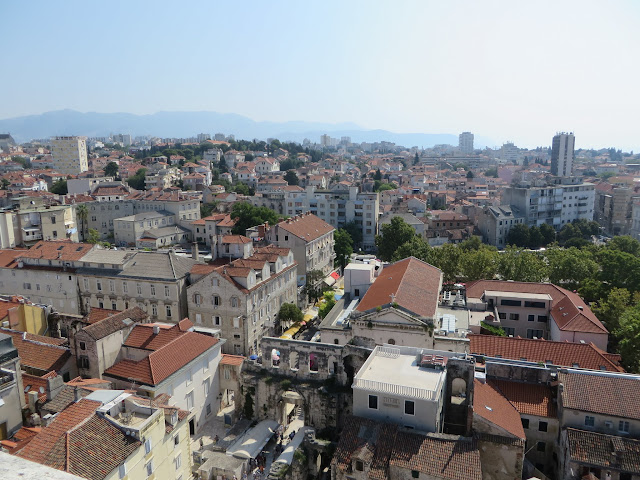 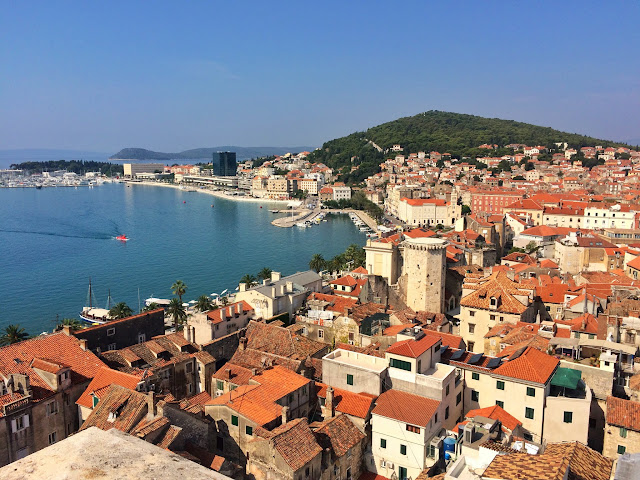 I'm usually not afraid of heights when climbing things like this, but on the way down, after seeing the crowds and looking up at the structure, I was glad to be on the ground again. 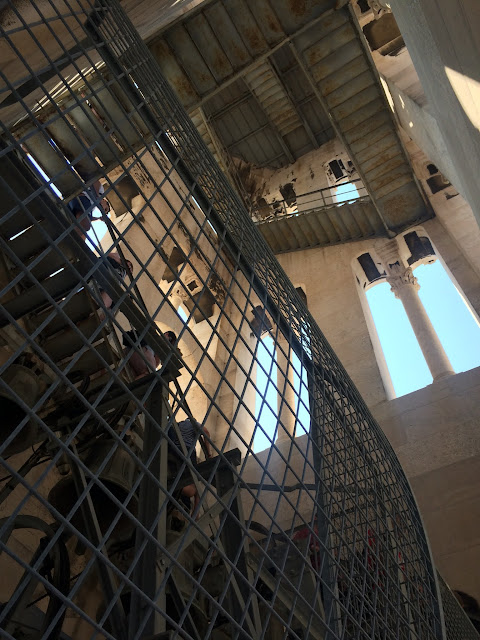 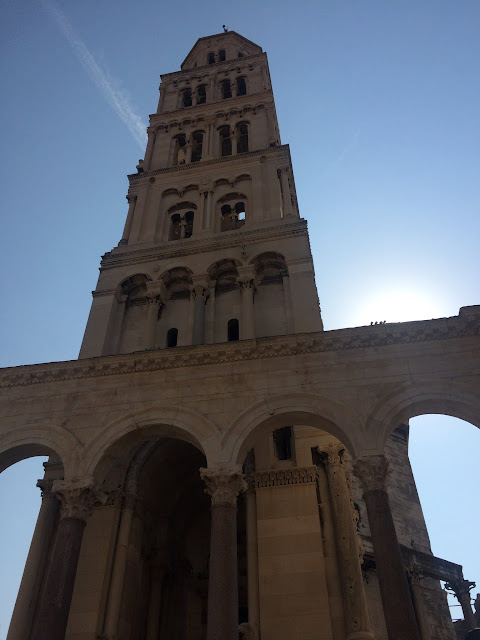 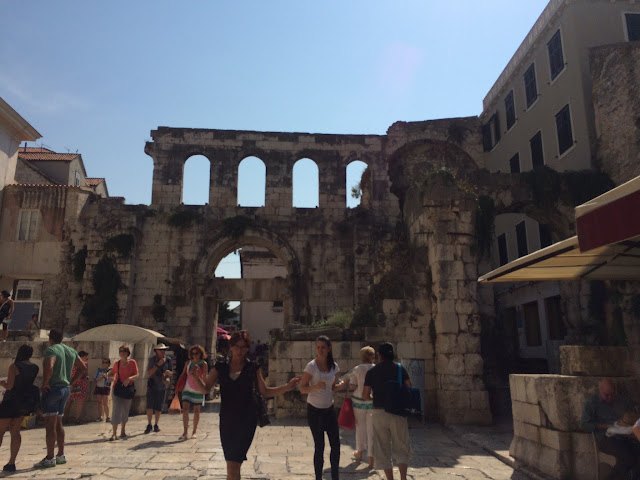 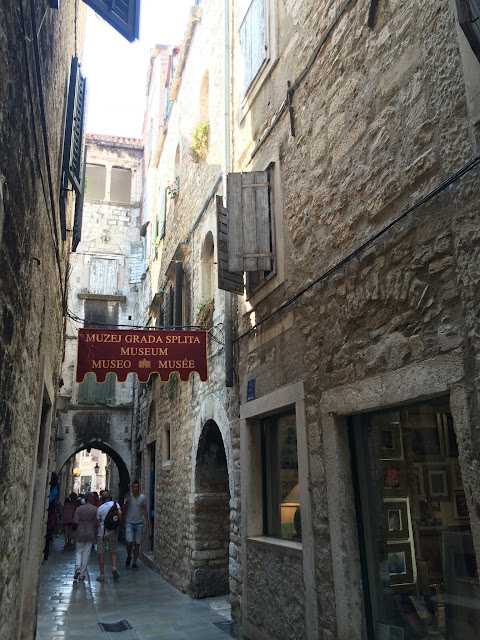 Here I am in front of the Golden Gate. 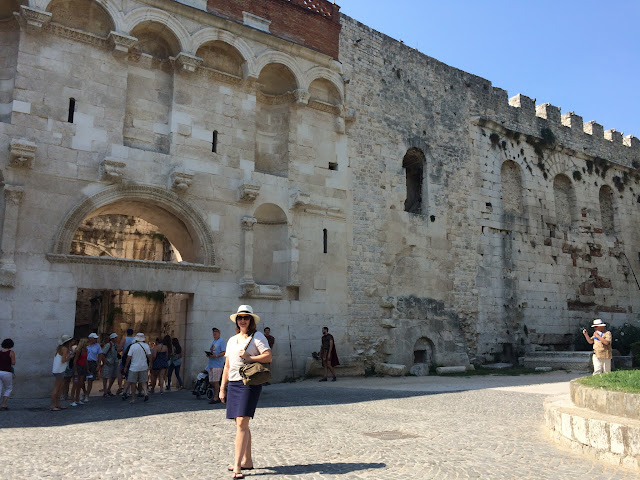 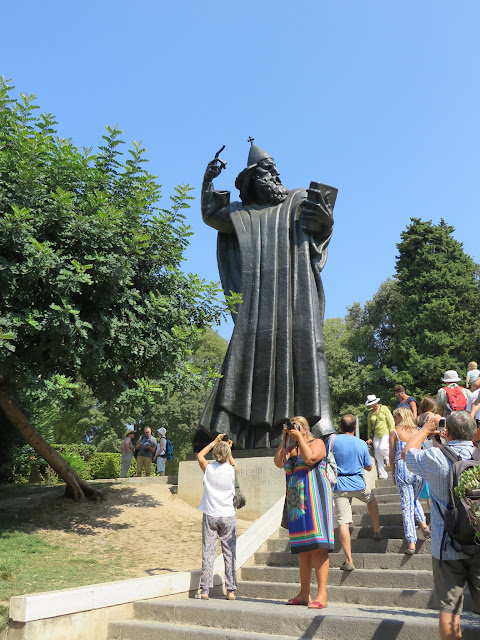 I should've taken my photo with these guys, but whatever. Do their friends know this is their job? Do they try and avoid being seen by their buddies? Or is it cool that they have this job? I'd like to know. Those are some pretty short skirt things. 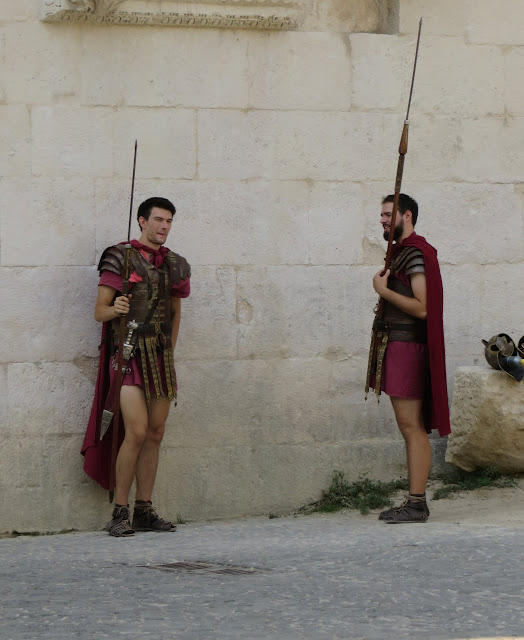 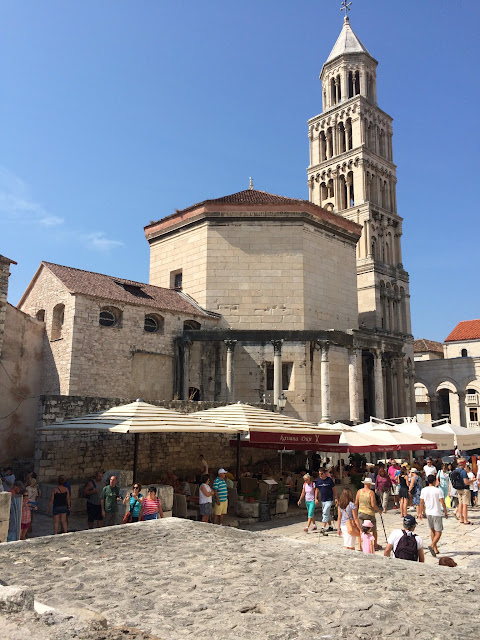 We'd had enough of the crowds, so we walked to the nearby beach of Bačvice. We didn't have swimsuits on, but I kinda wished we did. The water was perfect. 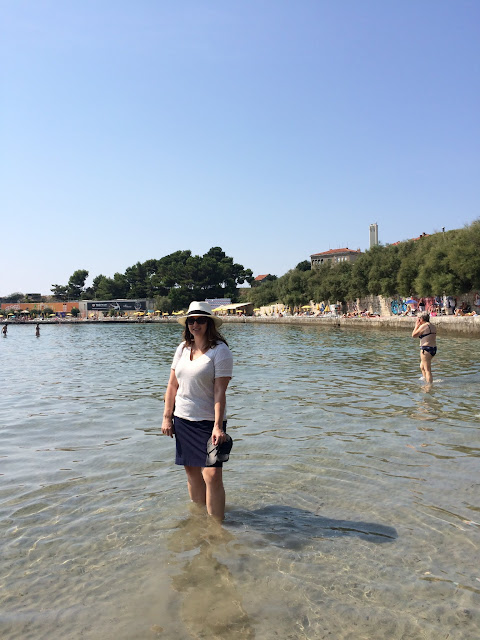 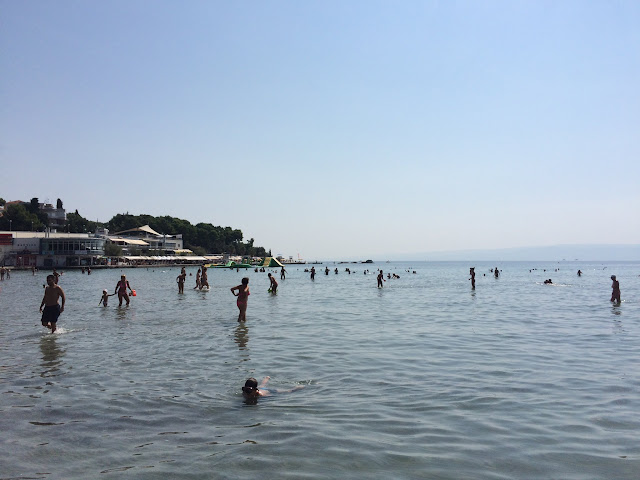 I needed a Coke. I drank quite a bit on this trip. Sorry, Dr Pepper. Wish you'd shown up in Europe more often. 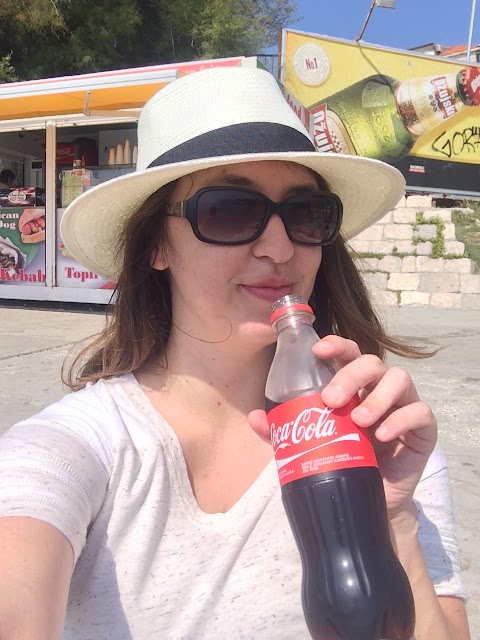 More snacks for the trip - I love the biscuit aisle. 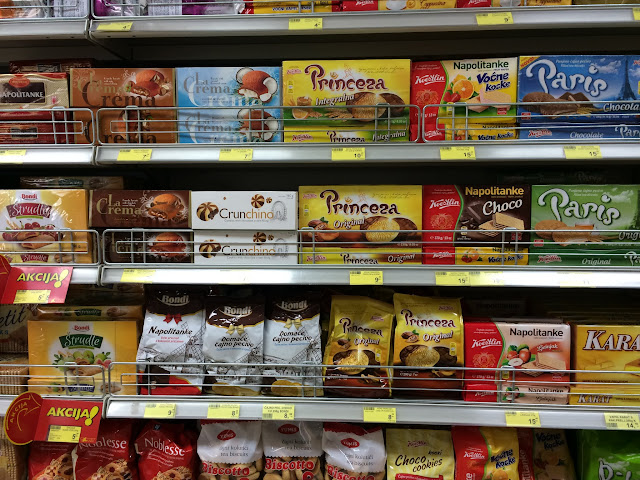 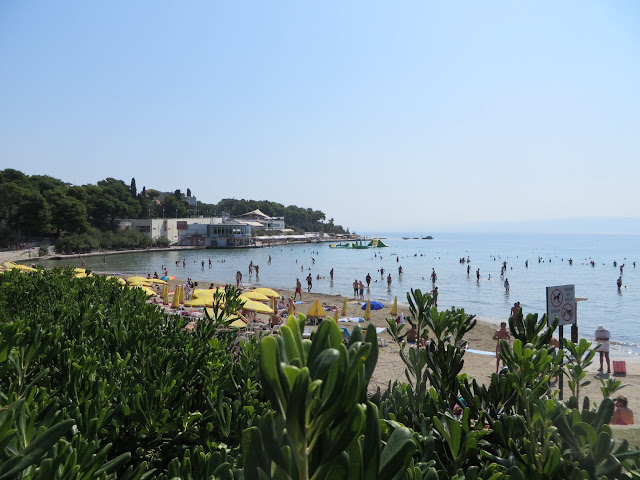 Hey Lauren! Thanks for commenting on my blog. I would love to visit Croatia one day! It looks absolutely beautiful in all your pictures. You are so smart to do it while you are single. Traveling with kids is so hard. I am so glad you found my blog :) Now you got yourself a follower!