They're everywhere. Here's another bit of entertainment from the hometown newspaper. I kinda wish I could've seen this one.

A Hodgen man took what appeared to be a protest against the government too far on Wednesday. Ronald S. Dehart, 57, has been booked into the LeFlore County Detention Center on charges of assault and battery with a deadly weapon, assault on a police officer and resisting arrest.

Around 11:55 a.m. Wednesday the Poteau Police Department was flooded with pproximately 30 to 40 calls over a two minute period regarding an accident which resulted in a bus blocking several lanes of traffic at the intersection in front of Wal-Mart on North Broadway.

When police arrived on the scene they found a man, later identified as Dehart, sitting on top of the bus screaming at motorists who were stopped. Dehart was screaming that the US Government had framed him and that he was innocent. The 1980 GMC bus, on which Dehart was perched, had similar messages spray painted on the side and back.

Officers Eric Fairless and Michael Jackson, who responded to the scene, attempted to speak with Dehart to no avail. Poteau Assistant Chief, Ronnie Branscum, stated that Dehart refused to speak to the officers directly and failed to follow their orders to come down off the bus.

The officers then climbed to the top of the bus themselves to take Dehart into custody. At which point Dehart attempted to strike one of the officers and pushed Fairless, who narrowly escaped falling from the bus to the pavement below.

After a brief struggle Fairless and Jackson were able to place Dehart in handcuffs and remove him from the top of the bus. After being taken into custody Dehart was transported by LeFlore County Emergency Medical Services to Eastern Oklahoma Medical Center to be evaluated. 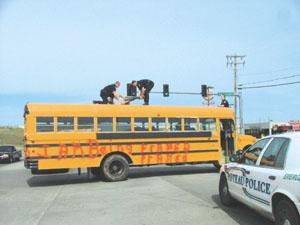