My lovely MCB had been planning (aka stressing about) the perfect Valentine's weekend for the past couple months.  He's a romantic at heart, and while I haven't particularly paid too much attention to the day in years past, he happens to love doing nice things on this day.  Since I find myself happily in a relationship, I was more than happy to let myself enjoy whatever it is that he had planned.  It's not hard when he always does such good things for me.

He can't really keep a secret very well and always demands to know upfront when I tell him I have a surprise for him, but he did a pretty good job, except for the part where he hinted about going on a helicopter back in January.  More on that later.

We try to see each other about every 3 weeks and decided during Southwest's fall sale that we were content to celebrate belatedly on the last weekend of February, which turned out to be a good idea.  The actual day is always overcrowded and overpriced anyway.  Not to mention LA traffic.

I flew in Thursday night and we did the usual - sushi in the neighborhood.  While walking back home, we passed a nail salon with window decorations, run by Asians, of course.  Josh mentioned that it was a little early to be celebrating Easter, and I had to laugh.  Chinese New Year - Year of the Rabbit, duh! 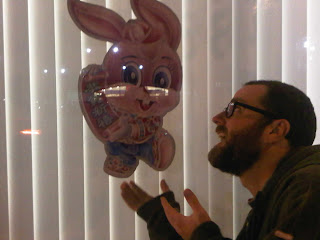 ,
Friday was drizzly rain so I drove MCB to work (he bikes) then drove out to have lunch with this lovely lady.   I kicked it around Santa Monica until 5, when MCB's work happy hour starts.  I went upstairs and met the whole office - they're quite the rowdy fun bunch.  We had a relatively quiet night in since the weather was poor, it was kind of cold, and we had a big day ahead.  I made really easy Chicken and Dumplings and got a good night's rest.  All I knew was we need to be out the door by 11am.

Once we started driving south, I sort of had an inkling where we were going, and I was right.  Down into Long Beach, to the Catalina ferry.  I'd never been out that way, though every time I'm in California and it's a clear day, I always make sure to look over at Catalina!  The ferry takes just over an hour, and once we were settled into our seats, the captain pointed out that there were four-foot waves with three-foot chop on top, and we'd best stay seated.  Uh oh.  My poor stomach almost didn't make it, and the crew was passing out bags to some people.  As long as I didn't look outside and got distracted in conversation, I was okay.

Finally, we made it!  Avalon is a picturesque little town with houses on the hills and no traffic other than golf carts.  It's certainly a different way of living.  Oh, except as soon as we got there, I got out my camera to capture it all, and the battery was completely dead, despite charging it all night.  Cell phone pics to the rescue. 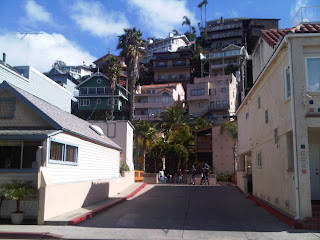 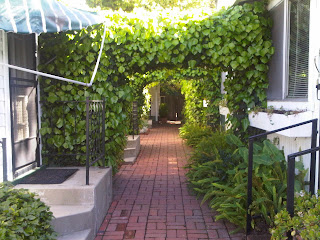 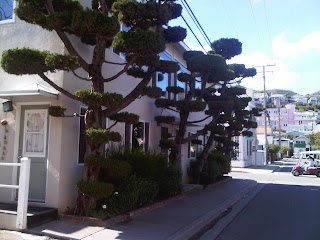 There was a vintage bus tour that goes all over the island (winding and steep roads, it warned), and if only it wasn't three hours long, we would've taken it. 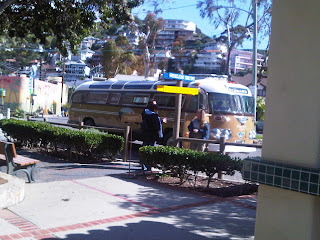 The big round building is the Casino - though there's no gambling.  Casino apparently just means gathering place in Italian, so it hosts a theater and a ballroom. 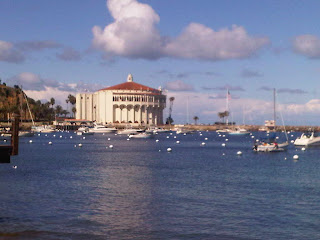 We sat outside and had a little picnic, and watched as a man motored in on his small boat to his larger one, dog in tow.  When he got on board he started blasting the first Counting Crows' album - a little bit of nostalgia for me.  I still know every word to every track. 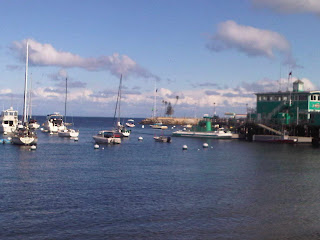 Despite the forecast of rain, it managed to stay mostly sunny and only slightly cold. 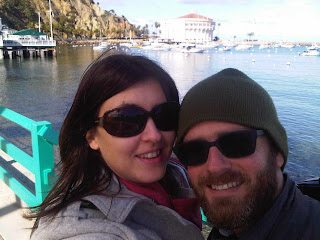 The water around the island is pretty clear, and it was overrun with scuba divers.  I guess that's the thing to do, unless you're golfing or bird watching. 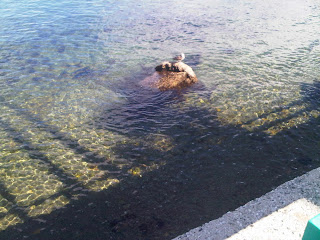 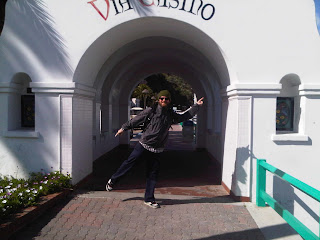 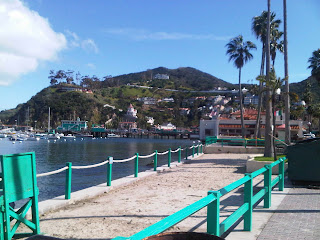 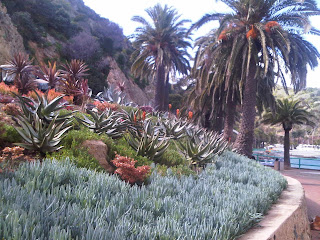 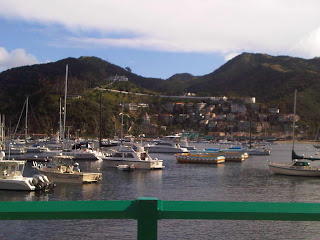 Next time I'll stay overnight at the Hotel St Lauren and they'd best give me a discount.  I made a quick stop at the Vons for some Dramamine, otherwise I'd not be so happy on the boat ride home. 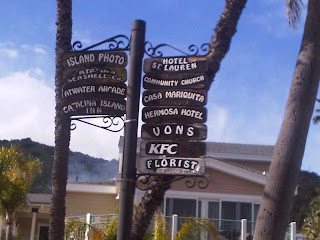 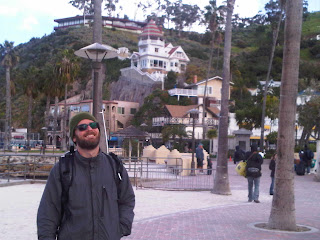 The boat on the back was much larger.  I thought - no problem them, I won't feel the waves as much.  False.
I tried sitting on the bottom in the middle (smaller range of motion), but in the end just had to put my head down and not look at the wildly fluctuating horizon.  Barf bags all around, some people had to use them, and I was thankful to get off the boat.  MCB apparently has a stomach of steel. 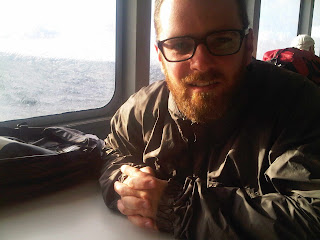 At this point I kind of thought the helicopter thing was off the table - I'd thought maybe we'd heli out to Catalina.  When we didn't, I figured maybe MCB changed up the plans since he'd hinted at a helicopter in January and I'd guessed correctly about his plans and he wanted to switch it up now.  After arriving back at the port, we started driving south again.  I honestly had no clue where we were going.  We took some exit and drove inland.  He told me that surprise number two wasn't necessarily time dependent, it would happen whenever we arrived.  I was even more confused.

Finally after a drive though the Long Beach airport, we wound our way around and ended up at - you guessed it - LA Helicopter.  Whoa!  I started getting nervous.  My fear of flying has gotten worse as I've gotten older, and getting into a tiny capsule on a really windy day in an apparatus that's tough to fly was a little scary.  We walked in, met the pilot, and he looked like he was about 21 years old.  Maybe I grilled him a bit, but after hearing that this has been his full time job for the last 4 years, I felt okay.

After a quick safety briefing and waiver signing, we walked outside and got into this helicopter: 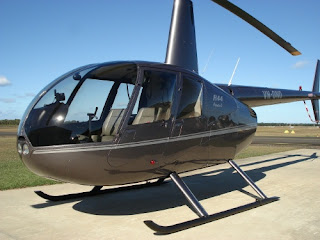 Once again, really bummed that I didn't have my great camera that takes really good night shots.  Guess I'll just have to go on another ride sometime.  We put on our headsets, Troy started warming it up, and I really didn't know what to expect.  He said it was a little windy, but the helicopter could take it.  Ummm...

Finally we were ready to take off.  It was just like THE FUTURE - like we were in this hovercraft car.  We barely came off the ground and kind of glided around into this gradual ascent.  And before I knew it, I was loving it.  It's really, really cool.  We headed out towards the water as the sun was going down (darn clouds were in the way), the wind wasn't bad at all, and we glided up the coast. 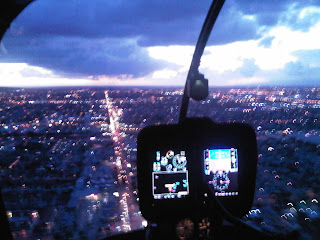 Once you hit LAX airspace, you had to drop altitude way down, which is kinda cool.  Then right back up.  We went over the Santa Monica pier, headed inland over Beverly Hills, I swear I could've touched the Hollywood Sign, then we cut south over downtown. 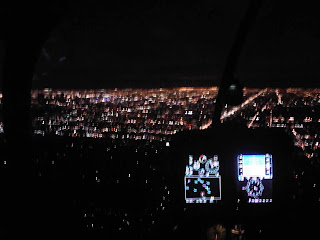 Altitude about 1500 feet, but that helicopter model can actually go up to 14,000.  Speed, about 130mph.  We covered quite a bit of ground in 45 minutes, but it felt like we were just gliding with ease through the air. 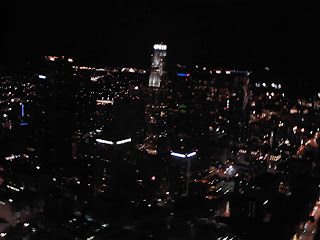 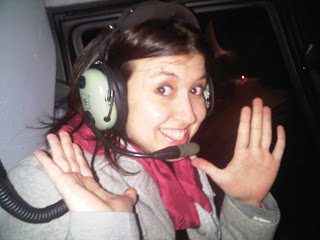 I am now a helicopter convert, and like my mom said - this date is just like the Bachelor.  Sigh. 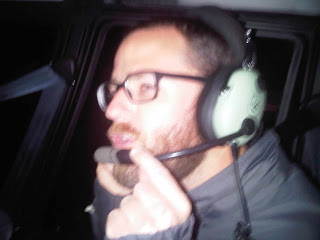 Landing was really cool too, we just swooped in slowly and ever so softly set back on the ground.  Really, really awesome hovercraft stuff.  Troy was a great pilot, great tour guide, and if you ever want to take a ride, call him up.

Even though the day was awesome so far, it still wasn't over!  MCB had one more trick up his sleeve.  We drove home and changed clothes, since we were about to explore some fine dining at Valentino.

This place is posh.  The Yelp atmosphere description says 'power broker,' and you could definitely imagine some A-list stars meeting with agents here.  The waiters are all older Italian men, slightly fussy, and running around like busy madmen.  The man next to us (celebrating his anniversary with his wife who didn't say a word all night) schmoozed his way into his neighbor's conversation, taking pictures with the granddaughter for her birthday and passing out business cards.  He wouldn't shut up.

We opted for the 4-course menu - I had a lamb prosciutto with salad and a citrus dressing to start, an amazing asparagus and leek risotto, and beef tenderloin for dinner.  I think MCB started with a seafood salad and ended with the octopus.  I tried it, despite my texture issues.  Actually pretty tasty.  Dessert was a trio of small dessert, a strawberry sorbet, a coffee flan (ugh), and a chocolate dish that was great.

I crashed hard that night, after such a long day of awesomeness.  Pretty much the best V-day I've ever had, and I know how lucky I am.  Best part is, MCB got to do all of this with me - and his efforts certainly paid off.  I'm kinda smitten :)
- March 06, 2011

Epic...that's no joke. I wish I could have jumped in your purse and enjoyed the adventures too!