Remember that time a couple years ago when I was driving back to Phoenix after spending the weekend in LA, not totally realizing that M83 was playing with the LA Philharmonic right then at Walt Disney Concert Hall? 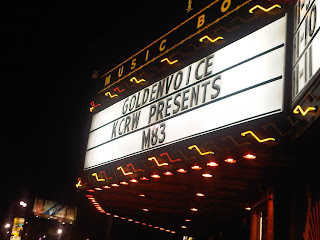 I first came across M83 as part of my 2005 pre-Coachella crazy research for optimal festival experience downloading.  Strangely, I don't remember actually seeing M83 at Coachella, but I'm sure they were there.  And I've liked 'em ever since.  Saturdays = Youth?  Best part of 2008.  Hurry Up We're Dreaming, close to best of 2011.

I had high hopes and I wasn't disappointed.  There were a few lulls in energy and as Randy J would say - parts of it were a little pitchy.  But overall, pretty excellent.  The place was packed with a hot crowd.

Pleasantly surprised to hear an old favorite - Teen Angst, which kinda summed up how I've been feeling this week, as things have gotten a little stressful.  We Own the Sky was glorious, and segued perfectly into Steve McQueen.  The young dude on guitar looked like he was living the ultimate rock star dream whenever he sang.  I was jealous.

I was surprised to see Skin of the Night on setlist.  Keep the studio version for your makeout sessions.

The LA Weekly did a more extensive review here (for all 4 of my friends who listen to M83). 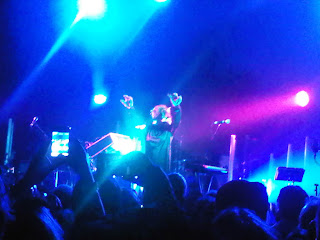 And this guy wants to sing with M83.  Hilarious.