Last week I got to hit not one, not two, but THREE shows.  Hallelujah!  Back to normal pre-Phoenix behavior.  Thank you bands, for actually stopping here and not just skipping Phoenix for LA or Vegas, or even Tucson.
Last Monday - We Are Scientists (one of those bands that their home country doesn't fully appreciate; they're much more loved in the UK).
Last Tuesday - The Hotel Cafe Tour (chick style)
I had been dying to see Meiko, who was great, but everyone else was equally impressive.  Laura Jansen especially (I always love the ones with the piano more than the ones with guitar).

Last Saturday - Weezer at the AZ State Fair
I sang "Say it Ain't SooooooAwhoaaawhoaaaa..." with all these people: 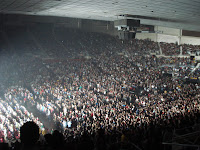 Rivers Cuomo is a strange little man, but so so entertaining.  I had to think back to the previous Weezer shows I've attended; one at Coachella and one in Spain where I almost died on the floor of the Plaza de Toros en Madrid because everyone rushed the arena to see Dover when Weezer had finished and there was only one exit and it was tiny and I was pushing to get out while thousands (okay, maybe hundreds) were pushing to get in and at one point my feet were off the floor and my shoulders pinned to the people around me and I almost hit the metal barriers on the side.
And then, possibly the most crowd participation I have seen, and the most entertaining -the Hootenanny revival.  He brought out 35 people with their own instruments to play along, ranging from trumpets to cellos, flutes, and even a didgeridoo.  The crowd chanted Hip Hip! when appropriate and all was well.