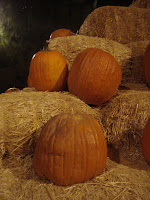 Time for fall, finally. It's still close to 90 degrees during the day, but when it's dark outside and you can't see the palm trees, the temp falls a little, and surrounding yourself with pumpkins helps you pretend it's fall.  A few of us made the trek (and I mean trek) out to Schnepf Farms over the weekend to participate in all sorts of fun.
We had some cornbread and chili, rode an old carousel (I felt really bad for the kid operating the ride.  He's the perfect angsty teenager type, and probably spends 30 minutes a day blow drying his locks into this forward facing style.  He's wearing the dorky Farm Staff t-shirt and once everyone is loaded on the ride, he pushes a button on an ancient boom box that's off to the side to play some creaky carousel music, over and over and over.  I hope he has an iPod).  We meandered through the pumpkin patches, watched the rickety roller coaster and sort of got lost in a corn maze that's supposed to look like Muhammad Ali from the air.   I don't think the maze was big enough to have been Ali but.... 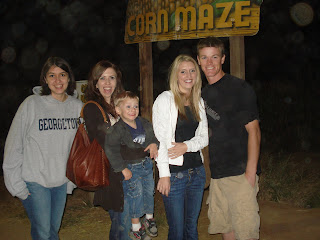 It was dark, but not really scary and we couldn't really have gotten lost.  Isn't that the point?  Good times though, worth a visit at least once. 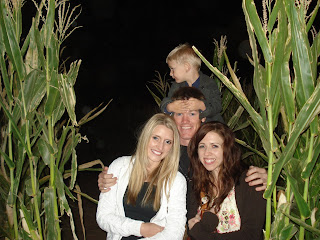 I spent the rest of the weekend trying to maintain the motivation for productivity that I felt this week.  That included cleaning the kitchen, finally hanging art and photos on my walls, cleaning out my entire closet, donating clothes, recycling magazines, and even taking a lint roller to the shower curtain.  That last one might have been taking it too far.....
- October 27, 2008