Day 3 - Sunday!
The day you almost dread, because it's the last one, because you're the most tired, because you tried to save money and didn't book a hotel room that night, counting on the fact that you'd be able to maybe leave early and drive the three hours to home.
Except The Cure was closing. And you don't skip The Cure.
Liz and I got up at a decent hour that morning, checked outta the hotel, packed and gassed up the car and hurried back to Indio to arrive at the beginning of Day 3. It's a long, long way from the parking lot to the music. First, you walk through the dirt lot. 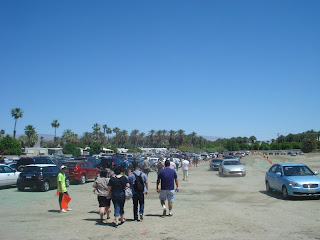 Then you walk down the dirt path. 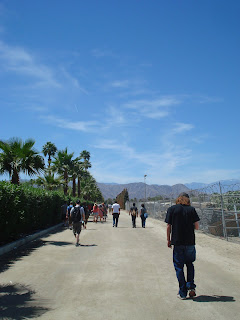 And you walk through the grass lot. 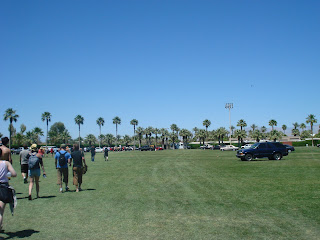 And then you walk through the dead grass field where the entrance lines start. And finally you get inside! 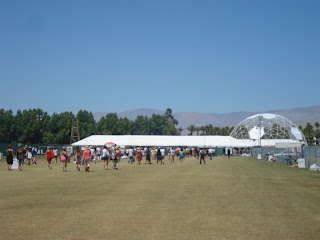 At this point you should know where my first stop is. Yes, yes, the Sahara dance tent to see Supermayer start it off with some green alien attacks. Kinda weird, but sometimes you get that with European electronica. 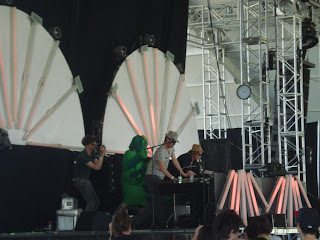 Next up was another of my must-see bands for the weekend. I came across their Paris track during my research and it quickly became the #1 most played song on my iPod. I hated that the Friendly Fires got scheduled for such a short set time, they were in the smallest tent at the very beginning of the day, and that it was so crowded. But Coachella knows a hot band when it's playing. I wish I had gotten more on video, so you can check mine, then check their actual video for the song. Why do I love skinny, pasty-skinned boys from the UK who sing and shake it on stage? Such a weakness. Also nominated for the Mercury Prize this year. Love them!

They've been scheduled at festivals all over the US all summer, must catch them again. And the 2nd chorus of this track with the extra cowbell = amazing.

The next few bands are a little fuzzy - I think we saw a bit of Okkervil River and then the Gaslight Anthem, who were a lot of fun. Okkervil's side project, Shearwater, is a recent new favorite of mine too....
Lupe Fiasco was on the main stage about this time, and I had to get a little hip hop in, then catch a bit of French semi-weirdo Sebastien Tellier, who I actually rather enjoyed. The French have quite a few powerhouses in music, M83, Phoenix, Daft Punk, etc. 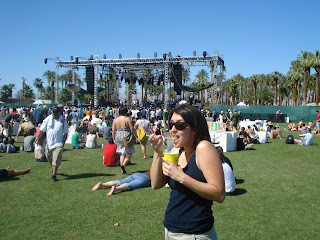 Next up at the hottest part of the day, Ms. Lykke Li - I think I'm a Little Bit in Love with her. Turns out I've had all the wrong stuff of hers - what she performed on stage was fantastic. She brought her A-game. And for some reason I've always pictured her all dark-haired and exotic looking, but no, she was every bit the Swedish blonde that you could expect. 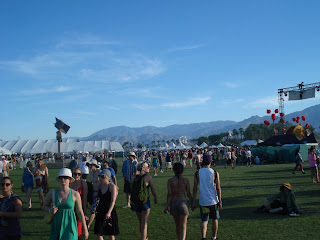 We meandered through Peter Bjorn and John on the main stage (though I don't recall hearing the whistle song) and the Yeah Yeah Yeahs (who I sometimes like but mostly feel indifference towards) and finally Liz and I laid on the grass at the Outdoor Stage, stared at the sky and listened to the beautiful haunting sound of Antony and the Johnsons. Definitely some different stuff there that I don't think I can listen to on a regular basis, but for that moment as dusk started to settle in, it was perfect. 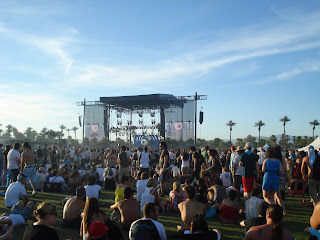 Back to the dance tent for Plump DJs, who got a top rating on my research scale of who to see. As the video I took reminds me, they were definitely good. 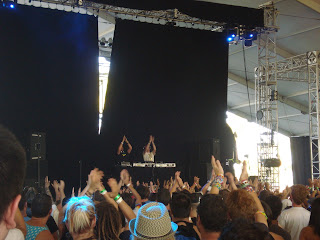 I think I saw a few minutes of The Horrors, but they scared me. And I was hungry and hot. Time to cool off in the dolab art installation, complete with some DJs breaking it down, dancing people and a handful of people perched on stands, holding water guns and spraying down the crowd. 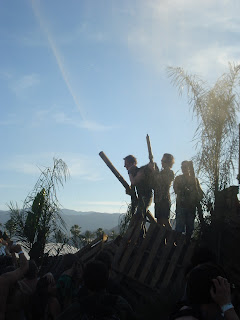 Liz and I grabbed some food, walked around looking for souvenirs and soaked up our last few minutes of free time, skipping Devendra Banhart and My Bloody Valentine. 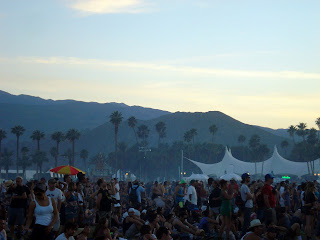 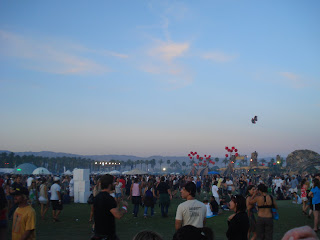 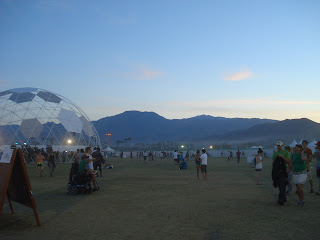 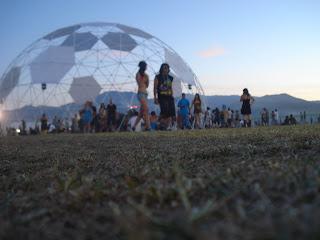 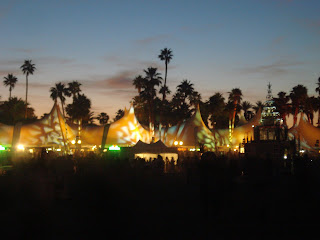 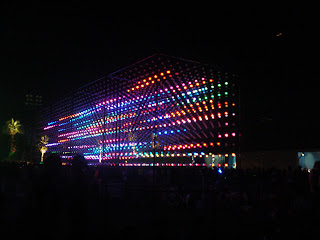 Alright, back to business with Christopher Lawrence, who was unknown to me until I began the research process. And he's now a new favorite. The tent was packed and everyone was into it. Watch the whole place just light up - I heart progressive trance. 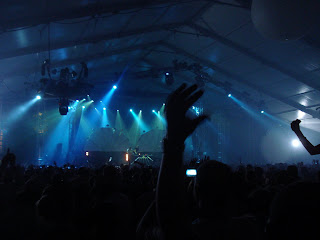 The last act I'd see in the Sahara tent - Groove Armada. Packed and awesome. They're always a classic and you've probaly heard more of their stuff than you realize. I was excited that they were there. The energy in that tent is impossible to describe - you've just gotta be there and be in that moment. It's like nothing else exists (even though there are 40,000 people still around the grounds watching 4 other stages of music at the same time). No one cares how awkward you may look - you just throw your hands up and move. It's impossible not to. Ridiculously fun. 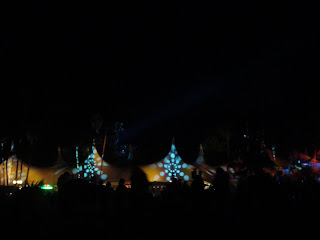 Finally - time for the festival closer. And no one more perfect than The Cure. They're a classic. Disintegration is one of my favorite albums ever, even though it came out when I was 8 years old and it took me more than a few years to find it. It was pretty late in the evening and I knew I had a 3 hour drive ahead + work on Monday morning but when they took the stage I was mesmerized.
Absolutely mesmerized.
I couldn't move. I couldn't take my eyes off them. There was no way I could just catch a couple songs then leave. Liz and I parked it towards the back of the crowd and settled in for the night.
When you're the closing band at the end of the day, much less the end of the entire festival, you gotta give people their money's worth. The Killers the night before had huge lights and fireworks and a grand presentation, a live Beatle had been on stage Friday night, I've seen crazy Bjork with dozens of dancers in costumes of all shapes and sizes, Rage Against the Machine reunite to a fanatical crowd. But Robert and company just did their thing with minimal distractions, and it was more than enough. The 90 minutes or so that I saw was incredibly memorable.
Finally at midnight I had to drag myself to the car, as they continued to play. And they played, and played, as lights got turned off, amps got shut down, and finally they were kicked off stage past curfew.
Coachella 2009 - you were simply amazing! Third time was truly the charm. Until next year!

The Cure - Pictures of You from L Dubbs on Vimeo.

The Cure - Lovesong from L Dubbs on Vimeo.

OK - all that winding down Camp-Is-Ending melancholy set in again.

Am I silly that I get homesick for Coachella sometimes. There was that much love there and it was that wonderful. The come over me like waves of nausea, like once a month. It was awesome,so invigorating. I think Barney would def give us a Legendary pass.

These posts have made me go back through all my old stuff. You sure put a lot of time into these. You're slightly amazing, you know that?

I couldn't have had a better Coachella. Ever. And you were the perfect compatriot.

I CAN'T wait till next year.

Gotta remember the bikes next year. Bikes and sundresses.