So Vegas is one of those things that I don't really understand.  I know lots of people who go, lots of times.  When you're not a drinker or gambler, I don't get what there is to do there.  Yes, there is shopping, and yes, there are shows, but who feels like dropping $100+ bucks to be entertained for 90 minutes on something that is likely to suck (unless you're Cirque du Soleil) ?  Lots of people do, just not me.  Food is good, but I also don't feel like spending that much $ on great food and all you can eat buffets don't do it for me either.

Vegas is close.  It's a regular weekend gig for Phoenix people.  Here's the story of my one and only trip.

C-squared and I took off one Friday afternoon in early December; he had some good friends who would be there for a conference, so we decided to meet up and spend the weekend. 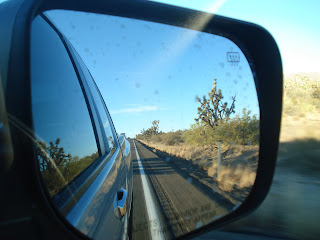 We took some lovely back highways to get up to the 40, before winding thru the Hoover Dam.  It looks like a Star Wars village.  The new bypass over the dam opened just a couple weeks ago, and I'd be tempted to go back just to see that.  Apparently it has the longest concrete arch in the Western Hemisphere and is the 2nd tallest bridge in the US. 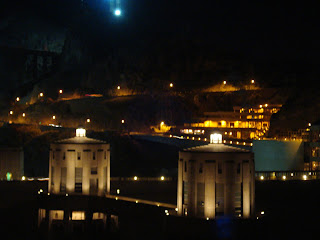 Here's the thing about me traveling - yes, I am very go-with-the-flow, but I am also a planner.  We had two nights there.  We had already determined that Saturday night would be the go-out-and-dance night since the rest of the gang wouldn't be in town til Saturday anyway and that's what they wanted to do.  I also knew I wanted to see the only show worth seeing (it's O, in case you didn't know), and Friday would be the only chance.  Clearly, it's popular, and since a certain someone wouldn't ever really tell me what he wanted to do so that I could get cheaper tix in advance, we just "figured it out when we get there."   By figure it out when we got there, I mean he took a nap and I went to the Bellagio by myself and bought last-minute really expensive tickets.  The show was amazing though, really, I'm glad I sucked it up and went. 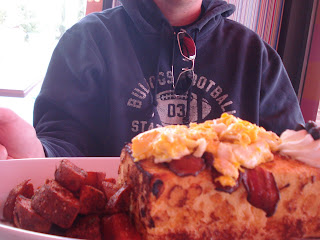 Saturday morning breakfast - an entire loaf of bread for french toast?  That was just his meal.  Yes, it's tasty, but it could also feed an entire Ethiopian village.  We spent most of the day in and out of hotels, exploring all the casinos and shops.  I can get behind Caeser's and the Bellagio - I think I'd wanna stay there if I ever go back. 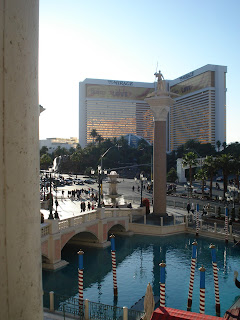 Saturday night was supposed to be the big night out for dancing - which I would love.  It's rare that I actually do it, so I was excited to be among people who actually had that on their itinerary.  I prepped with an early evening nap and got up at 9ish to get ready to go out.

Wouldn't you know that everyone got sick, took Nyquil at 8pm and went back to bed.....  As a girl, I didn't think it would be the best idea for me to go out to a club alone.  Nor did I care to venture through the incredibly smoky casinos for the rest of the night.  Saturday night, 10pm, WIDE awake, ready to party, and nowhere to go.  I think we ventured out for late night food, which wasn't all that great, and then went right back to bed.  I couldn't sleep and listened to some snoring while trying to watch SNL......

Sunday morning we caught some NFL in Caesar's (which was actually fun) before starting the drive home. 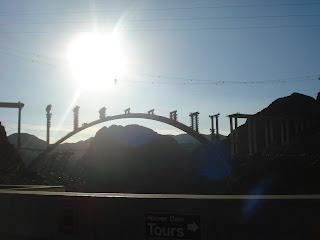