Despite any lack of love that I may have for Phoenix, it all seems to dissipate during the months of November through about February. Winter here is a cold-hater’s dream; though I do miss only getting to wear my favorite Spanish leather jacket about 5 times before it’s time to return it to the back of the closet. 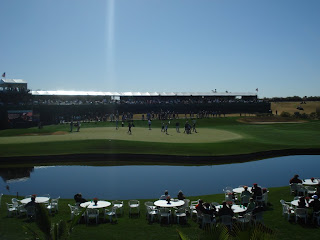 Whatever the name, it’s the rowdiest stop on the PGA tour.  If there’s one thing Scottsdale does well, it’s rowdy, which makes for a very fun day of people-watching, food and drink, and a little bit o’golf. 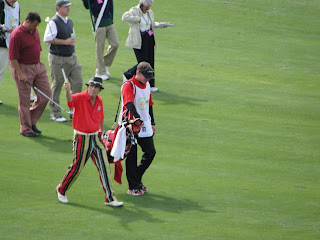 Work buddy and I usually figure out a way to score some corporate tickets (there are enough floating around) and take most of a Wednesday off to enjoy the Pro-Am. We park ourselves in the tents around the 16th-18th holes and enjoy some food and perfect weather. George Lopez and Alice Cooper are regular players, and the delicious Josh Duhamel is in attendance. This year I made a repeat appearance on Saturday to get up close and personal with Camilo, but I avoided the hyped-up Bird’s Nest after party. Amazing people-watching there though, AMAZING. In 2009 there were all sorts of Scottsdale cougars, frat-boys, go-go dancers of barely legal age and men of all ages hypnotized, a Zowie Bowie performance and lots of intoxication. 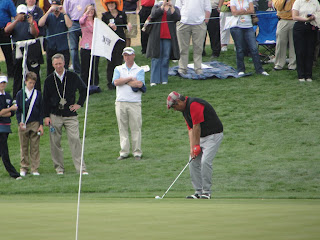 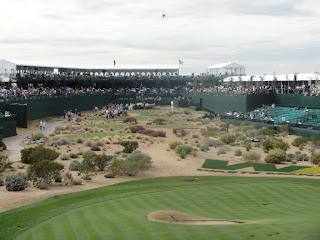 Another great part of the Open is that Melissa, my old college roommate, is in town from Boston to support one of her clients who has a big presence at the tournament. I get to take funny pictures at the Xerox booth, Mel and I have dinner and catch up on life, and we build a fire at Greasewood Flat and hope to find some cowboys. 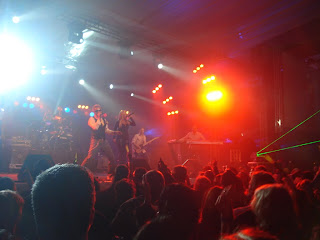 Another event that I ended up doing this winter was helping out at a book signing for Mitt Romney. After leaving DC, I have barely read a line about politics. I know I should probably care a little more, but eight years of being around people who live and breathe for that stuff (and I’m certainly glad that some people do ), I just let it happily fade away. That was not the part that interested me about living in DC, nor does it interest me much now.

Regardless, a friend of mine had worked on Mitt’s campaign and got asked to put together a group of volunteers to help out during Mitt’s Phoenix stop of the book tour. Our job was to interview people in line about “What Makes America Great?” using little Flip Cams and collect email addresses in return for a photo with Mitt while he signed their books. Of course the book store had their own set of rules for people to follow (colored wrist bands and book purchase lines and all that), but since our group was actually wearing Mitt T-shirts, everyone thought we were in charge and we were not. It was a little confusing and there were some displeased book store employees, but hey – whatever. 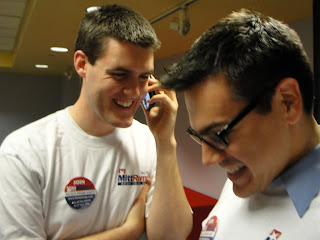 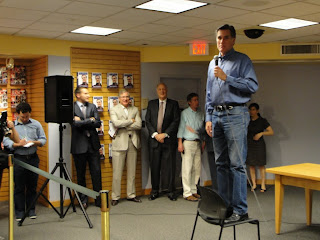 Mitt spoke and signed away and then when all was said and done we got to meet him and chat for a few minutes. I think that my mom made me buy about eight books for him to sign. And then the race was on back at my house (post dinner and free cheesecake, courtesy of Mr. Maughan, the organizer) to upload all these photos and videos to the official Mitt website. That took for-ev-er, until 1 or 2am, maybe? And this was on a week night, though totally fun and a good reminder of the DC political energy that maybe I do sort of miss. Here’s to your next campaign, Mr. Romney! 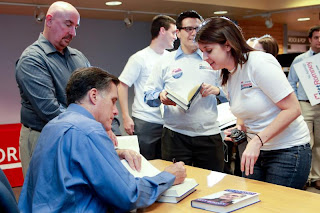 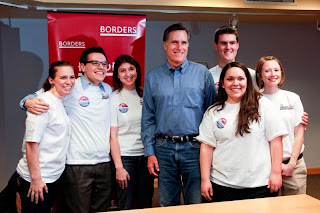