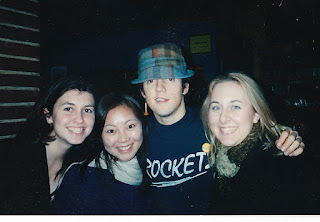 He played a tiny club in VA where they don't sell advanced tickets.  I froze in a very long line (not yet realizing he was about to be the next big thing), but Jason came outside, we said hello, and eventually I got in to catch the last half hour.  He's still one of the best performers I've ever seen. He'll always have a place in my playlists.

I think that was the night that we rode home with strangers in a truck (the subway was closed, it was freezing, and there were 3 of us - totally safe, right?).  They were country boys, which was an unusual sight in suburban DC.  I also think there were comments the next day on message boards about the girl who stood in line outside with her ear pressed to the glass during the show.  That would've been me.

In any case, Mraz is back, after too long of an absence.