Today marks Day 18! I'm over the halfway point and on the downward slope. I don't know that this has been magical yet, but this part of the timeline was pretty correct.

I love my Sunday naps, but I didn't take one this week. Instead I hiked, and even at midnight I felt like I had a good few more hours in me. Energy! Also, all I wanted was a donut. So, so badly. I've been looking at donuts on the internet and dreaming of the day I can bake again. Maybe this will pass? 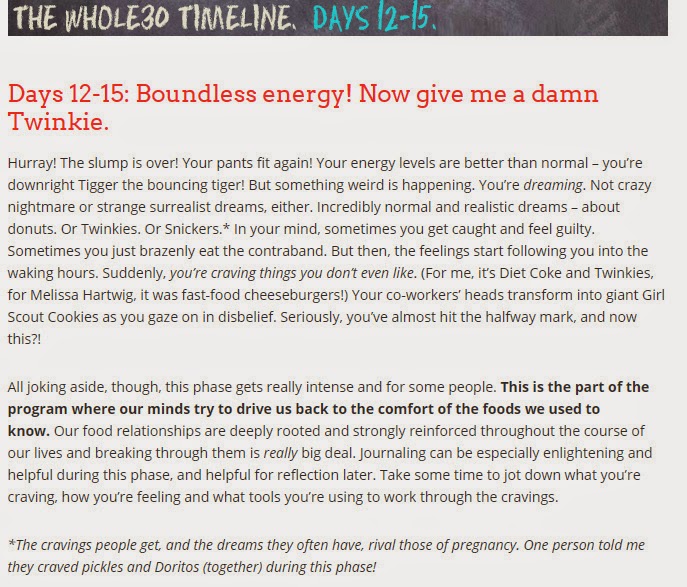 The good so far:
I do feel a change in energy.
I am sleeping well.
I don't feel the need to snack between meal (unless I  eat a small meal), and I don't feel that crash in the middle of the day. Body is shifting from burning off those sugars and carbs into burning fat!
The lime cilantro ranch dressing I made is SO good.

The bad:
A few recipes I've tried have pretty much sucked. I love soup, but these weren't good.
I've ended up eating the same thing over and over (stuffed bell beppers or zucchini noodles) cause I'm tired of trying new stuff.
So sick of cooking and doing dishes and always having to think really hard about what I eat. Plan, plan, plan, cause you can't buy just anything off the shelf when you're hunger.

A few challenges that weren't so bad:
The first day of the program I had a team work lunch at an Asian place and I couldn't eat a single thing on the menu. They didn't even have a salad I could pick around. Not too fun to sip water while 10 other people eat.

One night I put some stuff in the crockpot to make a lunch for the next day, and leftovers to take to my cousin's wedding, since I wouldn't have time to come home. Well, the crockpot didn't turn on. I scrambled for leftovers for lunch, but had nothing to take with me for dinner.  Ended up in a small town grocery store where I could round up some almonds, olives, guacamole, and maybe some dried fruit. Not the best dinner, but I stayed on plan.

Nov 5 - I'll be back to normal. Also the same day as a huge meeting at work that I'm in charge of.  Eeeeek!  Not sure how I'll want to eat when it's over. Will I be scared of sugar? Though I don't think staying off of it forever is realistic for me. We'll see what happens.