A little late in reporting, but whatever :)

Caro wanted to go to NYC for a smashing birthday weekend, so the ladies of 314 + Robin + a couple other kids made the trek up north on St. Patty's Day.

First obstacle - surviving the bus trip. The bus left at 2:30, and I had hoped to be there by at least 2. Not the case. Neither Robin nor Caroline got there early, and we skitted in right before the bus left. Not many seats left either, and since people were moving around, we couldn't figure out where to sit. The bus driver was a little cranky (as they usually are), and he yelled at us to sit down somewhere. A couple people got on after us, even though there didn't seem to be anymore room. Some Russian chick had gone off to get food, and by the time she came back the driver had given away her seat. He told her she'd have to take the next bus, and she started throwing a fit, of course. I'd be pissed too, but when you get a seat in these situations, you'd better stay parked to keep it. He took off to the next pick up point in DC, all the while yelling through traffic that she was going to have to get off when he stopped again. It started to get nasty (I had a front row seat to the drama), so finally the driver announced that if someone would give up their seat for this girl, he'd get them a free round trip on the next bus that left in an hour. Some girl was gracious enough to volunteer, and I thought that'd be the end of yelling Russian girl's tantrum. Not exactly.

I can hear her towards the back on her cell phone, calling the bus company to complain. Hello - you got a seat - can you be quiet now? Somewhere between DC and Baltimore she came up to the front to ask the driver his name. Now, Famous Tony had already announced his name and that he'd been a driver for 12 years. Every knows the Famous Tony. Not good enough for Russian girl. She wanted his family name. "In my country, Famous Tony is not a name. What is your family name?" She seriously yelled at him for about 10 minutes. Tony's rage finally erupted after asking her to sit down several times, and he swerved through 3 lanes of traffic, pulled off the road and called 911 to have her taken off the bus. Whoa!

Some guy from the back came up to calm Tony down, and made Russian chick sit down and shut up. He was a pretty good negotiator, and before the police got there we were on our way to NYC. I noticed Russian chick stayed in her seat during the pit stop in NJ. Hah.

Caro had booked a hostel for us in NYC. I've slept in plenty of them across Europe, I'm not too picky, just need a place to crash for a few hours. Well, um, hostels in Europe do not = hostels in America. I had checked it out online after she booked it, and it didn't seem bad at all. When we arrived, the lobby area was pretty cool, with a coffee shop/cafe, wireless internet and lots of foreign men. So far, so good. Until we got to the room. 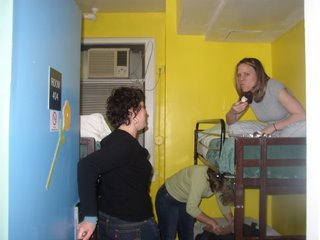 It was a box. Four people in a box. We all had to enter the room completely to be able to shut the door. We couldn't do anything but laugh. There was so much static in my sheets that I kept getting shocked on the metal bed. It was drafty and freezing. The bathroom smelled like my elementary school gym - gross. I guess when you usually stay at the Westin Times Square, this was a wake-up call. Sigh. I've learned my lesson. 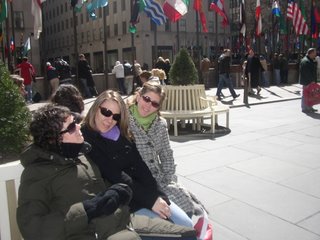 Despite the extreme cold, we had a good weekend. Friday night we ate at John's pizzeria, which has become my NYC staple. I must go there every trip. Saturday was shop til you drop. How many Banana Republics can you hit in one day? :)

We also dropped in to Tiffany and Co. on 5th Ave. I'm not a jewelry girl at all, but I followed everyone else for the obligatory homage. We wandered through silver, and pearls and housewares. Whatever, nice and all, but so unnecessary. But then....then....the engagement ring floor. And man, do those diamonds sparkle. Gorgeous. I could maybe deal with one of those, just maybe. I don't think I'd mind at all.....

Saturday night I met up with Josh (who had just been at my house a couple days earlier) and Scott, another friend from high school (who I had a little crush on when I was 15, just FYI. Wow, that was 11 years ago). It was random that all these Poteau people were in NYC together, but I love it. We had some dinner at a cool place on 8th and spent the evening gossiping away, of course. 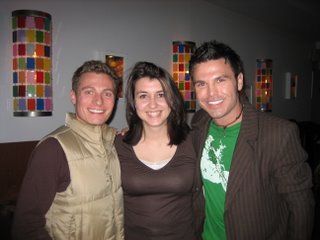 After dinner I met back up with the gang at some house party in midtown, some friend of a friend of a friend. It was a Mormon party, nonetheless, and a very awesome one at that. Even though I didn't know a soul, people talked to me right away. Super friendly group, unlike most of the parties here. Seems like a tight-knit group as well, and many of us went to a club in lower Manhattan that night. Sucked that the line was too long and we were freezing our lil' buns off. We called it a night before we got in.

Sunday morning we walked through Central Park on the way to the Met, found some yummy brunch, checked out of the box hostel, and went to church. We showed up late at the church building in our grunge clothes, and we ran into some classroom to quickly change. Would've been real scary if someone had walked in on us, but I think we were beyond the point of caring. Church was really good there - great group of people. Made me tempted to move there....even if just for the congregation....... 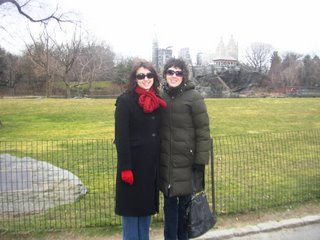 Aww, I just saw this pic of you and the boys. It's the cutest!!!