Don't Stop 'til You Get Enough

It's been party time for the last two weekends, pretty much celebrating Niki's birthday for a whole week. Can I say I'm birthday'd-out? Nah, not really, but throwing a party kinda tires me out, even though I didn't do much this time around. I definitely don't need any more sugar and junk food!

We started the festivities with a Hungarian dinner last Friday night, followed by French Kicks and Ladytron at the 930. The show was definitely....um, interesting. Well, not the show so much as the crowd. I was really looking forward to the FK, as I saw them about a year ago and loved them. They have a new album coming out this summer, and all the new stuff they played was fantastic. Tim remarked right away that he knew why I liked them, after taking one look at the lead singer. "He's so your type," he said. "Not the good for you type, the bad for you type...." Hah! Maybe so, but the music still rocked. Too bad they apparently didn't soundcheck; lots of feedback and unbalanced instruments. Shame.

I was doing okay up to this point. Crowd was a little weird, but okay. Then Ladytron came out. I didn't know a lot of their stuff, but I'd liked what I'd heard before. I guess the crowd freaked me out a bit. When there are boys there prettier than me, wearing really small tank tops....yeah..... I was up towards the front, but got pushed around by some fanactical people. Too much claustraphobia - I had to get outta there. Maybe I'll get a wig now though?

Saturday was a beautiful day. I dropped into Target and managed to stay on budget. Got a new blow dryer to replace the one that was about to blow up. Smoke smells when I turned it on - not a good thing. That would've been cool to watch, but I'm slightly scared of fire. Anyone else want to play with it? Jorge and I caught Thank You for Smoking, which is pretty entertaining. Check it out if you haven't already. Then I hit Gtown campus and caught up with Rob. The flowers are absolutely beautiful on campus. There's these dark purple tulips everywhere. I must get back there with my camera (or a shovel to dig some up and bring them back to my house).

Fast forward through the week to this weekend. Friday night I went to a "slumber party" held by some girls from church. A lot of us don't know each, and some people have attempted to remedy that by hosting small social gatherings. Our congregation is super transient, lots of students, interns, nannies, and it's really hard to get to know anyone. My roommates and I always complain about it, especially since most people live in Rockville, and we never want to travel that far to hang out. I, however, decided that I'd be dutiful and attempt to meet some people. I'm glad I went, though I'd didn't stay for the slumber part. Something about the need to sleep in my own bed.

Rain, rain, go away, though you kept me in my bed all Saturday. When I finally left my room around noon, I had a full day of cleaning and party prep ahead for this: 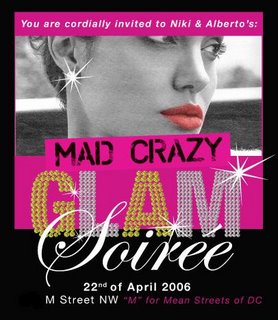 We kept the food more low-key this time (since last time we went crazy and no one ended up eating it. We had leftovers for about 3 weeks. Ewh.). The rain kept a lot of people away, so it was a smallish gathering, but Niki and Albie had a proper birthday celebration with some super-rich chocolate cake. I crashed around 1am and got more sleep than the rest of the house, but I still left church early today to nap. Oops.....

If you're still reading, I've updated the current music selections. Yum on the Coldplay remix. I played DJ for the party, carefully selecting the mix in perfect flowing order. That song should've been in there multiple times, but I restrained myself.
- April 23, 2006