Sitting in my patio chair on the balcony; finally an evening where it's not too cold to be outside sans heat lamp.  I guess AZ isn't so bad this time of year.

Back to the updates....cause I care to document then.

I had(ve) a goal to visit each continent and had hoped to do so by the time I turned _0.  Except Antarctica, because it's cold there, though this story and photos make me want to change my mind.  South America is the only one that eludes me, which surprises everyone since I used to be fluent in Spanish, and it only seems natural that I would go there.  Alas, I haven't been and despite my brother serving a mission in Argentina, I couldn't convince the family to go pick him up, so I was more than tempted to just take off there alone in August or September, just to meet my goal.  After a lengthly internal debate, and deciding it'd be no fun to turn a decade older alone, far from home, I decided to do the next best thing - go back to the East Coast.  It'd been 2.5 years, and flights were a ridiculous $77 each way on American Airlines.  Purchase, please!

At the end of September I set off for a week and a half trip back to DC and NYC, splitting my time pretty equally among the two cities.  I feel ridiculous that my lovely hostess and dear friend Alysia and I never even took a picture together, but after years of not seeing each other, she greeted me with open arms at IAD.  Some things never change - I will never enjoy that airport and I will always love seeing her.

After a grocery run to the HT (I still laugh when I say the name), beginning long stories of life updates, and setting up an air mattress larger than her living room, it was time for sleep.  The next morning was go time - I still feel like I didn't have enough time to see everyone I'd hope to see.

First stop, lunch at the old job!  Thankfully Leash loaned me her car, as it was raining and I don't know how to dress/walk/be in rain anymore.  Several members of the original NGS Sorority Pledge Class of 2006 were still around, and we had a good lunch at the ever famous cafeteria.  No really, other downtown workers always wanted to sneak in cause it's that good (and cheap). 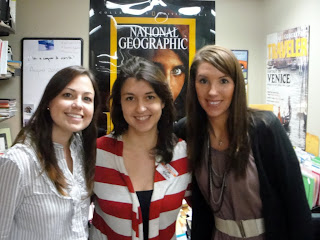 After lunch I drove back out to VA to see if I could catch one of my favorite families ever at home.  They've been traipsing the globe for the last several years, living in Uzbekistan and the Maldives, and are now mostly settled back in DC.  It's weird when your friends have children, and you see these little mini-mes running around.  These girls are the funnest and funniest, and I had some good laughs that afternoon. 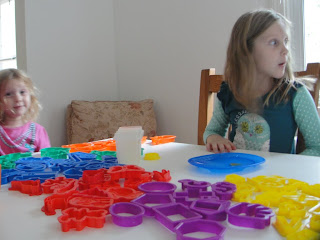 Friday morning I headed downtown to catch the Bolt Bus to NYC.  I'd heard it was improved service after dealing with the sketch Chinatown rides for years, and perhaps it was.  At least there was a boarding number, some semblance of a line and fairness to get on. I paid $20 on the way and was lucky enough to get the $1 return.  Can't beat that. 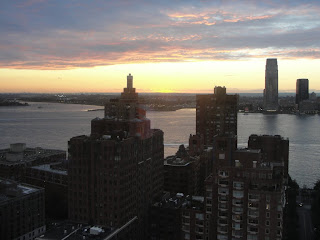 It just so happened that one of my DC besties (I can't help but say that word) had been in NYC on a work assignment for several weeks, and we were able to keep his hotel room through the weekend.  No, he didn't bill it out to a client, but it was convenient that he already had a place and a sweet government rate.

The main reason I chose to go to NYC this particular weekend was the happening of a Tired Pony show - a superband put together by Gary Lightbody, lead singer of Snow Patrol.  They released an album in the UK over the summer (which I had delivered to me via Amazon UK, since I didn't want to wait til the US release a few months later).  A mixed member band of this caliber really can't tour - so they did 3 shows.  One in London, one in NYC, one in LA.  I was determined to be at one of them.  Tickets were 20 bucks to the show, 200 roundtrip airfare, and it was more than worth it.  I got lucky that so many details fell perfectly into place. 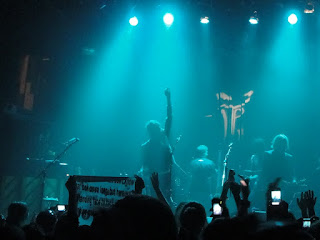 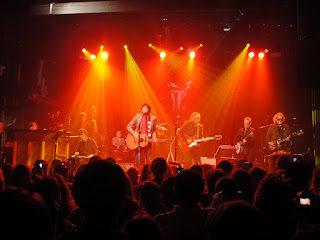 Irving Plaza is perfectly located, perfectly sized and beautiful.  You can watch a replay of the Tired Pony London show here.  A new song debuts at minute 17:50 or so; it's a favorite and should be on their next album.  I want to play the typewriter or chimes for them. 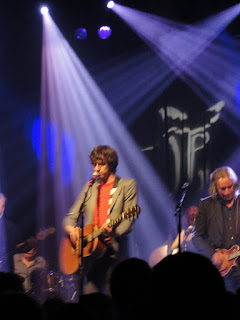 My love for Gary Lightbody runs deep.  I love his song writing and bodily twitches when he performs.  And even though I don't love every song that came out of this particular side project, the concert experience is one I won't soon forget.  With Peter Buck in the band, Marketa Irglova from Swell Season singing backup along with Lisa Hannigan (swoon) and Rosi Golan, and then you pull Michael Stipe on stage for a guest vocal, yeah. 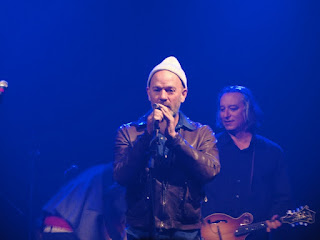 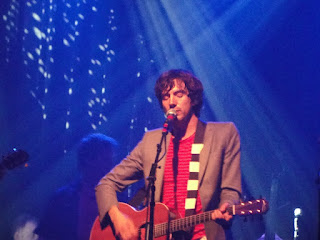 My birthday celebration keep getting better and better, and I'm only two days into the trip!  Friday night NYC love started right.  Saturday morning we got up, but not too early, and headed out on a day of adventure.  Hard to believe what Ground Zero looks like these days.  I'd watch the progress from my office over the next few days. 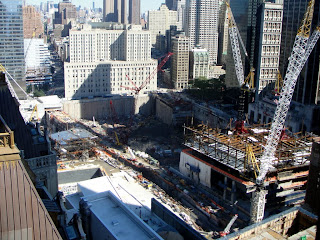 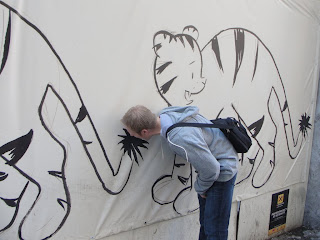 First stop, the Guggenheim.  For the first time ever I decided to actually do the audio tour, since it was included in the admission price, and I finally realized what I've been missing!  Usually I just kind of wander through museums and am ready to leave after 45 minutes or so.  Not so this time.  Or maybe the exhibition was particularly interesting to me - Chaos and Classicism - after the horrors of World War I, the shift away from abstract Cubism and such back to classic themes. 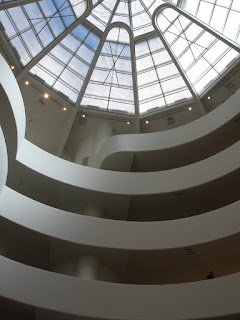 After meandering the UES, buying photographs from street vendors and having linner, Christian and I split up, and I completed the walk down to Times Square and had dinner with my favorite fun-size Japanese roommate at one of my favorite pizza joints. 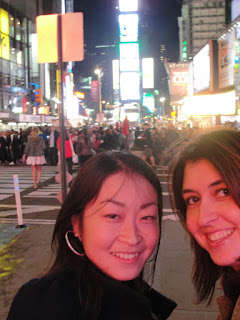 Yes, it's overrun with tourists, but you can't help really feeling like you're in New York when you're standing in the middle of it all. 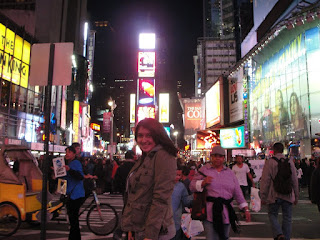 After dinner I hightailed it out to Brooklyn for concert number two of the weekend, Foals.  As soon as you're on the L train, you know you're headed to the hipster enclave of America.  It's grown on me, actually.  I met up with Ari, former Phoenix resident, we grabbed some ice cream then headed to the hipster haven of the Williamsburg Hall of Music. 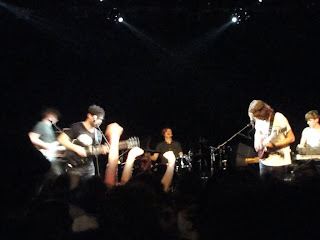 It was the second night of Foals in Brooklyn, and I was ready to dance.  By the end, people were on stage and there was madness everywhere.  I think Ari even liked it. 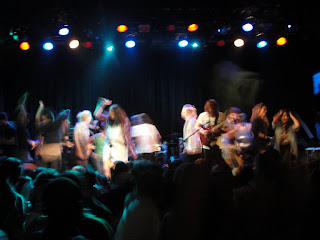 On Sunday morning I checked out of our sweet hotel, headed to Grand Central and caught a train to Connecticut to see one of my best Georgetown friends and her two munchkins.  As much as children kind of freak me out, I knew I would love Crystal's when I finally got to meet them.  And sure enough, they are both darlings. 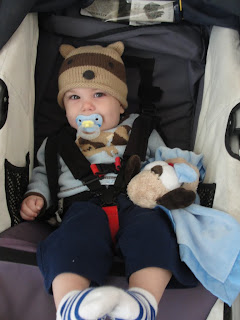 They recently moved from North Carolina to New York, and while it's been a bit of an adjustment, they live near a beach!  It was a fairly nice day so we loaded up strollers and spent the afternoon hanging out near the water. 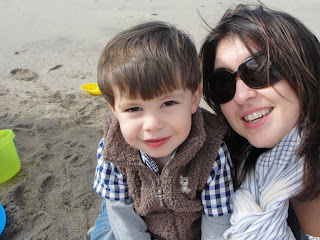 It's been way too long since Crystal and I saw each other, so I loved that we were able to spend the day together, even if it was low key and filled with the Backyardigans.  It's a nice change of pace. 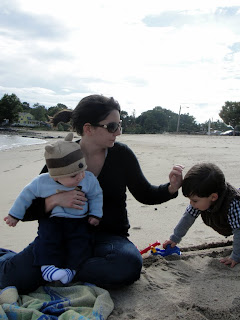 I really hope to be back that way soon, and I'd love to keep playing Auntie Lauren. 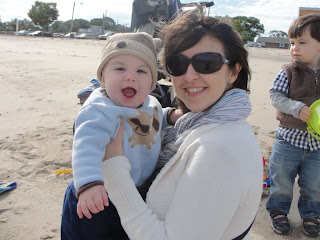 Monday - back to real life for a bit!  On of the nice things about my job is having offices scattered around the globe and the ability to work from almost anywhere.  Conveniently, my friend Jason lives near our office in the Financial District and I stayed with him for a couple nights so I could walk to work. 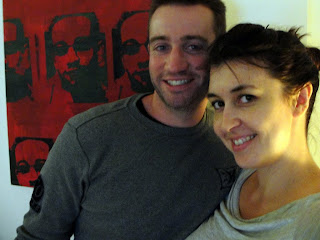 I spent Monday and Tuesday working while staring out a window at the Statue of Liberty, and had lunches with some people I don't see often.  It was cold and rainy and I wasn't prepared!  Good thing there were shops downstairs in the lobby so I could buy some warm clothes for my walk home.

Monday night date with Scott, a friend from high school, who's now an actor (with a day job) in NYC.  We've been seeing each other on east coast trips for years now, since I moved to DC just one year before he moved to NYC.  Tradition continued at Shake Shack, though sadly indoors since it was cold and rainy. 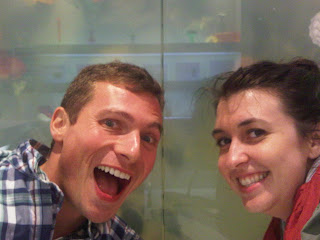 Tuesday night I hung out with Bryndee at the delicious Westville, in the fantastic East Village, where one sacrifices living space for location.  I still debate if I want to go back to that, but this trip had me inspired to say yes!  And thanks to the magic of Facebook, I got a note from my friend Mark, who's currently living in Queens, and he said he'd be over to see me since I was around his part of town.  He drove across the bridge, met us for hot chocolate and we ended the night at a random pub with banoffee pie for dessert.  Not bad for a Tuesday! 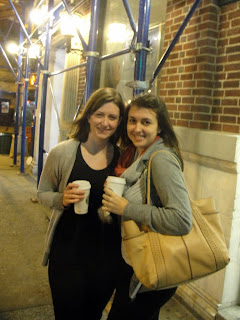 2 seconds before i read this, my coworker showed me a Foals music video. I'm determined to check out this tired pony business. Holla rosi golan!

it makes me so happy that you met up with bryndee.

it makes me so jealous that you went to the tired pony show.