How could you not love these sweet little faces below?

I still do, even after filling in as a helper parent for several days last week and being totally unsure about what I needed to do most of the time.  Thanks, Erin, for putting up with my ineptitude!  I think I'll need a pretty good partner in crime before I decide to have my own. 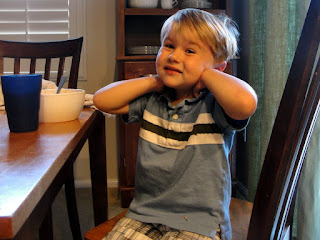 See - I'm never, ever around children.  I never babysat as a teenager for extra money.  Sure, I helped with my own two brothers, but anything to do with anyone else's offspring, no thanks.   I never interacted with children while in college/living in downtown DC.  I don't see them (or anyone, really) now that I work from home.  I don't have nieces or nephews.  I don't see kids at church because I attend a congregation of single people.  I just don't really know what to do with them.  My child confidence is pretty low, especially when they're at an age where I have to guess what they want/need.  Oh, and I haven't changed a diaper in probably 20 years.

Except Erin and Todd have my favorite children, ones that I like to visit and have fairly frequently since I moved to AZ/CA.  And with their third baby arriving just days before Todd had to go out of town for two weeks to start grad school, I volunteered to go hang out at their house for a few days and see what I could do to help.   Oh boy. 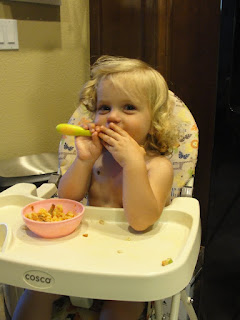 I got there on Wednesday evening, just as the two oldest kids had gone to bed (who knew that some kids go to bed at like 645pm?  Not me).  I hopped on Erin's bed to chat and catch up, and ten minutes in she says, "you realize the baby's right behind you, right?"  Um....nope. Tiny swaddled ten-day-old infant laying right behind me and I don't even notice.  Whoops!

The plan was for me to get up in the mornings with the two oldest kids (J's 4, and Miss B is 18 months old) and keep them occupied for awhile so that Erin could try and sleep or feed the baby.  Except Miss B's been getting up around 5am, and they let her yell until 6 when they'll go in and get her.  Sleeping habits are tough to establish, I hear.  Good thing I've had 6am work calls over the last two weeks so that I was in the habit of getting up (ugh, so not a morning person.  Living on the west coast is sometimes not an advantage in that regard). 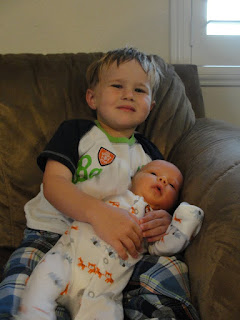 Sure enough, 6am rolls around and it's time for Miss B to get out of her crib.  Good thing she's the couch potato of the family, so Curious George or Little Mermaid is usually enough to keep her occupied.  The first day I tried to help with a diaper change - does Mickey Mouse go in the front or the back?  I had to ask.  But I couldn't ask her, because she just grunts.

Little J would get up around 7 and join us for some TV and breakfast.  By the third morning I'd kinda figured out what they like to eat and how they like to eat it.  Do I need to chop their food up?  Do they use forks?  If they ask for a cookie, how do I make them eat something else?  Miss B climbs up into her high chair like a monkey when she's hungry, and climbs down as well.  Is she going to fall and hurt herself?  Can I let her do that?  Yes, yes, I can let her do that.

When I felt it should be about noon, I'd look at the clock and realize it was only 930am.  Time goes by way slower when you're up at 6.  Those early bed times are kind of great.

I was a little nervous about my grocery store run.  Newborn diapers and a specific kind of pacifier?  Eek.  I honestly don't think I've ever walked down the baby aisle at the store.  But I was successful. 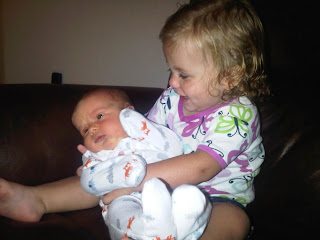 We did a few outings to the park.  I took Miss B and Little J one afternoon by myself.  Once again, can I really let Miss B climb all over the stuff like a spider monkey?   Yep.  She is fearless and determined and will do anything that the big kids are doing.  Little J was insistent that he was tired, couldn't walk home, and proceeded to throw himself on the ground, but between piggyback rides and two kids in on one stroller, we got home.

The next day we took all the kids to the park.  Three carseats = two cars.  We met Erin's sisters + spouses and their kids on the playground, and as I walked up I noticed all the kids running around together and all the parents sitting in a line, under the shady trees.  That's the life to look forward to, eh?

Little J and Miss B really love their baby brother and almost anytime the baby cried, Little J would say, "he's probably crying because he wants to see me.  And he loves me more than he loves Miss B."  He is a super sweet kid and we talked about how I knew him and his parents when he was a little baby and couldn't move or do anything, just like his baby brother.  And he said he'd probably invite me to his 5th birthday party. Score.

Little J is still learning how to stay in his own bed all night, and while he does pretty well most of the time, Friday night was a meltdown.  He got up at 10 and ran into his mom's room screaming.  She ushered him back in (I swear I would've done something if I knew what to do) and told him he had to stay there and calm himself down or he'd be locked in.  I guess this is a necessary tactic.  Well, he could not calm himself down and yelled that, so guess what - door's locked.  He was offered the - let's say a prayer and calm down option - but he didn't want that either.  So the door's locked and for ten minutes or so (maybe not that long, I dunno) he's banging on the door and yelling, "I need a prayer!  I need a praaaay-eeeer!"  I was totally about to crack up, though it wasn't really funny at the time, since he woke up the baby.  But I'll never forget his funny cries. 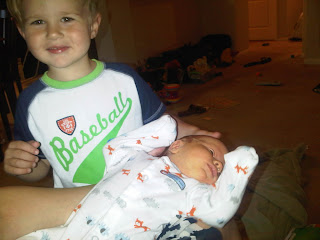 On Sunday I decided I could take Little J to primary so he could get out of the house for a bit and see some of his friends.  He had other ideas, which included staying home all day and watching shows.  This was not an option, so Erin looked at me, said thanks, and I picked up a grouchy, wailing kid and hiked him to the car in heels.  I barely get him in his carseat (another thing I had to learn how to do, along with pushing a double stroller) and he's wailing and hungry and thirsty and throwing up all kinds of excuses the whole drive.  I really didn't know if I was going to give into this kid or keep going.  I parked at the church, found him a granola bar, and went to get him out of the car.  Smart kid's thrown his foot over the lock so I can't open the door.  Ummm.....

We started negotiating.  He was thirsty, I offered the water fountain inside.  He wanted milk, I said I'd go look for some inside.  He said they don't have milk in the church, but I convinced him that I could look around.  Finally, I got him to take his foot off the lock.  Took a bit longer to actually get into the primary room, seated, and with his class, but his teachers took over.  Whew.

The baby was the super easy and sweet part of the trip, and I really think he got cuter every day.  I always forget how little they are; he's really tiny.  And thankfully not a random crier.

Erin, like you said when I left, I'll see you again in about 5 years. 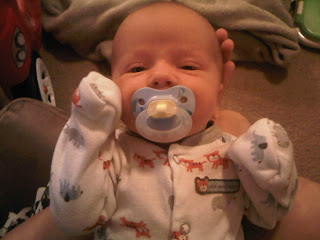 the kids miss you! but i feel much less guilty making todd get up with them in the mornings than making you do it.

I will get caught up on this blog! I am almost caught up and current! I did start solid blogging in March of this year, so I'll do a lit...