Time for weekend update.
Friday - my new beautiful laptop came in the mail. When I checked the tracking, it was scheduled to arrive on Monday. However, the UPS man got some bonus points when he delivered Friday am. Since I was armed with so much stuff to carry, I called and asked B if he could come pick me up at work before we headed to Coldplay. I felt bad asking since it was in the opposite direction, but he kindly obliged. That was before he knew how bad traffic was. From Alexandria to Silver Spring, it took 1.75 hours. At 3:30 in the afternoon. Ridiculous. Then we had to hop back on the Beltway to get to Nissan. Never ever again will I go to Nissan. Thankfully we got there right at 7:30 before Rilo Kiley took the stage. I dug some of their lyrics. I’ve been meaning to look them up. Reminder to myself - Look up Rilo Kiley lyrics... 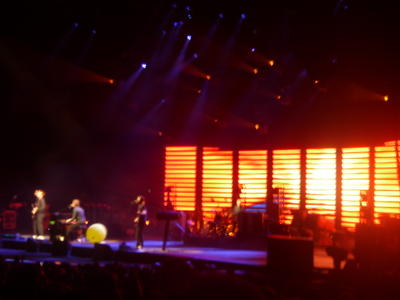 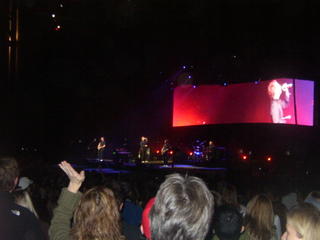 Next up, the band themselves. Guy Berryman and company. Okay, okay, so Chris is the focal point with his hop-on-one-leg dancing. But Guy’s the sexy bass player. I love them all - they are truly phenomenal together. Great show. Nice mix of all albums. Very worth the drive. At least for me anyway. B might be another story.

Getting out of the Nissan parking lot is another story in itself. Took us half an hour and several walks through the parking lot before we found the car. Finally traffic subsided a bit and we got out of the there.

Saturday I fed my Lost addiction. What I am going to do when I finish the first season and have to wait a week (or more - gasp!) For the next episode? We’re already going to plan a season finale party at work. We’re a bunch of Lost junkies. I just finished Disc 5 tonight. One more to go and I’ll be caught up. I hear the season finale is mouth-opening. Bring it on baby.

I hit up the Nationals/Phillies game on Saturday afternoon with Mark, whom I haven’t seen in several months. The season has come to an end. DC finally has baseball. How long with the newness last? Will the city be just as excited in 3 years? We’ll see what happens. As long as the free tickets keep floating around, count me in :-)

I rushed to the Georgetown waterfront to meet up with friends on Saturday night to see the ‘Tornado of Fireworks’ as part of the Chinese festival of the Kennedy Center. I guess I expected a little more, since I am from tornado alley. I didn’t see any spinning......it was pretty cool though. Even funnier, it caused a flurry of 911 calls around the city. Hah. We can’t do anything in this city anymore without people thinking the worst. What are we coming to?

Sunday was Gen Con. As usual, the roomies and I went to Robin’s to watch and hold a mini feast. I managed to stay awake through both sessions, despite people nodding off around me.
- October 04, 2005

You were well worth the drive. The concert was just a nice bonus.