I've had a deep love for the 930 club ever since I moved to Washington, almost 7 years ago. I remember my first show there (Fleming and John, Train & Ben Folds Five), and I've been to countless shows since. I was so grateful at that point in life to get out of Podunk, Middle America, and get to a place where I could actually see a band that wasn't countrified. Not too many of my favorites made tour stops at the Leflore county fair.....

PE and I braved the mostly high school crowd on Thursday night to see the Damnwells (so-so), Cary Brothers (good, but mellow), and the Fray (lots of pop fun). Every girl there was decked out in Uggs, jeans and tiny shirt, grabbing onto all the guys in their polo shirts underneath a vintage tee and blazer. The way they were fake smiling and snapping photos, I thought it was the first night of Spring Break in Cancun. BFFs forever! We finally found a spot that was mostly teen and camera-free, thank goodness.

Just after the Fray went on, I was standing directly in line with the balcony that overlooks the stage. I saw a couple men up there in suits, very overdressed for the occasion, but hey, this is Washington. Just behind them I saw about 1/3 of a girl's face that happened to look very familiar. Could it be? No....but yes! She's from Denver, the band was from Denver; indeed it was the fantastic Charity Sunshine! There, up in the balcony, the place I've longed to stand for almost 7 long years! 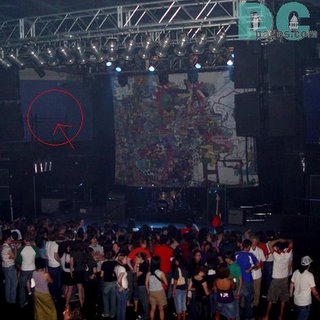 I quickly sent her a text message, convinced that she wouldn't even notice it til the next day. Within seconds of hitting the send button, I noticed her jumping around the balcony, looking over for me. I hadn't seen the girl in months, but there she was. Needless to say, I made it to the balcony, fulfilling a long-time dream.

I can't believe it took me this long to get up there; I did work for a radio station at one point, had friends who worked for radio stations and record labels, and I've even known some bands passing through. I've gotten to do all sorts of fun backstage stuff before at the 930 club, except for stand on that balcony. Finally!