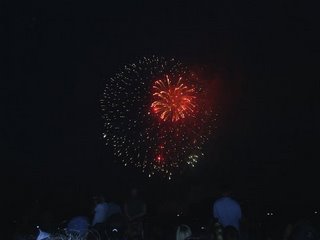 Totally generic title, but I'm not in a creative mood at the moment. It's past my bedtime, but I'm not sleepy. Not good when you have an early morning meeting...

Anyway, the 4th of July was actually pretty perfect. The roommates and I + Javi + Shawn braved the mass Mormon breakfast party at the bishop's house, which turned out to be really fun. It was a trek out to Potomac, but well worth it. I actually got to talk to people that I don't usually see when we're in the swarm of 300 on Sunday. Plus there was a pool, tennis, b-ball, soccer, baseball, volleyball..... and lots of bacon! Mmm....bacon..... We stayed out there for a couple hours, then came back into the city for some BBQ and World Cup. At this point I'm not sure who I'm rooting for, now that Spain and England are out. No more watching hottie Ballack :(

We had a nice little crowd at our house for afternoon food and the game, then we watched the Wizard of Oz. It's been a long time since I've seen it - I've forgotten a lot of the weird little things that go on. As a child I was absolutely petrified during the tornado scene, so I usually hung out in my room during the first 10 minutes of the movie, waiting for the "It's Over!" shout from my mom. Of course I still had a nightmare about a tornado last night. I guess those will never go away.

After stuffing ourselves, we headed down to the Mall. I was a little skeptical, not wanting to deal with the crowds, but as least we're in walking distance. You couldn't have paid me to get on Metro last night. Some people from church planned to stake out a spot and raise balloons. We didn't necessarily intend to find them, but we saw balloons in a perfect viewing spot, and lo and behold, it was our peeps. We sat on the hill, right next to the Washington Monument, facing Lincoln and the show. You can never be disappointed with that type of location! 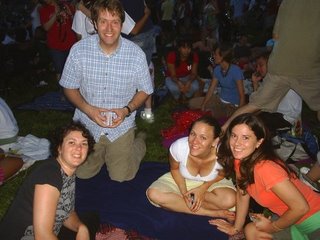 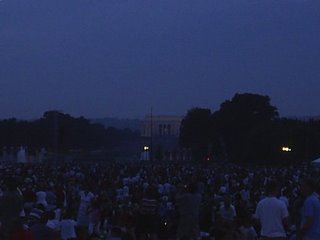 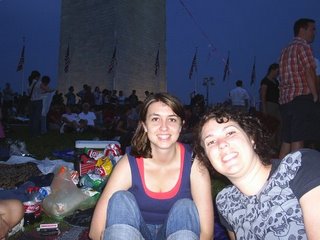 I tried to remember what I've done every year for the 4th since I've been in DC. I think I got it:
2006 - duh.
2005 - Just landed at National Airport from a trip to Phoenix as the fireworks were starting. I watched them from the airport windows.
2004 - Baltimore with Sam M. and Paul. Waterfront, music, etc. Then some random house party in Federal Hill.
2003 - NYC with Debbie, Jen, Kevin's secret burgers. Somewhere near the river, with an overpass blocking a lot of the view.
2002 - Just home from Spain. I think I hung out in Poteau, then headed to Tulsa the next day to start working at UCA camps...
2001 - Dinner in Gtown, with plans to head to the Mall after. It poured rain all through dinner, so Justin and I walked back to campus. Just as we arrived at our apt complex, we heard the fireworks starting. I think we climbed on the Henle roof to watch...or maybe we ran down to Village A....not sure.
2000 - Mall with Brooke and Erin. We walked there, and miraculously found Robin in a sea of 600,000. This was before I had a cell phone.....
- July 05, 2006

Superstar said...
This comment has been removed by a blog administrator.
2:59 PM

Ummm, Who is that girl with the breasts hanging out? I mean really can't she get it together!

I would assume, not that I know because I'm just a passer-by, the person you speak of superstar is one of three misskateers. She's probably, (again, not that I know) a really cool person that does not deserve your canter.

P.P.S. - Equalizer, you seem to be someone who likes shoes, not bewbs.