I won't say that I'm disappointed in Tuesday's announcement.  I'm just - meh.  I know you usually save some surprise announcements for the last minute.

I missed you last year because I was down under and I heard it was terribly overcrowded so I didn't feel left out for not going.  I can never seem to make it in even years anyway.  All the more reason to get excited about a 4th time appearance in 2011, especially now that I don't have to fly from the east coast to get there.  It's an easy drive. 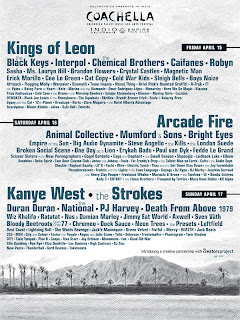 Maybe I'm reaching a musical saturation point?  All the bands that I've really wanted to see, I've seen.  And while Coachella is quite the experience, the set lists are short, you're running all over, and if there's an upcoming band you love, it's sometimes not as fun to cram under a tent area with 6400 other people who are on the early bandwagon.  Just wait til they tour alone at your favorite tiny venue.

Does this mean I'm getting old?  Ack!

But it's such a great value for three days of music.  And I already have hotel reservations that I secured last August.  I do wanna see the Black Keys.  Robyn!  Brandon Flowers solo (the Killers headlined Coachella in 2009 and I was actually very impressed).  Cut Copy. Marina and the Diamonds. Klaxons. Clare Maguire. Mumford and Sons.  Empire of the Sun. Paul van Dyk. Swell Season isn't totally broken up yet, though they are breaking up and maybe this is the last time I would ever see them?  I will cry.  Elbow. the Radio Dept.  Kanye?  Hmm...  Duran Duran.  I do need to see the National. Best Coast.  Ellie Goulding.

Of course I'm mega in love with Arcade Fire and having seen them twice at Coachella already, I know how phenomenal they are in this setting.  Still pivotal memories in my musical history.  Outdoor stage, beautiful sunset, mountains, palm trees, cool breeze, Wake Up drifting through the air, easily securing AF's spot as most memorable above all over bands that weekend in 2005.

I include those not to be music snobby, just to give you more acts to fill your time.

I won't be in Thailand, and while I can't get Friday off of work, my Saturday and Sunday are free! And here here to most of the bands you two listed (too lazy to list all of my faves).

Anyways, I'm up for a road trip!

King - you are allowed to be music snobby. Encouraged, even.

Megs - let's do roadtrip! Though I am waiting to see what my happen in my life before I commit to purchasing tickets to this splendid event.