After going through photos six months later, I realize what a good and busy summer I did have.  Seems like I packed a lot into July!

Most importantly, little brother came home from a two year mission in Argentina.  He was supposed to have a direct route home - Buenos Aires to Dallas, then a quick transfer back to Oklahoma.  We were all waiting on edge to have him home.

Just before his departure, I discovered online that his flight to Dallas was cancelled, and since we had no way of getting in touch with him, we didn't know what would happen.  He found out en route to the airport that he and his group would be split up onto different flights because of the cancellation, and sadly he got the short end of the stick.  His route was to Atlanta, then Los Angeles, then back to Memphis, which makes NO sense.  Once we found this out, my mom tried to get in touch with the travel agent (unavailable for a few hours because of meetings), and calling the airline directly didn't get her anywhere.

Upon landing at LAX early in the morning, he discovered that his flight to Memphis was delayed for 12 hours or something ridiculous.  He was able to call us and my mom and I debated his options.  I found him a Southwest flight leaving from LAX to Tulsa with a transfer in Phoenix, and I convinced my mom to just buy him a ticket to get him home.  Which meant that I got to see him in Phoenix!  I didn't think I'd get to see him for another month or so.

Poor kid had been traveling for 24 hours, wearing a suit the whole time, no change of clothes nor luggage, and was fairly exhausted.  He had a couple hours in Phoenix, so I brought him to my house where he could shower and clean up before heading home to Tulsa.  What a day, but I'm grateful for his safe return and his odd flight route through Phoenix. 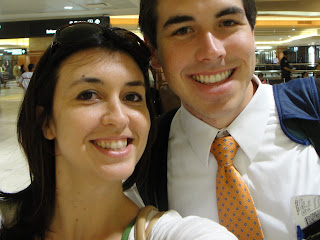 Also in July I watched a friend's dog at my house for a couple weeks.  Kind of awesome to have the dog  benefits, but temporarily.  This little dude's name is Schnitzel, and he is the perfect little dog!  He loved to burrow under the covers and sleep at the foot of my bed with just his nose sticking out.  The Schnitz has since moved to Chicago, which makes me a little sad. 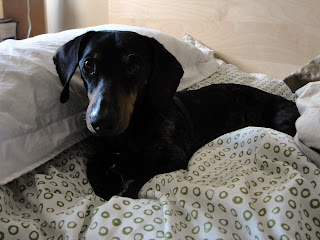 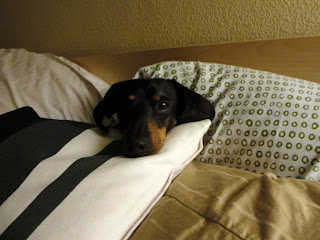 Cheap lawn seats for the Kings of Leon concert?  Check.  Except I had lawn seats the ONE night that it decided to rain in Phoenix in the summertime.  Thankfully it was only a few drops. 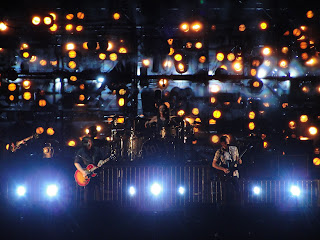 I also dyed my hair reddish.  Pictures aren't really the same, but you get my drift. 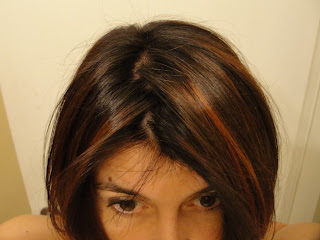 Markus Schulz came to Phoenix, and me and my new clubbing buddy went to dance the night away to some trance, despite being scared to death by the teenagers creating a rave scene around us.  I had to look up/ask some people why the kids all have pacifiers.  Glad I'm not a teenager nor have teenagers these days. 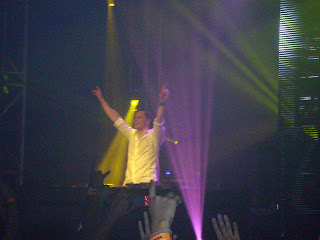 Miss Carrie convinced me to go on a roadtrip to Eagar/Springerville to visit her forest fire fighting friend and camp over night in Greer.  Just for fun, we decided to drive to the border since we were so close! 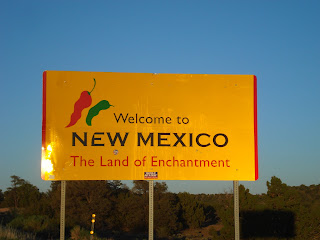 And we were little prepared for camping (I don't even have a sleeping bag), but fireman set us up with a fire, hot dogs, marshmallows, and made sure we wouldn't freeze.  I'm happy to save I lived through the night and didn't even worry about being out in the middle of nowhere at a primitive site down a random dirt road. 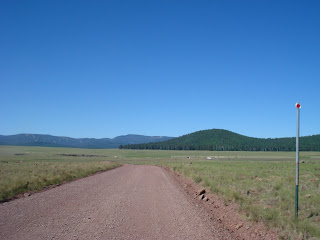 A couple weeks later I found myself headed back up to northern AZ (much cooler up there) for another night of camping.  I'd already reached my quota for the year!  The five of us made sure to stop at the Buffalo Bar and Grill on the drive up, where Miss Carrie and I had previously discovered the world's best sweet potato fries. 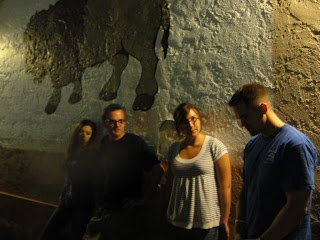 After driving through a campground and not finding any spots for our tent, we pulled off the main road and made our own camp spot. 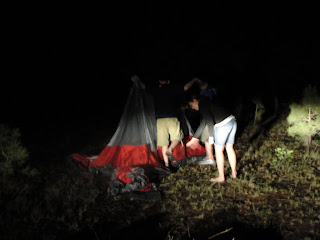 Camping's not so bad when you have air mattresses! 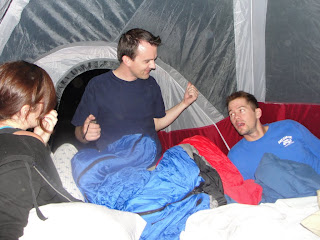 The next morning we went to Blue Ridge Reservoir, which was much more blue than green.  And kinda smelly.  No swimming there! 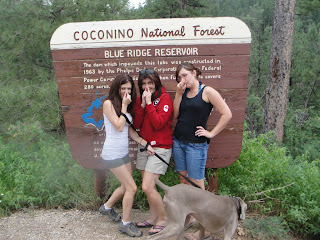 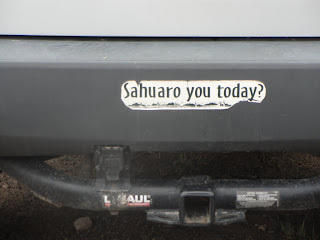 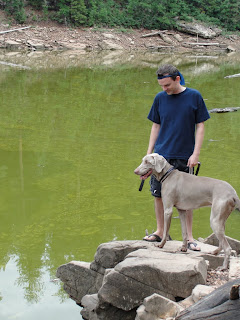 We took a really muddy backroad to get to Moqui Tower, a lookout for forest fires.  It's someone's job to sit there all day, just looking for smoke.  I think it'd be creepy to be up there alone, though the views are nice! 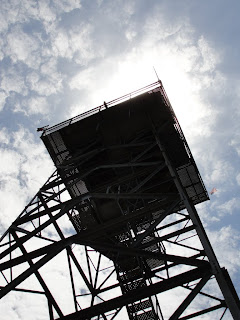 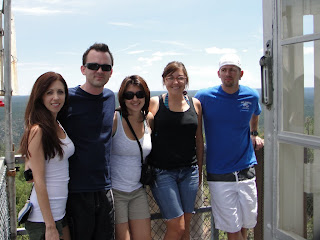 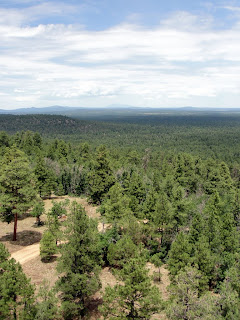 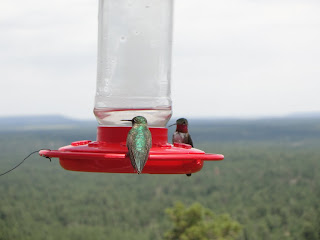 After the tower we drove around to another creek to have some lunch and wade in the water, after picking up some lunch supplies at the only little gas station near Happy Jack.  Then on the way home, we stopped at Fossil Springs, which was kind of awesome. 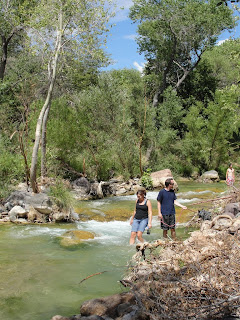 On the drive to the springs, there are signs telling people that the road ends, to turn back, but it's only because people want certain parts to be secret.  Yeah, right.  Though I was traveling with a local and we did take the shorter, secret way in!  Most people end up hiking several miles into the springs. 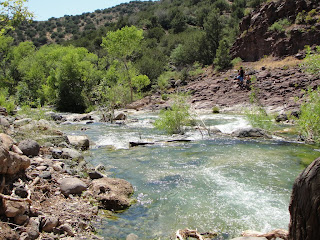 Kind of a scary dirt road, up on the side of a cliff with no guardrails (why does that make me so nervous these days), but it was a pretty drive and the cool waters were definitely worth the trip. 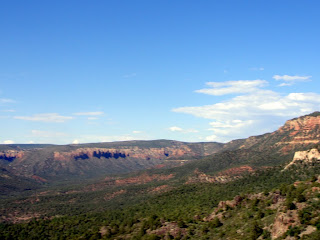 Back down in the hot Valley, a friend visited on a work trip for just one day.  We took a little trip out to Fountain Hills (a nice community outside Phoenix), which was fairly neat since I'd never been there to see the fountains go off. 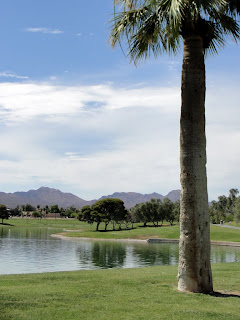 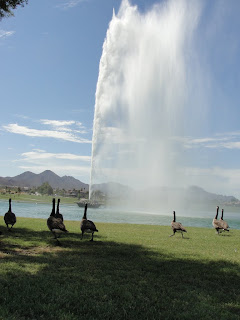 At the end of July it was time for another California trip, and this time I'd spend more time with mcb.  Which apparently went well. 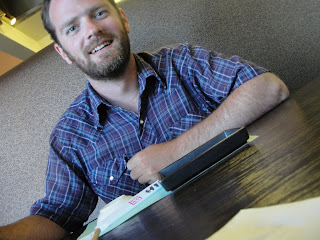 That weekend there was a massive volleyball tournament in Manhattan Beach, which gave us plenty of opportunity for fun and people watching. 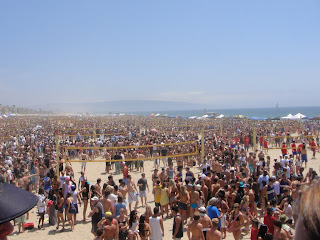 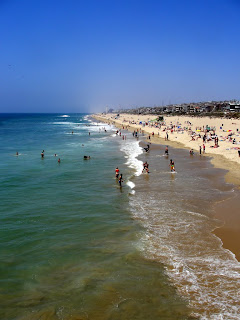 One team played with a pizza.  A pizza! 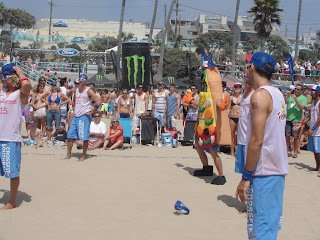 A bunch of Spanish guys were playing, hoping to capitalize on their country's good luck at winning the World Cup earlier in the month.  There were also Vikings, a girls team dressed like Carebears, and lots of other wackiness. 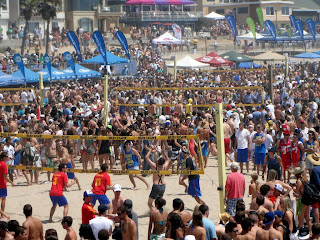 After nearly a week in California, it bid me adios with a nice sunset on the way home. 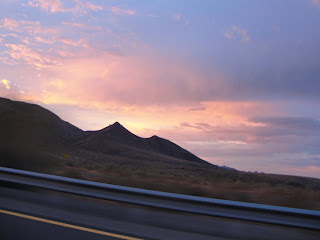 Fossil Springs looks awesome! That's still on my AZ wishlist. Perhaps I shall hit it up at the end of April when I come over for Candace's wedding... I'll need you to tell me the secret shortcut route to get there for sure!