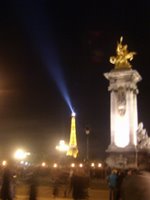 NYE welcoming 2005 was amazing. You can't go wrong standing on the banks of the Seine, watching the Eiffel Tower sparkle and glisten in the distance, and shouting Bonne Année with the French and their wine at midnight.

I was hesistant to try and out-do that this year, plus I think NYE is a little ridiculous to begin with, so I was content for a low key night. We settled on an 80s dance party at the Arlington Cinema and Drafthouse. The cover was only 15 bucks, I love 80s music, and the ball drop was going to be on the big screen. Sounds pretty decent, right? At least better than paying $100 cover for open bar when you don't drink.

Uh yeah, until we get there. We trekked all the way out to VA, drove up in front of the place and saw no one. The whole neighborhood was deserted. It was 10:30, not too early to begin the festivities, so we drove around the block again, hoping to see at least some activity going on. Got a little more on the 2nd try, four Hispanic guys rolling outta there. Hmmm.....

Jacin finally ran in to check the scene. There were people there, yes, but they were all my age during the 80s. Definitely not our scene. We hightailed it back to the District and headed for AdMo. Yes, we ended up at fratty frat Tom Tom, but the cover was only 20 bucks, the music was good, and we made cute friends and got kisses at midnight. Cheers! 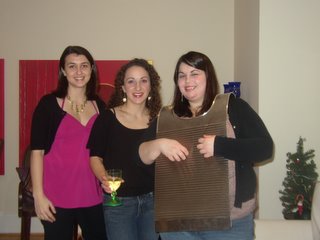 (and that is a wearable washboard that J is modeling, in case you're wondering. it also doubles as a musical instrument).
- January 01, 2006